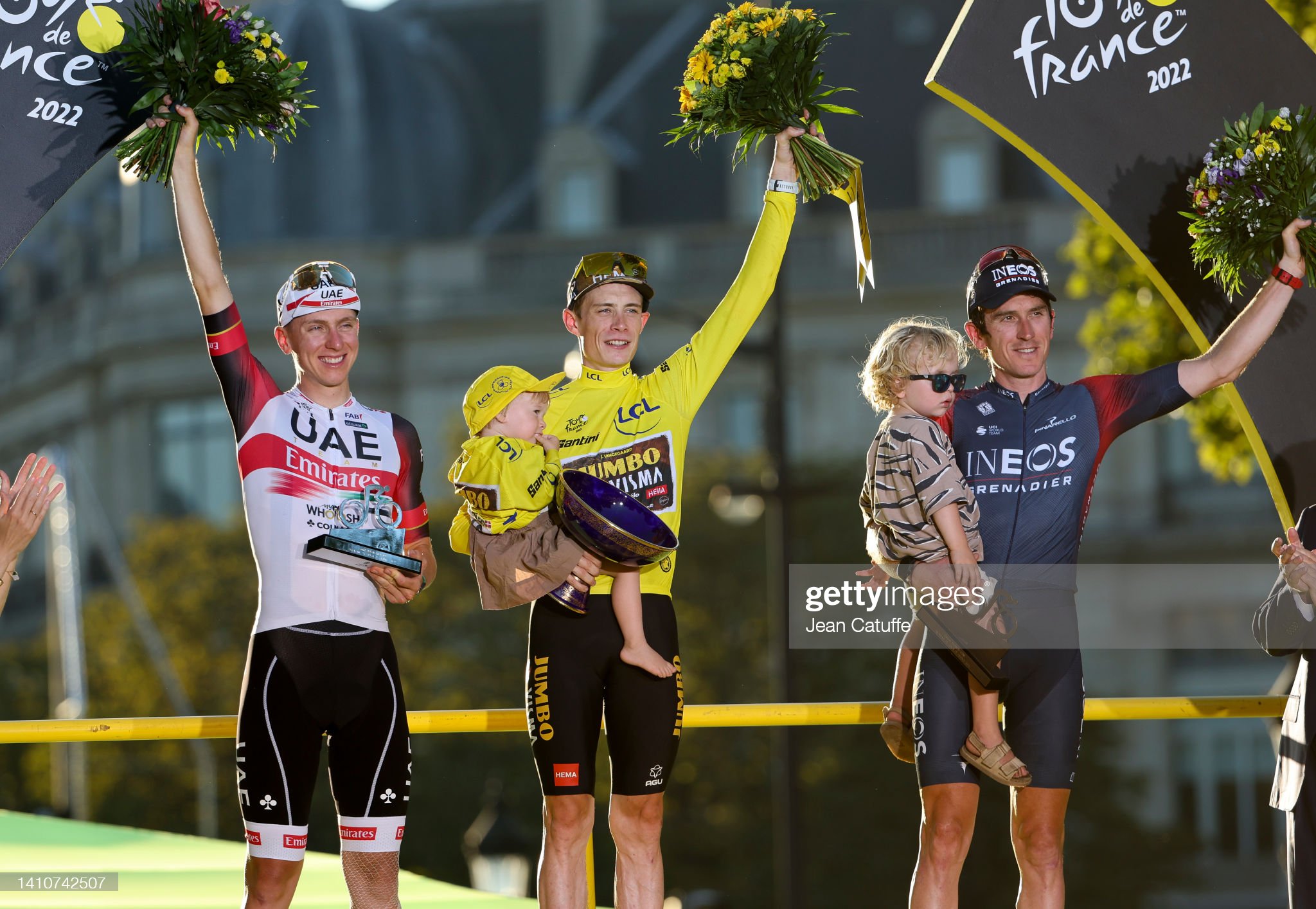 Geraint Thomas admitted he would not be celebrating as hard as in his younger days, but a podium finish at the Tour de France was still an excuse to raise a glass.

The 36-year-old Welshman finished third overall when the Tour concluded on Sunday – becoming only the ninth rider in the history of the sport to occupy all three slots on the podium during his career.

The 2018 winner proved himself easily the best of the rest after the sport’s new young guns – Jonan Vingegaard and Tadej Pogacar – had finished first and second respectively following a ferocious battle in the mountain stages of the race.

Thomas, who was runner-up in 2019, admitted advancing years and the fast-approaching Commonwealth Games road race in Birmingham, where he will ride in red for Wales, meant Sunday night was more sober than it might have been in the past.

“I’ll try not to celebrate as much as I have in the past, because I want to keep racing until October,” Thomas said.

In November Sa told me I’d finish on the podium at the Tour this year. I found it pretty hard to believe her. But hey, she’s usually right. This is for her and Macs for always believing, & for everyone’s support over the last month. There’s life in these legs yet. Vive Le Tour 👌 pic.twitter.com/XzGIdNUs4m

“When you can see the end of your career coming, you want to make the most of it. Celebrating, it’s different now. I’ve got a two-year-old at home. We will celebrate, but not as hard as I used to.

“That’s the one thing that gets worse with age: hangovers.”

At 36, this may have been Thomas’s last Tour. He has a contract for next year but admits he is not sure whether he will do one more.

“I’ve got a contract until the end of next year. I might stop. I might do one more [Tour].

“I’m still enjoying racing. I don’t just give up just because someone doesn’t believe I can do something. This year I’ve had a different programme in the run up. I did Flèche [Wallonne] and [Tour of] Basque for the first time and it gave me a new lease of life. It kept the body guessing. Never say never. We’ll see.”

In some ways, this third place was even more impressive than his victory four years ago that propelled him to national hero status in Wales.

Ineos Grenadiers had dithered over offering him a new contract because of his age while team boss Rod Ellingworth cast doubts over Thomas even making the team for the Tour let alone leading it as transpired.

Thomas himself thought he might be used simply as a super domestique in the mountains but eclipsed an impressive roster of race contenders within his own team to take third some eight minutes behind winner Vingegaard and two-time victor Pogacar.

This was Thomas’s 12th Tour de France. He has now finished in all three podium positions, having also helped Chris Froome to more than one of his victories.

When you think he is also a double Olympic champion on the track, has won Paris-Nice and Gent-Wevelgem, and remains the only man other than Eddy Merckx to win both the Tour de Suisse and the Criterium du Dauphine, you start to realise why his Ineos Grenadiers deputy team principal Ellingworth calls him “massively underrated”.

“When you think about it, Geraint has won more than [Mark] Cavendish or [Sir Bradley] Wiggins across the board, but he doesn’t have the same profile,” Ellingworth said.

“He has been absolutely brilliant for us. I honestly think he’s really underrated by the British public.”