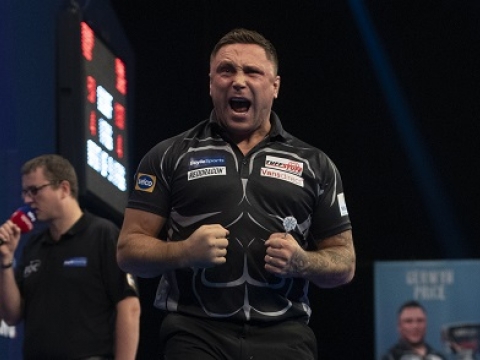 Gerwyn Price is ready to play like a champion in his bid for a hat-trick of Grand Slam titles – after being inspired by a wall of them.

The Markham darter reckons the tournament starts now as he faces Nathan Aspinall in his last 16 clash.

But Price needed a dramatic comeback in his final group game with Ryan Joyce on Thursday to seal his spot after surviving a match dart.

And the 35-year-old has revealed he was inspired by seeing his photo as one of five winners on the wall of champions at Coventry’s Ricoh Arena for his 5-4 victory.

“I kept looking over and saw my picture up there, and everybody else who’s won it,” said the world No 3.

❄️ @Gezzyprice back at in action at the Grand Slam of Darts this evening.

Looking to make it 3 wins from 3. Good luck tonight Gezzy, we are cheering you on. pic.twitter.com/pXsa47NDmU

“I said ‘I’m not out of this until that last double goes in’ and I stuck in there right until the end.

“Obviously my [picture] was the last one up there and I thought that I want that again. I’ve won it back-to-back and I didn’t want to give it up easily.

“I was under pressure but I never gave up.”

Price reckons the longer game – tonight’s match will be best of 19 legs – will suit him as he looks to emulate Michael van Gerwen and Phil Taylor by bagging that Grand Slam hat-trick.

“Now the tournament starts, in my eyes. You can’t judge on these group games, they’re little sprints.

“The further the legs go, the better I become and the more confident I become. I’ve got Nathan in the next round and it’s going to be a tough game, but I’m confident.

“I’ve got a little bit more in the tank and hopefully I can bring that out over the next couple of rounds.”

Price’s opponent in the quarter-finals if he beats Aspinall will be Dimitri Van den Bergh who ended Jonny Clayton’s hopes with a 10-3 victory.

Clayton had been hoping to join his World Cup winning team-mate in the last eight, but in the quarter-finals but the Belgian proved too strong.

And Van den Bergh reckons he will be a threat to anybody he now has to face.

“I feel like I played a terrific game from the start until after the second break – I kept Jonny under pressure and I was phenomenal in parts.

“I felt that here and there I could be a little more focused, but I’m really happy to be in another quarter-final. I’m on a winning streak and I want to keep this going.

“I’m buzzing. I’m really happy – inside I’m having explosions of happiness. I’m dreaming about winning this and I hope I can make my dreams come true again.”