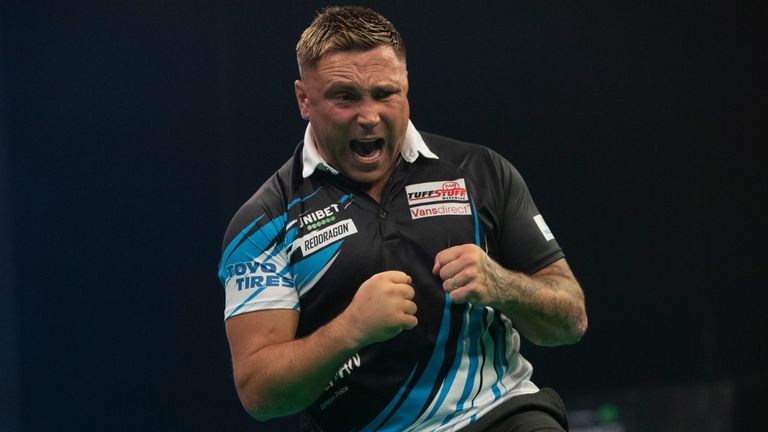 Gerwyn Price has won three of his last four events.

Gerwyn Price won a double in the bubble to clinch the PDC Autumn Series crown in Germany – then said he is the best in the world!

The Welshman followed up Thursday’s stunning comeback victory over Devon Peterson with a convincing win in Thursday’s final.

Price defeated Krzysztof Ratajski 8-5 with an 104 average for the day.

“Having won one, there was less pressure on me,” said the 35-year-old from Markham. “I was at ease.

“Winning leads to winning. I can go into the World Series finals in Austra this weekend now playing well and I’m looking forward to that.

“It’s just which one of me turns up.

“If I bring my A game I can beat anybody even Michael (Van Gerwen). That’s the difference in the space of 18 months, winning just breeds confidence.

“If I’m at my best and he’s at his best I still think I can turn him over, that’s how confident I am.

“I want to win everything. I know it’s not going to happen as the standard is so high.

“Every tournament I go to I want to win and I think I can win. I’m not scared of anyone anymore – the only person I’m scared of is myself.

Of his final, Price added: “I let two legs slip putting myself under pressure. I’d played brilliantly all day and that was the worst I’d played but I got over the line.

Price admits it has been a tough schedule going straight to the five-day Autumn Series in Niederhausen after just missing out on the Premier League play-offs.

“It’s tough, playing 12-13-14 days of Premier League then coming away and doing these.

“It’s gruelling. It feels like you’re just locked up, you’re in prison, you can’t do anything.

“You’re stuck in the hotel, playing darts for five days of the week. With the virus around it gets a bit boring.”