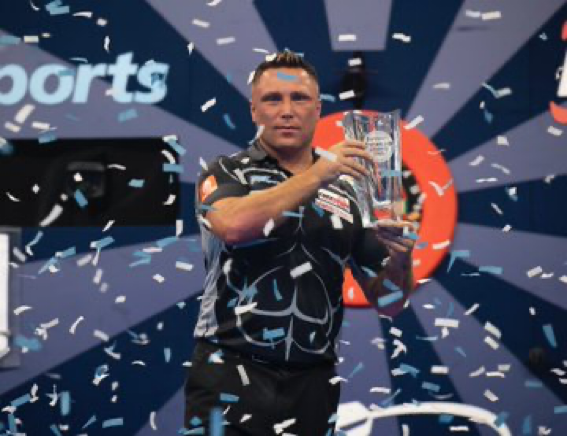 Gerwyn Price now No 2 in world after World Grand Prix win in Coventry.

Gerwyn Price continued his astonishing run of form as he lifted the Boyle Sports World Grand Prix title for the first time.

Price pocketed the winner’s cheque of £110,000 to move to No 2 in the world behind Holland’s Michael van Gerwen.

But after claiming his fourth title in his last five events Price proved he is the man to beat at the moment.

“I am over the moon,” said the Markham darter, who had an emotional reunion with his family via video link after his victory.

“I was under pressure even at 4-1 up and I was thankful to get over the line.

“It was a difficult game, probably looked a bit easier than it was.

“I don’t know if I was impressive all the way through. I did enough to win in patches.

🎙️ Listen to the thoughts of the 2020 World Grand Prix winner – Gerwyn Price – and he finally catches a glimpse of his family on the big screen. #LoveTheDarts #WorldGrandPrix pic.twitter.com/Ed6jea2J0R

“It’s the winning doubles that matters and they were the ones I was hitting at crucial times.

“It was a good tournament for me. I’m happy to get over the whitewash and get another major win.”

Price’s victory against the pre-tournament 200/1 outsider was his third official PDC ‘major’ title and 15th PDC crown of his career.