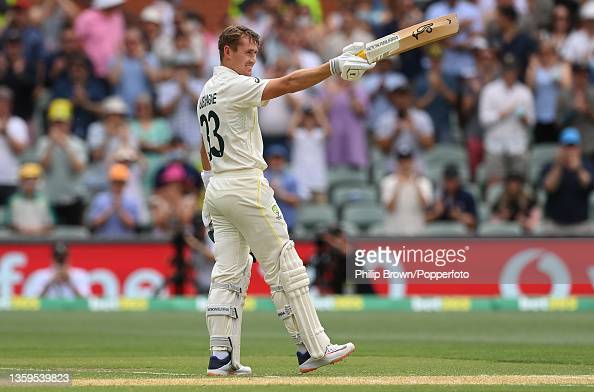 Marnus Labuschagne celebrates reaching his century during day two of the Second Test match in the Ashes series between Australia and England at Adelaide Oval. Pic: Getty Images

Glamorgan’s Australian run-machine Marnus Labuschagne enjoys winning games for his team more than any personal milestone, the 27-year-old said after his sixth test century consolidated the position of the hosts in the second Ashes test against England on Friday.

The South Africa-born Labuschagne – who is due to return to play for Glamorgan next summer along with fellow Aussie test star Michael Neser – top-scored for the dominant hosts with a patient 103 to help Australia post 473-9 before declaring their innings in the day-night contest.

Cricket is never boring when you have characters like Marnus Labuschagne.

Labuschagne’s current average of 62.48 is second only to legendary Don Bradman’s benchmark of 99.94 among players who have batted in 20 innings or more.

Currently number two in the official rankings for test batsmen, Labuschagne dismissed the compliment as if it were an England bowler.

“A couple of nick offs and you are right down the pecking order.

“I just think about scoring as many runs in each innings to try and win the game. Winning games for Australia is by far the most enjoyable part.”

Labuschagne’s 172-run stand with David Warner helped Australia weather an early wobble but it was not a flawless knock.

Labuschagne was dropped twice by England wicketkeeper Jos Buttler on Thursday and Ollie Robinson bowled him off a no-ball before eventually trapping him lbw.

How could you miss that?! 😱

Labuschagne was also stuck in the ‘nervous nineties’ for a staggering 54 balls.

“I was grinding away, I never really felt in, I never felt any of the runs I was making were easy,” he said.

“I think as we play more pink-ball games there will be more strategy and tactics, managing the night sessions and managing the tougher times to bat and the easier times to bowl, and vice versa.”

Getting through the day and getting the opposition to bat at night where possible was key in a pink-ball match, he said.

“The ball seems to be doing a little bit more at night, the wicket was doing plenty the whole game.”