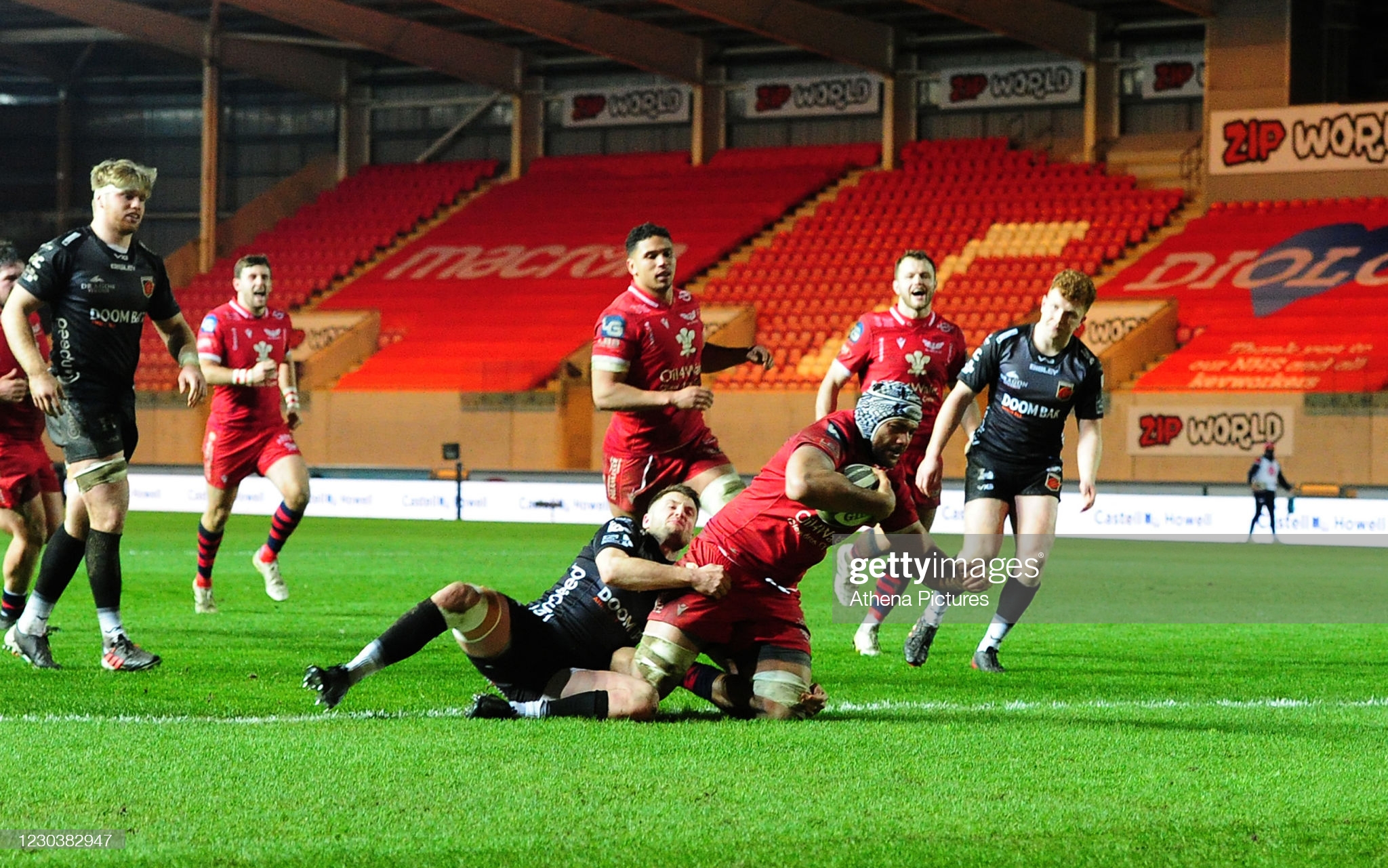 Scarlets head coach Glenn Delaney has labelled Sione Kalamafoni as the region’s “galvaniser” after his try helped them beat the Dragons, 20-3, on New Year’s Day.

Second-half tries from the forceful No.8 and replacement outside-half Sam Costelow were enough to get Delaney’s side over the line in a match that will mostly be recalled for the worrying arm injury suffered by Dragons forward Taine Basham.

The Wales hopeful is to undergo X-rays on a suspected broken arm and likely lengthy spell out, with the painful injury forcing him off the field after 24 minutes.

That eased the way for a comfortable, if heavy weather win for the home side, with Tongan Kalamafoni proving the most influential force.

Dan Jones and Costelow also kicked 10 points between them while all the Dragons could muster was three points from the boot of Josh Lewis.

“Sione has been doing that for a long time,” said Delaney.

“The bit that everyone sees is his explosive efforts during the games, the bit people don’t get to see is how he is in the environment around the young lads.

“He is a real galvanizer. The boys are enjoying playing with him and he has these big moments in a game and that is why we wanted him to come here.

“We felt he could add to the attacking intent to give us a genuine point of difference and in a game like today, when it is the balance, you need someone to step up and give us that platform and I thought he did that very well.

“It was a compelling contest of a different nature and there were a lot of errors out there for sure.

“The derby games are pretty unique and they bring out the best and the worst in terms of the individual competition and contest. You saw a full blooded set of blokes out there committed to what they were trying to do.

“Defensively I thought we were resolute and we didn’t feel like we were in too much danger there but we would have liked to have done a little bit more with the ball.”

Scarlets and Wales second-row Jake Ball, who this week announced his departure back to Australia at the end of the season, was forced from the field with a knee injury after 16 minutes while Ryan Elias was also forced to leave the fray early.

The Dragons won back-to-back games at Benetton and Glasgow in November and December but have since lost four in succession after being hit by injuries, coronavirus positives and self-isolation.

“We were on such a high going into Europe,” said director of rugby Ryan.

“Ten years of waiting for the Champions Cup, on the back of two wins when we played really well and with our internationals coming back.

“Then our world turned upside down. What do we do, curl up in a ball and feel sorry for ourselves or keep fielding sides? We have kept fielding sides and they have changed every single week.

“Who knew of Ben Carter a few weeks ago? The same will be said about Aneurin Owen.

“We’ve got seven, eight, nine of our starting XV not here at the moment. Rather than curl up in a ball we just ask who is next.

“It is really easy to just live your life off wins and losses. Sometimes that hides good things that are going on.”