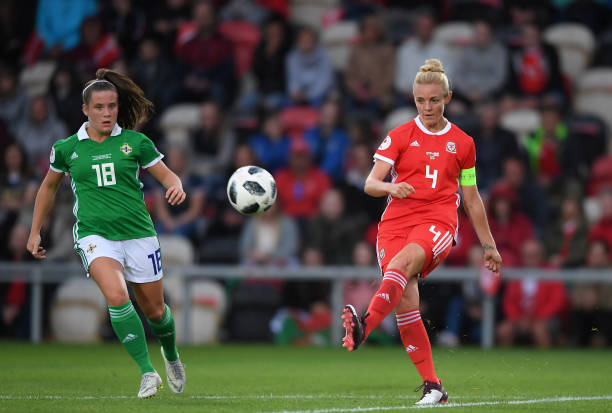 Sophie Ingle in the running for prestigious Puskas award for her wonder strike for Chelsea. Pic: Alex Davidson/Getty Images

Wales captain Sophie Ingle admitted she was ‘shocked’ after discovering she had been shortlisted for the Fifa Puskás Goal of the Year award.

The Chelsea ace has been nominated for the prestigious worldwide award for her magnificent strike at London rivals Arsenal at the start of this year.

“I was really shocked, we were at breakfast and someone said that I’ve been nominated for goal of the season. I was like ‘what do you mean what goal’,” said Ingle, who will be up against the best goals in men’s and women’s football in 2020.

“I then checked my Twitter and I’ve been tagged in a lot of things and it’s just amazing to get the recognition.”

Ingle’s goal came in a 4-1 win against rivals Arsenal back in January with her team going on to win the Women’s Super League.

“Like I said in the past I just hit it really well luckily and it puts Wales on the map again which is amazing for our country,” added Ingle, who is on a shortlist of 10 other nominees compiled by a panel of football experts.

“It is really nice to get recognised and it’s such a massive award. I’ve probably never noticed it before how big of an award it is.”

Ingle isn’t the only women to be nominated for the award with fellow WSL player Caroline Weir also among the contenders.

“It’s nice that women are getting recognition and not just me, Caroline Weir with her goal against Man United is amazing for women’s football.

“Her’s was a great strike and both of our goals were from a derby game which makes it an even better goal in a way.

“There is a lot of WSL players in that category that has been nominated for other individual awards and it’s amazing for the league.”

Ingle was speaking as Wales continued their preparations ahead of their final game of the Euro 2022 qualifiers against Belarus at Newport’s Rodney Parade on Tuesday.

“We love coming into camp it’s only been about three to four weeks since we last meet up,” added the 102-cap stalwart.

“The girls have been raring to get into camp, we’re at the Vale hotel as well which is lovely. It’s where the men stayed, we have our own pitch where the men use and it’s great facilities.”

Wales still have a chance of qualifying through a play-off spot but will have to rely on Northern Ireland dropping points against Belarus on Friday.

The 29-year-old said: “Like I said it’s out of our hands and we’re just focusing on ourselves and what we got to do on Tuesday to beat Belarus.

“We’ll be training tomorrow so I don’t think any of the girls will be watching the game. We are just focusing on ourselves and all we can do to get the result on Tuesday.”