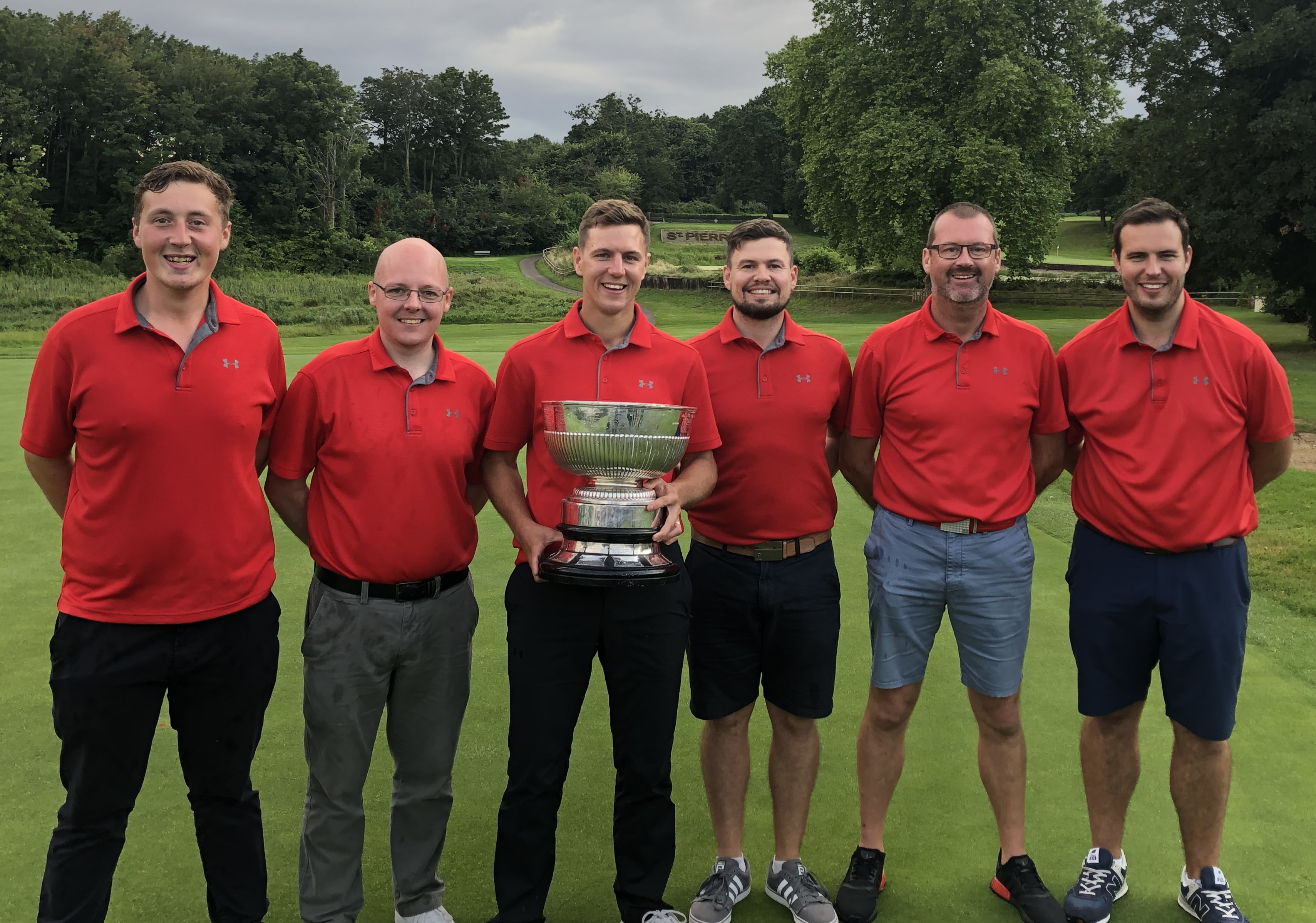 Mountain Ash golfers won the Welsh Team Championships for the first time in their history, battling the elements as well as opponents in St Pierre.

The Cynon Valley club had not got past Round Two in more than a decade, but turned round a semi-final deficit at the halfway stage against hosts St Pierre and then claimed a tight final against Wrexham with former Welsh amateur champion Luke Thomas clinching the crucial point.

A birdie on the 17th to go one up against Daniel Lloyd, followed by a 2 iron to fifteen feet at the 240 yard 18th at the Monmouthshire course was enough to see Thomas add to victories for former Wales squad player Matthew Delahaye and captain Rhys Carhart.

“To put our name on the trophy means a lot to the club,” said Carhart. “It is the first time we have won the championship, in the last 10 years at least we have never got past the Saturday morning.

“Playing at St Pierre was a massive contrast to our course, which is a lot shorter, not as tight and the greens are slower, but we are used to digging deep in the valleys and what really brought us through was the character of the boys.

“The winds on the Saturday, up to 40 mph, were the worst I have played in and that causes problems on a course like St Pierre, but we dealt with that and coming from a mountain course we are used to bad weather and wind.”

Mountain Ash kept the same order through all their matches as they beat Rhos-on-Sea, Bargoed and Holywell on their way to the semi-final clash with St Pierre.

Glamorgan county stalwart Ian Flower went out first, with 2009 Welsh Amateur champion Thomas going out second. Thomas had won the Welsh Team championships before with Radyr, but has returned to his home club after starting a family.

Delahaye, who broke his leg while in the Wales junior squads, went in the middle of the order with Carl Boobier and Carhart filling the fourth and fifth places. Louis Cobley was an unused reserve.

“Having Ian and Luke at the top of the order meant we always felt we would get something from the early matches,” said Carhart, Glamorgan county captain.

“Ian is really consistent, has been club champion 13 times, played more than 70 for the Glamorgan side and currently heads the county order of merit.

“Luke has come back to the club where he started as a junior, he is a great character, a brilliant golfer and having someone with that talent in your team is great. He hasn’t been having the best year, but pulled out his best form when it mattered.

“That meant Matthew, Carl and myself had to get a couple of points to see us through and we had some strong performances.

“We gained confidence as we went through each round. We were 4-1 at the halfway stage against St Pierre, they had a lot of support, but we managed to turn it round.

“Then for the final we had quite a lot of support from our club, they had played the Sunday morning comp and then come along to St Pierre, which was great to see some familiar faces in the crowd.”

Wrexham beat Southerndown in the other semi-final, the top match between Wales internationals Tom Williams and Kieron Harman proving key as Williams took the honours in a 3-2 victory.

Woodlake Park, Whitchurch (Cardiff) and Conwy were the other quarter-finalists.
“Congratulations to Mountain Ash, it was a strong team performance in every match which saw them through to take the title,” said Wales Golf Championships Manager David Wilson.

“Also congratulations to the St Pierre club, not just for reaching the semi-finals but also for staging the event so well despite some difficult weather conditions.

“The fact we were able to get through the event successfully was a tremendous tribute to the staff and volunteers at St Pierre.

“This event bringing together the 32 clubs who have won through to the finals is always one of the highlights of the club golf calendar in Wales. It was great to see such a high standard of play.”