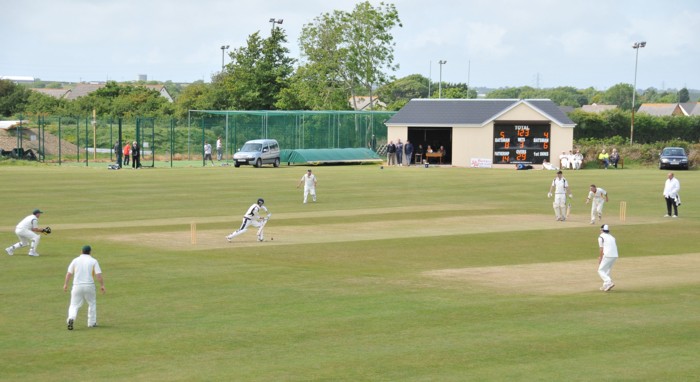 Welsh cricket has never known a summer like it and those involved are praying that next season is a whole new ball game. Neyland Cricket Club were just one club that had to get used to a very different world, as Tom Pritchard reports.

Very few cricketers in Wales, myself included, would have expected to put the whites on this summer after the pandemic appeared to have put paid to any chances of leather on willow.

However, at the beginning of July, it was announced that recreational cricket could return, albeit with a number of new, strict measures to ensure the safety and wellbeing of those involved.

So, just how much work went into making sure clubs were compliant and players could compete with peace of mind?

Robert Bellerby, Neyland Cricket Club’s long-standing groundsman, was at the forefront of the operation to ensure the Pembrokeshire side could play in friendly matches as well as cup competitions in July and August.

“This is my 28th year as head groundsman at the club, and it has definitely been the strangest one,” he says.

“The announcement by the First Minister on July 10 that cricket could be played from the 13th did catch me out.

“Though I had advised the club that we were ready to play at short notice I was expecting a two week lead-in, not three days.

“I had to tell the team captains that they would need to wait a bit longer as an individual wicket normally takes seven to 10 days preparation to play. As it was, we had a successful in-house game in six days.”

A number of new working practices had to be adopted, which Bellerby found strange at the beginning, but ultimately they were vital in ensuring that matches could be hosted.

“I had to use anti-bacterial spray on the wickets, bails, boundary flags, fielding discs, the scorer’s table, chairs and the electronic scoreboard remote,” he says

“Doing all of this was unusual, but if it meant we could get games on I had no problem with it.”

Another new guideline was for batsmen to stand two metres from the edge of the pitch to ensure they were distanced from the bowler.

While Bellerby understood why the measure was introduced, he admitted it wasn’t ideal from a groundsman’s perspective, as it meant batsmen would be running down the middle of the adjacent pitch, rather than its edge as would be the case in normal circumstances.

Cricket clubs were told that they could have a maximum bubble number of 30 people in attendance at matches, which consisted strictly of players, coaches and officials (umpires and scorers).

“To ensure the maximum 30-person bubble during a game, I had to rope off an access route onto the cricket ground and ensure the entrance gate was locked after the teams and officials had arrived.

“Thankfully, the ground is fenced off on three sides which helped. It did not feel good keeping spectators out of the ground, but it is what we had to do to allow cricket to be played.

“The provision of anti-bac stations is also something we never did in past.”

There were also a host of new guidelines which players had to follow.

Every six overs, or 20 minutes – whichever came first – players had to leave the field for a hand sanitisation break.

Talking points, unofficial awards, and my XI of the summer. And undoubtedly you’ll all agree with everything.*

They were also encouraged to return the ball immediately back to the bowler after each delivery, in order to limit the number of hands it could potentially come into contact with.

Whereas bowlers would – in normal circumstances – hand their cap, sunglasses or jumper to the umpire, this was not permitted, and therefore the only options were to either run all the way to the boundary and back to drop the items off, place them behind the stumps or – if they were feeling confident – place them at the start of their run-up and risk giving away five penalty runs if the ball made contact.

Reflecting on the season, Bellerby says: “A total of 18 fixtures played at home, including six on our artificial second pitch, is 18 more than I thought would happen.

“Most of these games were friendlies, and I feel all players were happy to have the chance to play some cricket.

“For me, it was certainly a first to have both the 1sts and 2nds playing separate home fixtures on the same square, on the same day.”

Neyland, as it happened, went on to have a very successful campaign, with the first team winning the Harrison-Allen Bowl – Pembrokeshire’s premier cup competition – while the third team won the Ken Morris Memorial Cup for the first time.

Bellerby is grateful to those who were key in allowing the sport to return and is already looking ahead to next season.

“I feel that Cricket Wales did a lot of successful lobbying with the Welsh Government to allow cricket to be played and we should all be thankful for that.

“They also did a good job of keeping us informed from the start of lockdown. They certainly gave me clear advice as a groundsman from the very beginning.

“Hopefully, we can return to normal next year, but before then I still have to do the normal autumn end-of-season maintenance before moving on to pre-season work in 2021.”