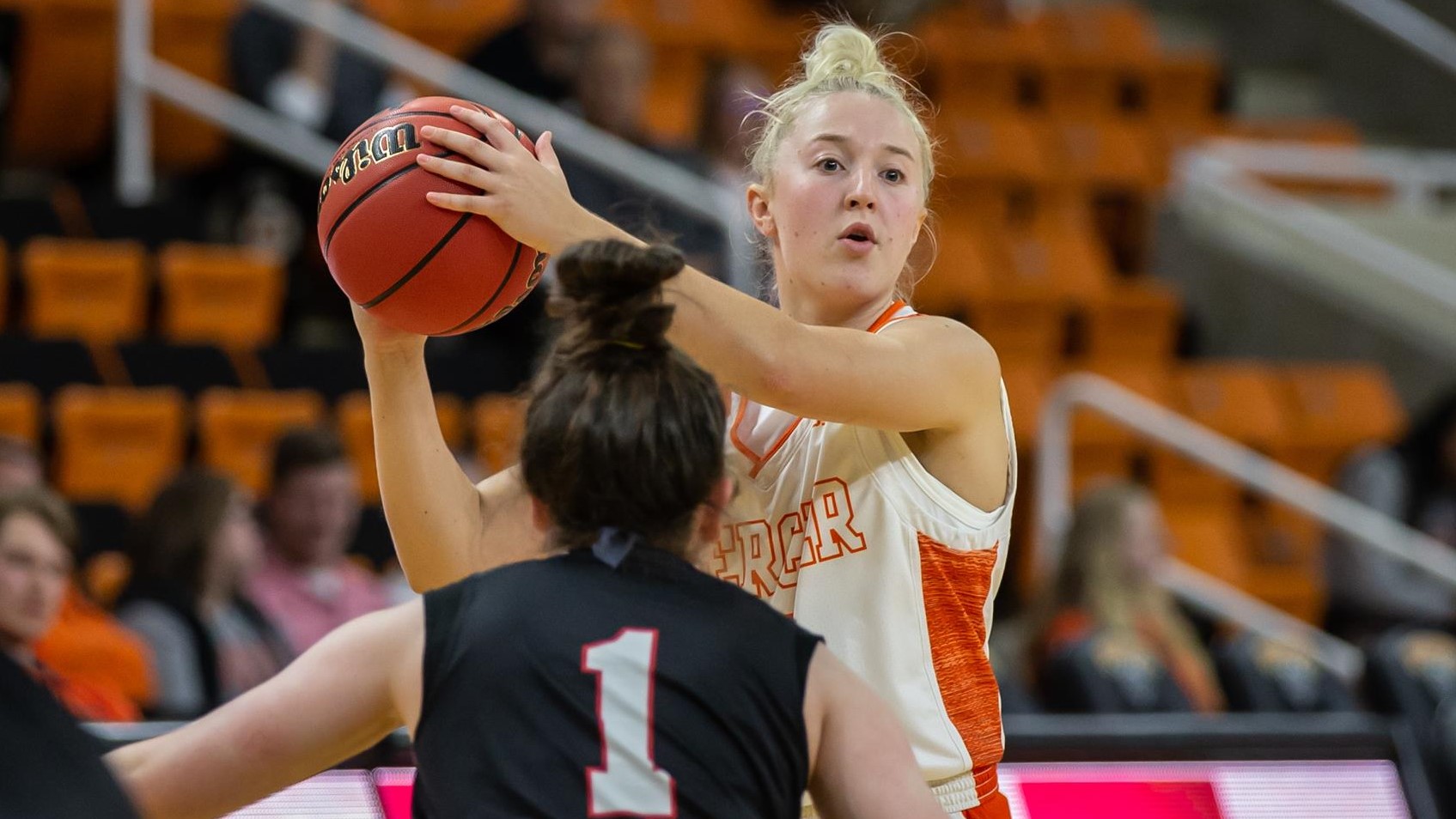 Basketball enjoyed global boom time at the start of lockdown, but it had nothing to do with live matches on court. Instead, Michael Jordan and the Chicago Bulls went into living rooms around the world via the TV documentary series, The Last Dance. For current players – like Wales and Great Britain international Emily Stradling – time has stood still as she tells Graham Thomas.

Emily Stradling should have spent June in Georgia, USA – preparing to further enhance her reputation as the best female basketball player Wales has exported across the Atlantic.

Instead, the student of Mercer University in the town of Macon is back at home in Porthcawl, wondering when she will next pull on the distinctive orange vest of her team, the Bears.

The global pandemic has ruled out any hope of easily jumping on a flight back to the States, so 20-year-old Emily – a former captain of Wales U18 and a Great Britain international – has spent the past few weeks keeping fit at home and doing a remote internship online.

“It hasn’t been quite what I planned,” she admits. “But I’ve spent time with my family and finishing off some of my classes so it hasn’t been time wasted.

“At the moment, we don’t know when things will start again, or how, so it’s difficult to know when I’ll be meeting up with the rest of the team and having workouts, pre-season and going again for next season.”

If her patience can be rewarded with the kind of impact she made in her two seasons so far in US women’s college basketball, then Emily’s final year could be worth keeping an eye on.

Mercer – 85 miles south of Atlanta – is a university with a rich history in both men’s and women’s basketball who offered the former Cardiff Met player a scholarship on the basis of her performances for the Archers as a 17-year-old and the eyebrow-raising quality of her highlights video.

In her freshman year, she was part of a Mercer team that earned a 25-7 win record in their regional southern conference to enter the all-American national college tournament.

They took on the might of the University of Iowa (student population 30,000, four times that of Mercer) and led 51-50 going into the final quarter.

Had the minnows and their Welsh rookie pulled off the victory in front of 4,000 fans then it would have been akin to Swansea City dumping Liverpool or Manchester City out of the FA Cup, but in the end Mercer just lost out, 66-61.

In her second season, Mercer have not quite matched those heights, but Emily has established herself with a string of personal college best performances and has savoured playing against major American universities in front of huge crowds.

“Playing in front of thousands of people is an incredible feeling,” says Emily who was coached at Cardiff Met by Ieuan Jones and former GB international Stef Collins.

“When the ref blows his whistle and the home fans don’t agree, then the place goes absolutely crazy. It just erupts.

“When we played in New York and Washington, we flew there and when we played the Iowa game we took a chartered flight – our own team, staff, fans, cheerleaders, the whole lot. It was crazy.

“Everything is on a big scale, with radio and TV coverage of the matches, and the traditions of college sport are really respected.”

It’s all a far cry from Welsh college basketball or even the international game in Wales which often struggles to assert its identity.

The Michael Jordan and Chicago Bulls TV documentary, The Last Dance, may have been part of the national sporting conversation in Wales during lockdown, but Emily admits she couldn’t even imagine how to go about playing basketball in America three years ago – never mind try and do it.

“Outside of my little bubble, I had so little knowledge of basketball and what was out there, I had no idea it was even possible for me to go and play in America.

“Nobody here in the UK really watches college basketball in the US – I didn’t even watch NBA basketball until my dad got a subscription – and so I had no real experience outside of my own world.

“There weren’t any role models for me to follow. It might have been a little different in England, with the academies, but I do think things are changing a bit and what seemed like just a dream is now becoming more attainable.”

The ultimate dream for Emily and those on court with her, might be to graduate not just with academic honours but to a place in the women’s NBA.

A total of 36 players were drafted by the WNBA last year, but while LeBron James earns £26m-a-year in the men’s game, the top paid woman is Phoenix’s DeWanna Bonner on a more modest £103,000.

Emily, who may stay on at Mercer past next year after she graduates in graphic design and communications, says: “Making a career in basketball is very difficult, for men and women, but the difference is that for women the pay is not that incredible.

It’s that time of the year 🐻🏀 fans! be sure to renew your season tickets now‼️

“A lot of the women in the WNBA play a second season overseas in their year, just to earn enough money.

“You can make it one sense, but still not really be making it another.”

One thought on “Grounded, But Not Ground Down . . . Emily Stradling Still Has Georgia On Her Mind”