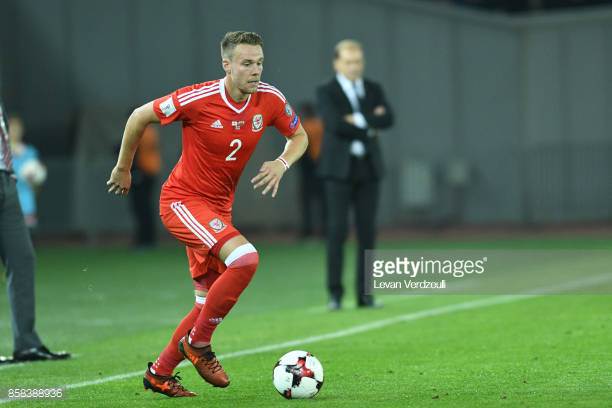 Chris Gunter becomes Wales’ most capped male international when he makes his 93rd appearance for his country, against Albania in Elbasan. Dai Sport’s Terry Phillips first watched Gunter play when he was a young schoolboy with Cardiff City almost two decades ago.

Newport-born brothers, Marc and Chris Gunter, would stand just off the M4 motorway at High Cross with fellow Bluebirds fans and wait for a Cardiff City Supporters Club coach to pick them up.

They were regulars on the ‘pop n crisps’ bus away trips growing up and that was a regular away day experience before Chris earned a place in the club’s under-16 team, saying: “I’d been a Cardiff fan since I was young and a season ticket holder until I broke into the youth team and played on Saturdays.

“I had to stop travelling away the, although I did get to the 2003 League One play-off final against QPR. A great day.”

“I was at Cardiff from the age of seven to 18,” he said. “The club was a large part of my growing up.

“It was a brilliant time for me.

“I was pretty nervous before my first team debut for Cardiff and the fact that it was televised didn’t help. That made me even more nervous. The advantage was that I was able to record the match and watch it back.”

This evening, in Albania, Chris will win his 93rd Welsh cap – and he will be joined by family and friends among around 2,000 fans making the trip from Wales.

It’s 11 years since Chris made his senior international debut at the age of 17 – he was and is the youngest to play for Wales – and in the match against Albania he will play alongside Gareth Bale and Aaron Ramsey, close friends who both played roles when he made the move from Cardiff to Spurs.

He spoke to Bale about Spurs before committing to the North London club – and then shared a flat with Arsenal’s Ramsey.

The 18-year-old Chris the first Tottenham signing for head coach Juande Ramos, who agreed a £2m fee with the Bluebirds.

Gunter’s father, Gerald, confirmed: “Christopher spoke with Gareth Bale and he helped make up his mind.

Chris moved on from Spurs to Nottingham Forrest and, for the last six years, has been a Reading regular, and has made 486 first team club appearances in his career.

He is still only 29-years-old and surely destined to go past the 100 caps landmark, having started in a staggering 63 consecutive matches for Wales from 2010 onwards.

Chris is a quietly-spoken, modest young man who was voted Championship apprentice of the year during his time with Cardiff, who took his studies and his football seriously growing up.

He earned a BT National diploma in sports studies and Steve Ellis, still the club’s Head of Education and Welfare, said: “Chris worked terrifically hard both with his football and education.

“He would often come back for one-to-one sessions to catch up on his college work and it was commendable the way he adapted to ensure he was successful in all elements of the ASE (Apprentice in Sporting Excellence) framework as well as with his football.”

Chris becomes Wales’ most capped male footballer thousands of miles from home, in front of passionate and loyal Welsh supporters, and he says: “It’s fitting in a way to do it in front of those fans.

“A lot of those who will be in Albania have travelled far and wide to places where I’ve picked up a lot of my caps.

“To do it in front of those fans who spend their hard-earned money getting to all these places is a huge honour.”

He played for Wales at under-16, under-17, under-19 plus under-21 level and made his senior debut against New Zealand.

“I’d been involved with the under-21’s so it was really pleasing to be invited into the full squad,” he said. “The team for the New Zealand game was announced on Friday afternoon and it was great feeling to be named in the side with so many experienced and established players.”

Terry Moore, now assistant Academy coach at Southampton, was youth coach at Cardiff City when Chris came through the system and Chris says: “He was my coach from probably under-12s until under-16s.

“I will always appreciate what he did for me and the part he played.”

Chris is a disciplined professional who works hard to stay fit and sharp, saying: “It is something take pride in really.

“There are things you can do away from the pitch to help yourself. You always have to get enough rest and recovery.

“At certain times when your mates or family are doing other things you have to turn it down. Sometimes it can be quite boring, but ultimately your job is to make yourself available for the manager and for him to know that he can call upon you.

“I have a routine that works and I try to stick to that. It often results in being asleep by 10pm which a lot people find bizarre or boring, but it’s worthwhile when I know I can go out there and play game after game.

“I’ve always been quite a boring, sensible sort of guy and it probably goes back to when I was young. I always did what was asked of me.”

Chris has always been a coach’s professional, a player willing to play any role asked of him if it helps the team. That is far from boring. He always puts the team first – and right now that’s fantastic for Wales and Reading.