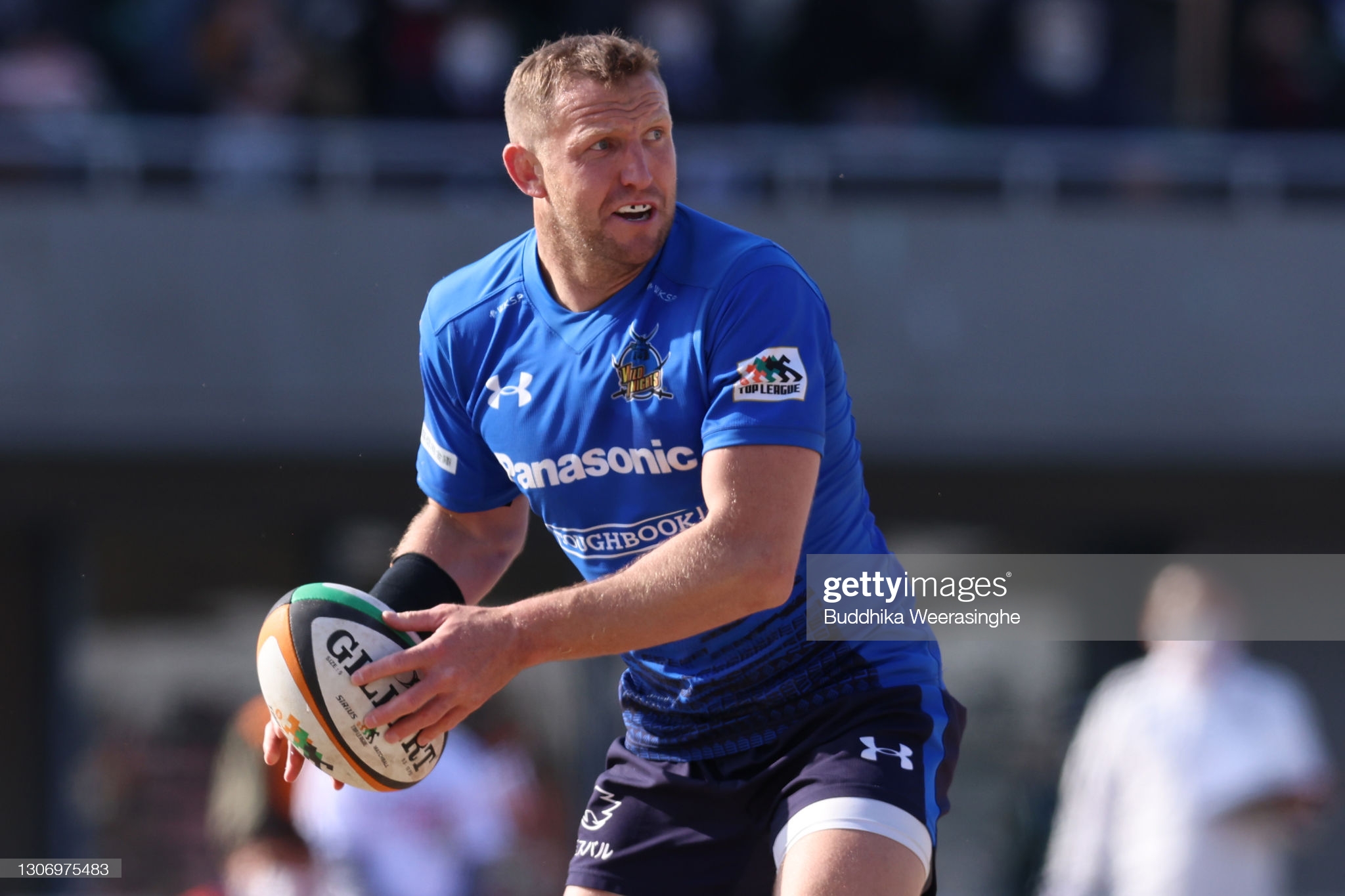 Hadleigh Parkes’ first season in Japan has seen him win the Six Nations bragging rights with team-mate George Kruis and move to within one game of a first Top League title.

Now, only the ‘Golden One’ – his former Hurricanes colleague Beauden Barrett – stands between the ex-Wales centre and more silverware in the Far East.

Parkes, now 33, won 29 caps for Wales but left the Scarlets and Welsh rugby last summer for a move to Japan with Panasonic Wild Knights where he plays alongside England’s Kruis.

In the early hours of Sunday morning, Parkes will be a vital figure for Panasonic in their Top League final clash with a Suntory Sungoliath for whom New Zealand superstar Barrett is the key man.

“It would be amazing to win the final. It’s been a good year so far,” said Parkes.

“No matter where you are or what competition you’re playing in, to win silverware is awesome. It would be nice to cap it off with a win against a Suntory side who have been going well. I’m sure it will be a good game.

“Beauden is a bit younger than me. I played against him in New Zealand and played with him at the Hurricanes too. He was called ‘The Golden One’ there or ‘GO’ for short. I think he might even have been called it at school. The boys at the Hurricanes certainly called him ‘GO’!

“He’s an exceptional player and any team he plays in does extremely well.

“He’s a big threat and we know exactly the threat he brings. Suntory are very similar to us at Panasonic and also have 11 or 12 players in the Japan squad.

“They’ve got good players across the board so we can’t worry about Barrett too much because if we only worry about him, somebody else will hurt us.

“I think it will be a good match-up and an exciting game.”

Parkes has had a fine first season in Japan even though the tournament, like all sport across the world, has been affected by the Covid-19 pandemic.

Playing in the same team as 2017 British & Irish Lion and 45-cap England lock Kruis has helped and the pair watched the Six Nations together.

He also particularly enjoyed their 40-24 win over England. Kruis, unsurprisingly, did not.

Parkes said: “I got George over for the England game so it was quite nice to watch that with him!

“It was quite funny really. We knew the result before and even before he got over here, it was nice for me to make him a cup of tea and just say ‘Come on then, let’s watch this game!’

“I got stuck into him! At every game I’ve played in Japan I have seen a Welsh jersey. I haven’t seen an English journey at any game yet so I’ve been winding George up about that!

“I don’t know if it’s annoying George, but it’s good to see the Japanese people still supporting Wales after the World Cup.

“I watched all the Wales games in the Six Nations except the Italy one. I watched the French one and tried not to see the score beforehand. We didn’t manage to do it, but even though we knew the result, both my wife Suzy and I were so nervous for the last few minutes.

“We knew what had happened, but it was gut-wrenching to watch it. The boys played so well in the tournament and scored some good tries. They deserved to win the Championship and it was just a shame they didn’t manage to win the Grand Slam.

“I’m happy for Wayne, all the coaching staff and management and the players themselves – they all played extremely well. They got some good results which has been rewarded with a good contingent of them going to the Lions as well.”

If these tries are anything to go by, the Top League Final on Saturday should be a must watch 🔥

Parkes won the Six Nations with Wales in 2019, scored against the Wallabies in the 2019 Rugby World Cup, and went on to play in a semi-final against South Africa.

But he insisted: “Playing for Wales was a huge honour, but there isn’t any regret.

“Looking back I probably didn’t take my opportunities as well as I could have playing Super Rugby, and hindsight is a wonderful thing. But I definitely don’t have any regrets.

“I loved every minute in the northern hemisphere and I wouldn’t change any of that.”