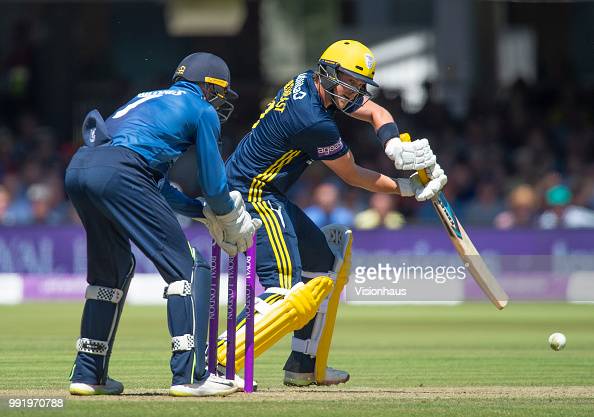 New Glamorgan signing Sam Northeast believes he can help deliver more success to the Welsh county after joining from Hampshire.

Northeast, who joins from Hampshire, previously Kent, is one of the most consistent and experienced batsmen in the county circuit.

In 2005 he made his Kent second XI debut against Durham and scored 96, and was still playing for England Under-15s.

After being part of England’s Under-19 World Cup squad in 2008, he continued with Kent until breaking into the first XI during the backend of 2010.

He secured his spot in 2010 despite struggling in the County Championship, scoring 688 runs at 24.57, by the following year he was a popular member of their squad.

In 2017, Northeast moved to Hampshire after Kent demanded a contract signing to secure his captaincy role.

The following year, Sam Billings managed to get Kent back into Division One but Northeast was a key part of Hampshire’s One-Day Cup victory that year and his run-scoring the following season saw him earn England Lions honours, on their trip to Australia.

The middle-order batsman is looking forward to his journey with the Welsh county.

He said: “I’m extremely excited for the challenge ahead at Glamorgan.

“Next year is the perfect time to build on the Royal London Cup success the club achieved this summer.

“I still have a lot of ambition in the game and I believe Glamorgan share that with me.

“Speaking to Mark Wallace and Matt Maynard, I knew this was the right place for me to commit my future to.

“I am really looking forward to the next few years and the success we can have on the cricket pitch.”

Glamorgan’s Director of cricket, Mark Wallace, added: “Sam is one of the very best players in the county game and when we found out he was available we did everything we could to bring him to Wales.

“Signing Sam is fantastic news for everyone associated the club and to attract a player of his quality is a good sign of the direction the club is heading in.

“He has a terrific record across all three formats and his versatility means he can bat in a number of different positions, while his experience will bring a lot to the changing room and help develop our younger players.”

With Andy Gorvin and Tegid Phillips signing contracts last week, it looks like Glamorgan want to build on their Royal London One-Day Cup victory to next season.