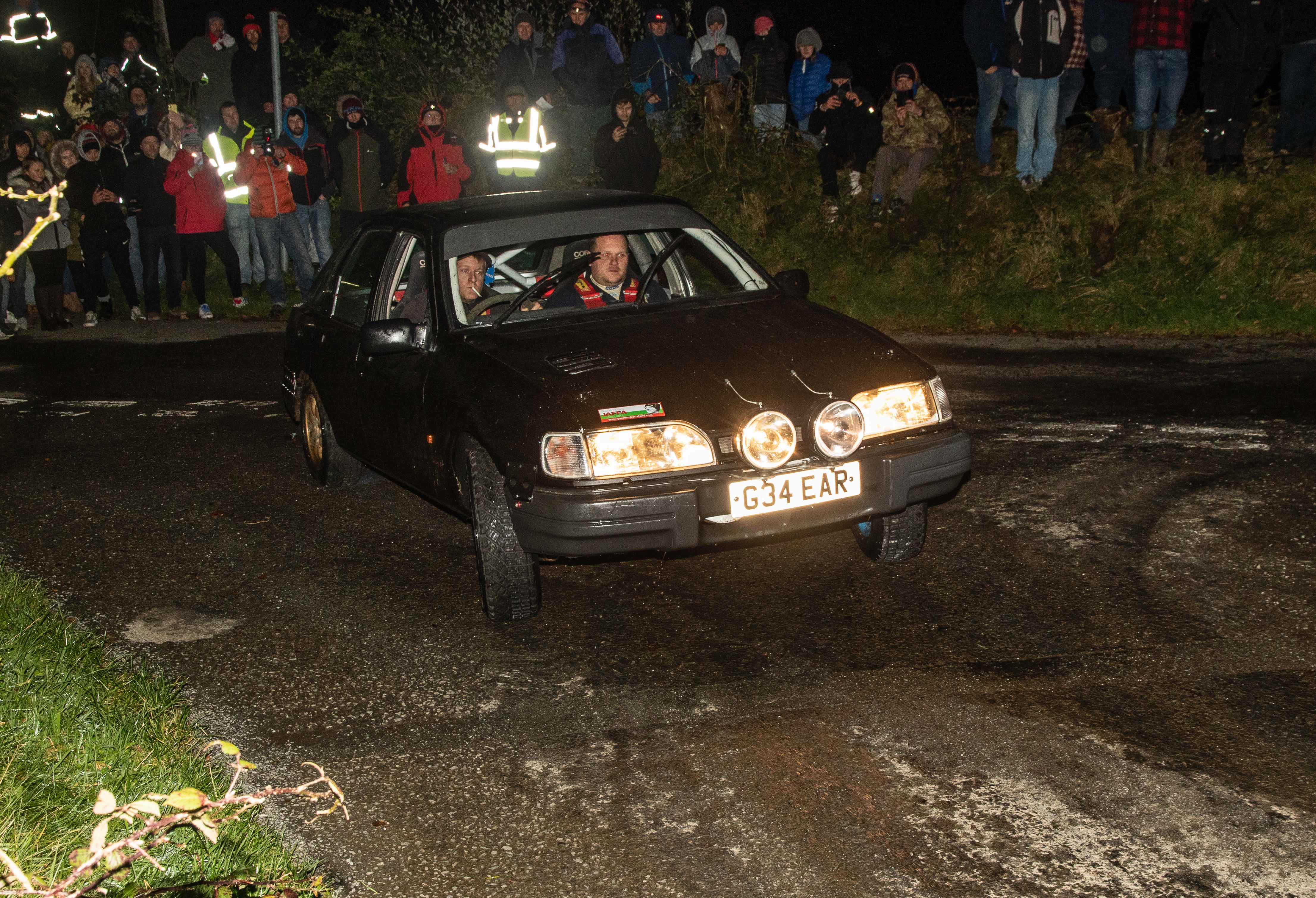 Chris Hand used a most unlikely road rally car, a large 29-year old five-door Ford Sierra LX, to win one of Wales’ biggest and most famous night events at the weekend, the Cilwendeg Rally.

Co-driven by Dai Roberts (who is enjoying a fantastic season as both a driver and navigator), the Cardigan driver mastered the 100 mile route in the lanes around Newcastle Emlyn, many sections of which were treacherously wet and slippery after recent torrential rain.

While Hand in car number five made a good start, the top three seeds had a shocker. Top seeds Kevin Davies/Dale Bowen (Ford Escort) picked up an early five minute penalty for missing a code board and, after losing more time with a puncture, last year’s winners eventually finished in 17th place.

Daniel Jones/Gerwyn Barry suffered an early bath when their number two seeded Escort cut out after a jump and wouldn’t restart, while number three seeds Andy Davies/Michael Gilbey stopped with clutch issues in their Subaru Impreza.

A battle between the west Wales hedgerows between Hand/Roberts and Gethin Morgan/Max Freeman (Ford Escort) raged for the rest of the night – with the latter leading by five seconds at around mid-distance.

Crews were pushing hard, with Andrew Dawe/Andrew Lowe putting their Nissan Sunny sunny-side up and even Hand/Roberts spinning their Sierra and getting it temporarily wedged between the hedges.

One of the stars of the event was teenager Ioan Lloyd. The son of three time Cilwendeg Rally winner Gareth Lloyd had only passed his driving test the day before the event, but at half distance he was 16th overall and leading the Semi-Experts/Novices category. Unfortunately, he and co-driver Dylan Evans lost four minutes when his Escort drowned out in a ford, but he eventually got going again and came home third in class and 32nd overall.

“Ever since I can remember, the Cilwendeg was the rally that I really wanted to do – and passing my driving test thirty-six hours before the start added to the excitement,” said Lloyd. “It was my first ever rally in a Mk2 Escort, my first night event and it is definitely the best rally I have ever done.”