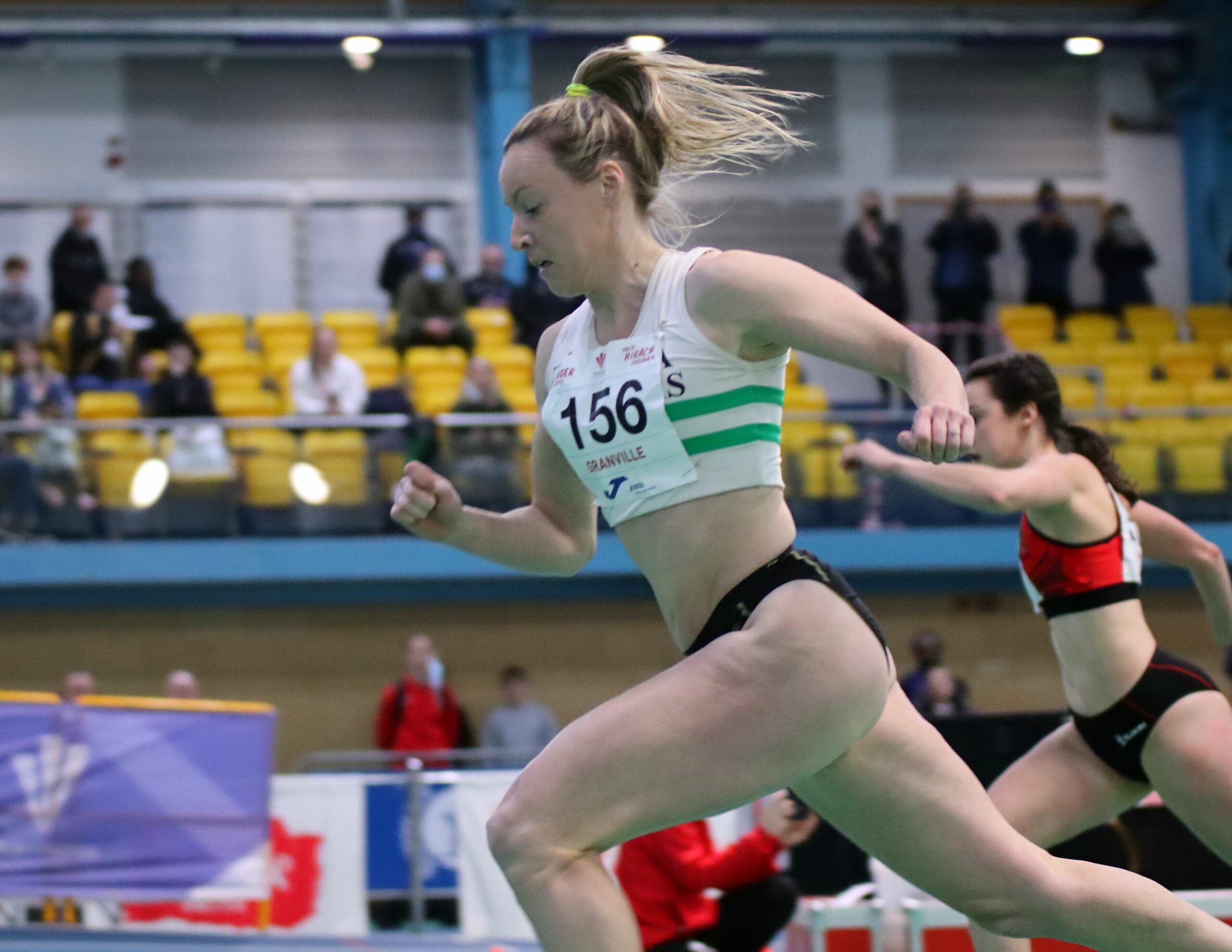 Welsh women’s sprinting is hitting top gear at just the right time with a busy six months of championship sprinting ahead.

The first day of the Welsh Indoor Championships in Cardiff saw the speedsters leading the way on a thrilling afternoon of athletics.

Fittingly the final race of the day was decided by a photo finish as Hannah Brier edged out Mica Moore by just 0.02 of a second in the 60m.

The Glasgow 2012 Commonwealth Games 4×100 relay team-mates are both bidding for places at this year’s games in Birmingham.

While new Welsh Champion Briar is also eyeing up a place at March’s World Indoor Championships in Belgrade.

The Swansea Harrier followed up her blistering time of 7.34 at last weekend’s Non Thomas Open with 7.42 to claim the Welsh Indoor 60m title at the same National Indoor Athletics Centre venue.

“We came to do a job and obviously, winning the champs, I’m really happy with it,” said Brier.

“I had a really good run last week. I ran a 7.34, which is my second fastest time ever and 400 hundredths away from the World Indoor qualifying time. So, I think there’s a lot more to come there.

“It’s just about getting it right on the day, or putting the right race together. But I’m really excited for the season.”

Asked about the prospect of representing Great Britain at the World Indoor Championships, Brier who has suffered a series of injuries over the past few years, said: “I’d absolutely love it.

“I’ve done so well this year, anyway, just coming back from the last five years where I’ve been really struggling with injury and mentally as well.

“Pushing those times for me is big. But I’d love to get that qualifier and hopefully go.”

Brier is also targeting a place at her second Commonwealths in the summer.

“That’s essentially what we’re aiming for, it’s what we’re training for, to get that qualifying time.

“I’m really looking forward to trying to get it. It’s just they’re really, really tough times. But that’s what we’re aiming for.

“I got quite close to the individual time last year. But it would be amazing if we also get a relay team there, too. There’s me and Mica, we’re pushing PBs and these girls are really good in Wales at the moment.

“We just need to get some opportunities together to get that time but I’m sure we will.”

Second placed Moore, of Birchfield Harriers, followed up last weekend’s personal best of 7.48 in Manchester, by clocking a new fastest time of 7.44 to confirm she’s in the form of her life.

Another Commonwealth Games sprint hopeful, Caryl Granville, produced a brilliant run to win 60m hurdles gold in 8.46 – just 0.01 of a second outside her personal best.

The performance was even more remarkable considering the Swansea Harrier suffered a serious illness in September of last year.

The 2016 Commonwealth Games 100m and 400m competitor is no stranger to fighting back from major health setbacks.

In 2020 she suffered several deep vein thrombosis in her leg, which threatened to end her career.

Granville said: “I had a DVT in July 2020 and then last September I had a pulmonary embolism,  so I had lots of clots on the left side my lung.

Caryl Glanville Proves She Is Over Injury Hurdles In Time For British Championships https://t.co/dQgg5jZtHQ pic.twitter.com/GefUzERWBj

“I had races planned that month but, obviously, I had to stop.

“I wasn’t allowed to train, go for long walks or anything like that for six weeks. When I came back, we started really slowly because it was really serious.

“It’s only about four months ago that it happened. So, to actually be able to win and compete at the same level I was before, I’m really happy.”

Things didn’t go all Granville’s way on Saturday as she stepped off the track after a collision in the 400m flat heats, but bounced back in style to take the 60m hurdles.

Now she hopes for a return to last season’s form and go that one step further to achieve the qualifying time for Birmingham.

“Last year, I kept running just short of the qualifying mark, so I need an extra point one to qualify.

“But training is going exceptionally well. I nearly ran a PB today, so I’m getting into shape.”

There were also a number of PBs in the field events – particularly the men’s shot put.

“I’ve got a new coach, Ryan Spencer-Jones, who’s been a massive help and  I feel like I’m going to throw further this season than ever.

“I want to try and get close to that 18-metre mark, because I got 17.45 last year, and try and get the Commonwealth Games standard.

“That’s the main goal. I’ve just got to try and get bigger, stronger and faster.

“I’d like to get to Birmingham, but if not, then the next one. Hopefully, I will be in prime condition for that, especially with Ryan’s guidance.”

The 2012 and 2016 Commonwealth Games decathlete enjoyed a medal-laden day as he claimed the Welsh title in the 60m hurdles and bronze in the pole vault behind champion Thomas Walley, of Wrexham, and silver medallist William Trott, of Swansea Harriers.

Mathews said of his hectic schedule, which at one point saw him swapping the pole vault run,way for the hurdles track and back again, “The programme wasn’t ideal for the three events but the officials were accommodating which was really nice.

“I didn’t get the heights and the times I wanted in the pole vault and the hurdles, but they were decent performances what with going back and forth.

Looking further ahead, Mathews added: “The goal has always been an outside chance of going to the Commonwealths again.

“Like always, I’ve struggled with injuries and haven’t had a great lead up, but I’m putting together some good performances again – although decathlon is another seven events on top of what I’ve done today!

“But, hopefully, like the last couple of Games, I come into form right before the qualifying and if I make my third Game, it’ll be great.

“I didn’t want to qualify at the death a third time in a row, but if it happens again I’m sure I’ll look back at it with fond memories.

“It keeps things very interesting! It’s not particularly enjoyable in the build up, but if it works out that way, it is quite nice!”

There were Commonwealth Games hopefuls galore on the podiums with Newport’s Remi Adebiyi winning the men’s 1500m in a time of 3:50.17 ahead of Oliver Barbaresi, of Thames Valley Harriers and Carmarthen’s Ben Thomas.

Adebiyi said: “The Commonwealth Games would be a nice target to aim for because I’m currently one second off the standard. My PB is 3.40 and I need 3.39.

The women’s 1500m was won by Kate Seary, who has ambitions of making it to Birmingham in the 3,000m steeplechase.

The Cardiff athlete clocked 4:31.90 as she claimed the Welsh title ahead of silver medallist Lauren Cooper, who has her own steeplechase hopes for Birmingham.

Elsewhere, the men’s 60m saw Cardiff’s Sam Gordon clock the fastest time of the day – 6.80 in the heats – but did not start the final.

Gold went to clubmate Dewi Hammond, who produced an impressive run to register 6.81 ahead of silver medallist Zach Price of Menai Track and Field and Swansea Harrier Thomas Payne.

The women’s 400m saw an indoor personal best of 55.56 for gold medal winner Sian Harry, of Belgrave Harriers, while the men’s event was won in fine style by Reece Middleton, of Coventry Godiva, in 50.07.

In the field, Jodi Beynon, of Swansea, took the women’s shot put title with a best distance of 11.05m, while the triple jump saw the men’s title won by Maldwyn’s Ryan Edwards with Beca Roberts, of Carmarthen Harriers, claiming the women’s Welsh title.

The event also featured the Welsh Under-15 championships which produced some outstanding performances.

Leading the way were Swansea Harrier Libby Hale, who clocked a new Welsh Indoor Under-15 record of 4:39.62 in the 1500m and Cardiff Archer Nel Desir who set a new age group and championships best time of 7.68 in the 60m.

A full round up of the day’s results are available on the Open Track website.