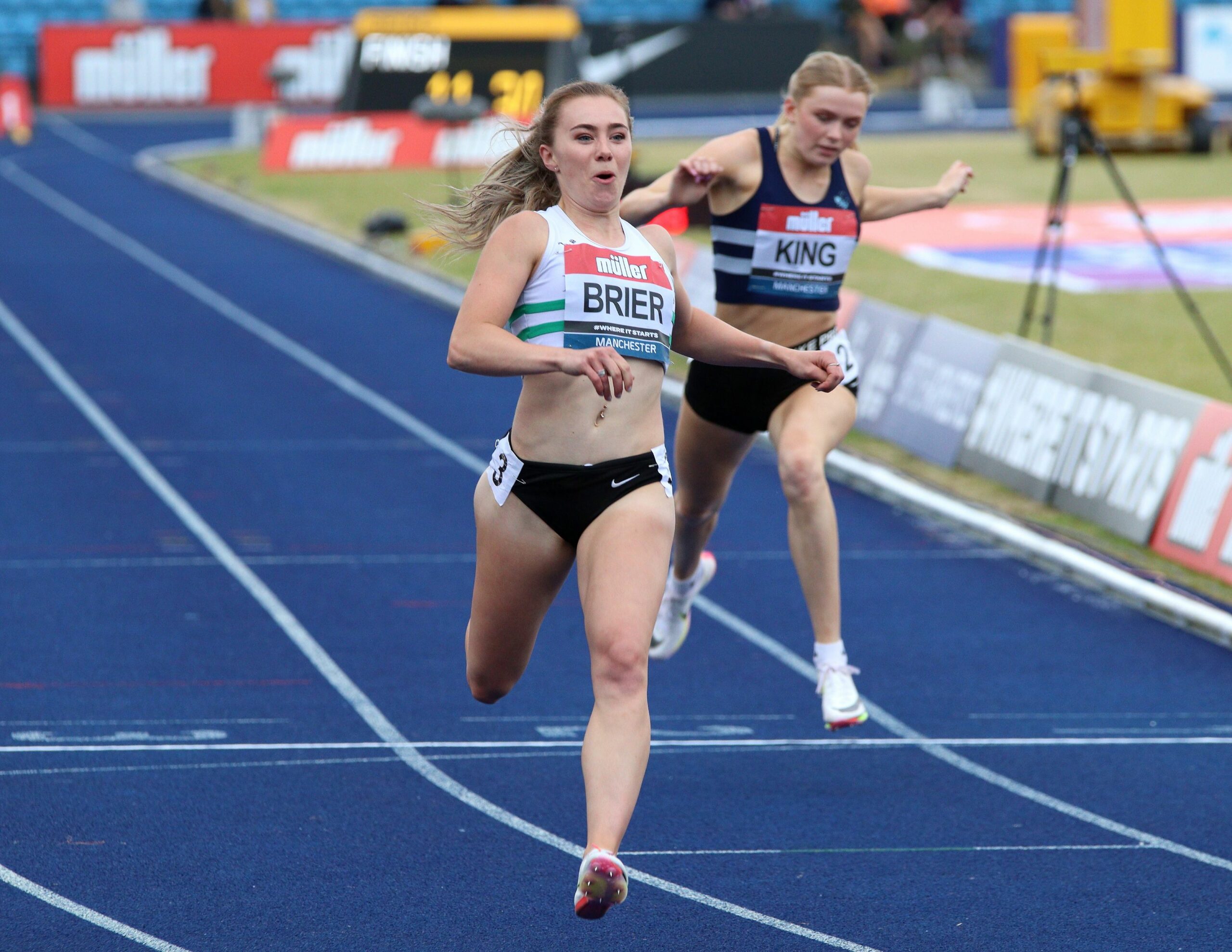 The Swansea Harrier had previously jointly held the Welsh record of 11.39 with Sallyane Short and Elaine O’Neill.

But the Manchester Regional Arena track saw Brier step out on her own in Welsh athletics’ sprinting history as she won her first round heat in a new national best time of 11.33.

Brier, who will represent Wales at this summer’s Commonwealth Games in Birmingham, said afterwards: “My coach (Matt Elias) said run relaxed and trust yourself, but I am not too good at doing that!

“So, I am pleased to have done that time (the Welsh record) today and feeling controlled. ”

Brier said she took inspiration from watching the likes of Olympic finalist Daryll Neita and World 200m champion Dina Asher-Smith winning the heats before hers.

“I have put pressure on myself this year but it is inspirational running with these other girls and putting myself in the mix with them.

“I just watched the previous heat with Dina and she was also in lane three so I thought just watch what she does!”

Brier will once again be in lane three for Saturday’s semi-final which also features Asher-Smith, the reigning UK 100m champion.

It was an excellent night all round for the Brier family as Hannah’s younger brother Joe qualified for Saturday’s 400m final by comfortably winning his heat.

The Tokyo Olympian cruised into Saturday’s final winning by more than half a second ahead of City of Sheffield’s Ben Higgins in 46.49.

Brier was delighted to safely reach the final and said: “I just needed to win the race and ensure I qualify.  I had a good run.

“I need to get through the rounds – previously I have DQ’d in the heats or messed up so I am in shape and really want to progress this year.”

It was a good night for Welsh sprinters as Cardiff duo Jeremiah Azu and Sam Gordon reached Saturday’s 100m semi-finals of the championships, which also double up as the Great Britain trials for next month’s World Athletics Championships in Oregon.

Azu, who won his heat in a season’s best equalling time of 10.18, said afterwards: “I got to 50m and could feel myself in the lead so took it easy for 20m then shut it down. It feels good to get out there.

“I learnt the hard way at the indoors that I need to pace myself in these championships with the rounds and so on.

“I am going to be sure to race smart this weekend,” added Azu who is looking to book a place at the World Championships as well as his spot with Team Wales at the Commonwealth Games.

Gordon, who also has his eyes on a GB vest this summer, qualified for the semis by finishing third in his heat in a time of 10.38.

The Poole AC athlete is also chasing a place at the World Championships.

“My last few races have gone really well and now it’s all about getting that top two tomorrow and get on that World Champs team, which is the aim,” said Courtney-Bryant.

“I’m very excited and it’s always good to race and I think it will be a great 1500m race tomorrow, so I’m looking forward to it.”

Heyward, who, like Courtney-Bryant, is looking to make it to Oregon as well as Birmingham, eased into the final finishing second behind Josh Kerr in 3:43.60.

Full results from the first day’s action can be found on the British Athletics website.