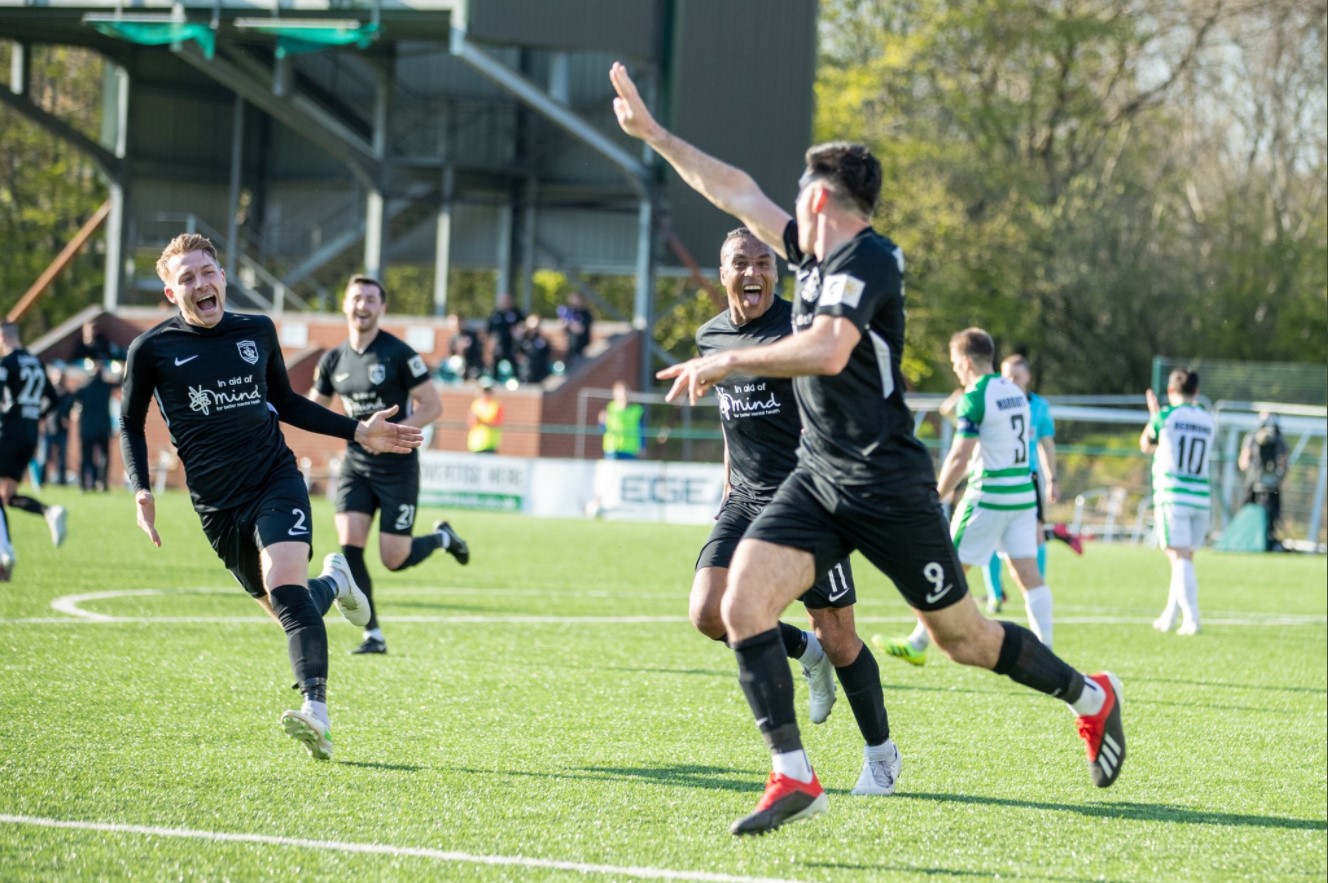 Connah's Quay celebrate during their win at The New Saints. Pic: NCM Media.

An inspired performance from Michael Wilde helped Connah’s Quay overcome The New Saints and move three points clear at the top of the JD Cymru Premier.

Wilde’s first-half hat-trick left The New Saints stunned with Anthony Limbrick’s side unable to recover as they conceded ground in what is proving to be an enthralling title race.

Both teams started the day level on points with Limbrick’s side yet to concede a goal in his four victories since being appointed as head coach.

That honeymoon period is now well and truly over however as Wilde repeatedly exposed Saints’ defensive frailties to help his side climb back top of the table. The scoreline and manner of the performance will also give the Nomads a huge psychological boost for the final run in.

The two sides play midweek before facing each other again next Saturday at the Deeside Stadium and Limbrick will have plenty to ponder before then.

Connah’s Quay’s aerial prowess is no secret yet the heart of The New Saints defence looked hapless in their attempts to marginalise the threat of Wilde.

Blane Hudson was caught completely unaware as Wilde breezed past him at the far-post to head in Declan Poole’s flighted cross, giving the visitors an early advantage, in what was the Nomads’ first foray forward on seven-minutes.

Saints had enjoyed more of the ball but had little to show for their efforts until Luis Robles – starting ahead of both Adam Roscrow and Greg Draper as The New Saints’ most advanced attacker – was denied at point-blank by Nomads keeper Oliver Byrne.

Ryan Brobbel, the host’s main creative outlet was well-contained for much of the game but on the few occasions he was left unattended, the playmaker looked to punish the Nomads defence.

It was Brobbel who briefly fired The New Saints level in the 24th-minute. His quick footwork inside the box allowed him to work himself onto his right with a shooting opportunity that he finished in style, wrapping the ball around into the bottom-left corner.

If Limbrick was hoping that Brobbel’s class would galvanise his side, he would quickly be left disappointed when Wilde struck again six-minutes later.

Wilde was again the quickest to react in his duel with Hudson as he converted Danny Davies’ headed pass across goal, following a delightful pass out to the left flank from Kris Owen.

On the stroke of half-time, The New Saints defence were once again found wanting as Wilde put them to the sword for a third time to head in a Craig Disney cross.

Any hopes Limbrick had of his side staging a comeback were quickly extinguished when Chris Marriot headed a route on ball backwards towards his own goal, allowing Jamie Insall to break free and slip the ball past Paul Harrison.

The Saints for all their quality amongst their squad were unable to muster a fightback and even with Roscrow and Draper thrown on in quick succession to arrest the decline, they offered little for their front two to feed on.

Even when gifted the opportunity to reduce the deficit from the penalty spot, Draper was denied by Byrne, who performed a double save to compound The New Saints frustrations.

CYMRU PREMIER ROUNDUP
Lassana Mendes scored the only goal of the game as Bala Town took another step towards securing European football as Barry Town’s winless streak was extended to four games. .

Barry fall to fifth in the table, two points behind Penybont, after Rhys Griffiths’ side won 2-0 at home to Caernarfon Town. Penybont led from the 34th-minute through Kostya Georgievsky before Nathan Wood sealed the win in added time.

A 5-0 win over Cefn Druids saw Newtown climb top of the Play-Off Conference on goal difference after Haverfordwest were held to a goalless draw at home by Flint Town.

Shane Sutton and Jordan Evans gave Newtown a 2-0 lead at the break, before Evans added a second with Nick Rushton and Jamie Davies also getting on the scoresheet in the second-half.

Aberystwyth and Cardiff Met drew 1-1 on Friday night after Ollie Hulbert rescued a point for the Archers in added time to cancel out Owain Jones’ strike.