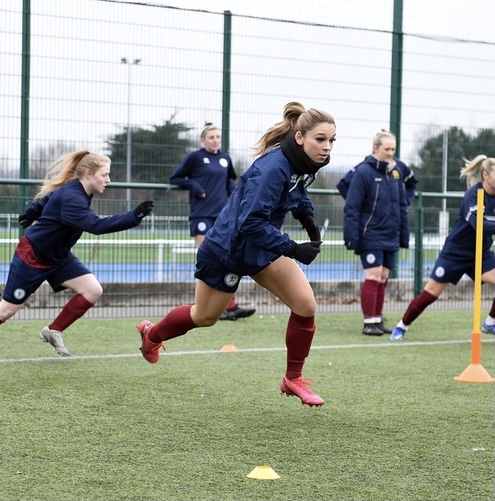 Welsh international rugby star Sam Davies has had plenty of dramatic moments on live TV – but now it’s the turn of his partner, Elianna Chavez.

Dragons No.10 Davies will be among those tuning in this weekend for the start of the Genero Adran Premier League, when interest and hype around women’s football has never been higher.

The success of this summer’s Euro 2022 tournament, hosts England’s triumph in the final, plus Wales’ gathering momentum towards a possible first World Cup finals qualification, has all combined to focus attention on the sport.

The revamping of the top tier of the domestic game in Wales has had a year to bed in and the opening match of the Genero Adran Premier League – between Swansea City and Chavez’s Cardiff Met – will be shown live on S4C on Sunday evening.

Adding to the spice is the fact that Met beat the Swans last season in the Adran Trophy on their way to lifting the Cup.

Since arriving in Wales from Texas, 23-year-old Chavez has already enjoyed some great days with Cardiff Met and the striker has also seen first-hand the change in mindset around the women’s game and those who follow it.

“It is all about timing and at the moment the women’s game is starting to be broadcast everywhere,” she says.

“It is just great to see young girls aspire to play football.”

Every successful league needs an intense rivalry and domestic women’s football in Wales now has it between the two best teams – one from the capital and one from the second city.

It’s a power struggle that has tilted one way and then the other. Between them, the pair have won the title for the last nine seasons – five titles to the Met, four to the Swans.

Chavez – who came to Cardiff Met to study international business management – says: “Winning the Cup was obviously the highlight from last year, it was an amazing moment.

“It was the first big Cup win I have ever been a part of, so that was amazing. It was tough to lose the League and the Welsh Cup, but I think we played really well last year.

“Last year’s performances have really motivated us into this year’s pre-season and we are looking forward to getting back in action.

“I think what is different this year is that we have a really dynamic team, and the squad is really versatile. Every player is capable of playing anywhere compared to previous seasons. We have a lot of depth in each position.”

The question is, can that depth match Swansea’s at the Swansea.com Stadium on opening day.

The Swans were champions last season, but were made aware of the rising standards across Europe last month when they suffered heavy defeats in the early stages of their Women’s Champions League campaign.

“Swansea are a great team, they won the league last year and have been playing to qualify for the Champions League this summer, so it will be a big challenge,” adds Chavez.

“Going up against them in the first game, there will be a lot of passion and a lot of fire. Last season we were able to compete well, but I think we will have a lot more to give and we can take a lot of confidence from last season.”

Chavez played college football at St Edward’s University, in Austin, Texas and admits she was inspired by the USA women’s team that ruled the roost at the 2008 and 2012 Olympics and went on to win the most recent two World Cups.

“There was a time a few years ago when the US seemed to be miles ahead of women’s football in the UK, but now the UK is definitely closing that gap and it has been great to see the game in Wales growing,” adds the Met forward.

Last season, she combined football with her studies. But now she is working full-time for a software company and admits: “It is a tough balance and there is a lot on your plate.

“It is all about balance, but football gives me an escape and it is a great release for the stress that maybe work brings along. I can’t imagine not playing it.”

The best images as Swansea City Ladies complete their preparations ahead of the opening @AdranLeagues match against Cardiff Met Women on Sunday, September 4 (https://t.co/q7Og3Yk4zf kick-off).https://t.co/wXc6AVcUUl@SwansOfficial | @AMROCHEATING

At least her partner, Dragons playmaker Davies – capped eight times by Wales – can offer a helping hand and understanding.

“He comes to almost every match, and I try and get to all of his.

“I had no idea how things would be over here, but I was pleasantly surprised with the standard of football. I would say it’s as high, if not higher than where I was.

“Welsh football has a lot to offer.”

Live football as Swansea City and Cardiff Met meet on the opening weekend of the Genero Adran Premier season.