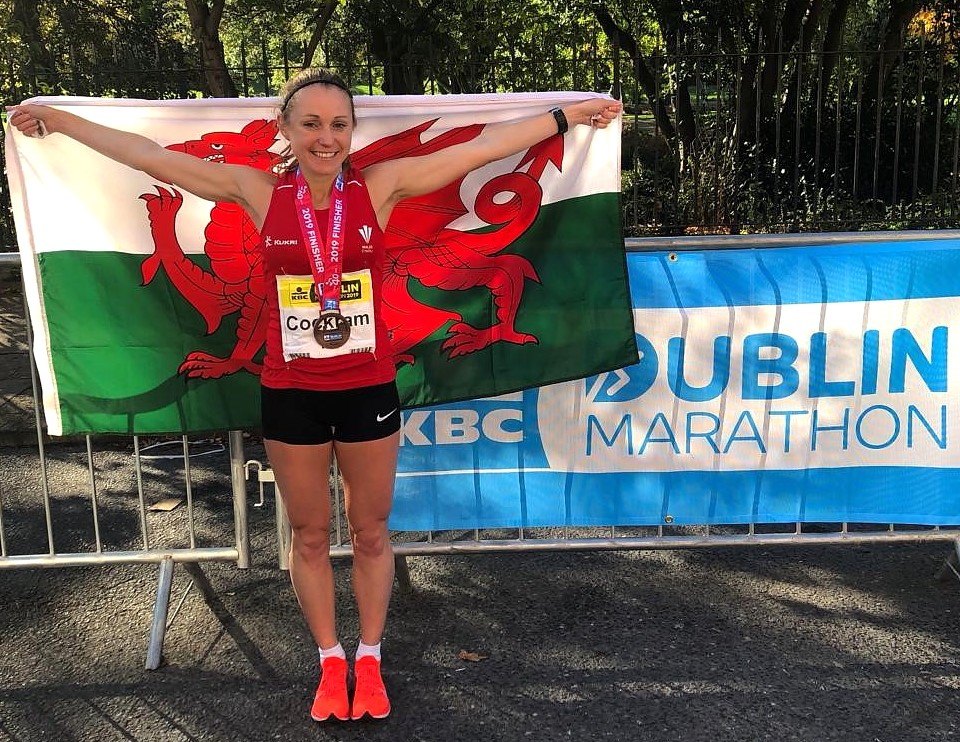 Natasha Cockram after finishing fifth at the Dublin Marathon.

Cardiff’s Tooby twins, who dominated Welsh women’s distance running in the 1980s, are gradually being written out of the nation’s record books by Wales’ current crop of outstanding endurance athletes.

Breaking Susan Tooby’s marathon record of 2:31.33, set while finishing 12th at the Seoul Olympics of 1988, has given Cockram extra belief she can emulate her countrywoman’s achievement of competing on the biggest stage of all.

Cockram is closing in on the 2:29.30 qualifying time for next summer’s Tokyo Olympics having slashed almost three-and-a-half minutes off her previous best to set the new Welsh record of 2:30.55 in Dublin on Sunday.

Cockram said of breaking Tooby’s record: “It means a lot, especially the fact that she set it at the Olympics. It makes it more special, along with the fact that it has stood for so long.

“There have been people who have attempted to break it, it wasn’t an easy record to break, it’s stood for a long time.

“It makes the Olympics seem more of a realistic goal. It’s a surreal feeling that it could be on the cards. Especially as Tokyo 2020 next year seems so soon, but it does seem realistic now.

“I just want to get back into training ready for the next one now, it’s made me even more determined to go for the Olympic standard. I was right on the pace until the last two miles and then just fell off.

“I’m going out to Houston in January to give it another shot and hopefully get the time there, if not, London will be the final chance.

The Mickey Morris Racing Team athlete produced a brilliant performance in the Irish capital to finish fifth, splitting a clutch of top class African opponents and clocking the third fastest time by a British athlete this year.

However, Cockram, who has slashed more than 14 minutes off her PB in little over 18 months, believes there is room for improvement and the Olympic standard is within reach.

The Cwmbran civil servant said: “I think it is in me because Dublin didn’t go completely smoothly, so as long as I get a good build up now and stay healthy and the race does go smoothly, then I think I can get it.

“The drinks stations were a major problem. I didn’t pick up any of my drinks other than the one, partly because I was blocked off by the Kenyan and Ethiopian runners and the fact that they were surging and working against me.

“They dropped a 5:06 mile and then a 6:10, so I think if it wasn’t for those surges then that could potentially be another 30 seconds.

“It was hard, it would have been nice for another European runner to be in the mix with me. But it was a big learning curve.”

Her performance was all the more remarkable considering the 26-year-old was kicked by a horse just a few days before the race, leaving a huge bruise on her right thigh.

Cockram, who relaxes away from running by riding, had gone to check on her horse on the Wednesday before the race, only to be kicked by another horse.

“On Wednesday night I was checking my horse and I got kicked by someone else’s horse. I went into panic mode thinking I wasn’t even going to get on the plane to go.

“I think it affected me more mentally than anything because on Wednesday, Thursday and even Friday I was panicking, my physio was away on annual leave, but I managed to get in to see a physio I had never seen before, but I’m really fortunate that he did a really good job and put everything right.

“My hips were lightly out of alignment from the impact of the kick, but the physio got me back, made me more confident, so I got on the flight and went.

“It didn’t really hurt during the race, it went a bit numb at one point, so it could have potentially meant a few seconds here and there.”

Representing Wales at the Leeds Abbey Dash 10k, Arter clocked a superb 31:35 to go top of the all-time list.

The Cardiff AC athlete’s time puts her fifth in Europe for 2019, and fifth on the UK all-time list behind Wendy Sly and ahead of in-form Laura Weightman’s 31.40 set earlier this year.

The new Welsh record comes just a couple of weeks after Arter won the opening leg of the British Athletics Cross Challenge in Cardiff.

Arter was delighted with her individual performance which also helped Wales to team gold at the Yorkshire event.

“It’s always a fast start at Leeds,” she said. “I tucked in amongst the leading women and some of the guys for the first 3k, but by 5k I felt it slowing and I decided to push on.

“Coming back into town I was looking at the watch thinking I was on for a low 32min time, maybe just under, but it wasn’t until I saw the clock in the last 100m that I realised how quick I’d run!

Arter’s immediate goal is the European Cross Country Championships trials in Liverpool next month, where she hopes to gain a place on the Great Britain team which will travel to Lisbon in December.

The Chris Jones coached athlete won at Liverpool last year to seal her place on the GB team that competed in Tilburg, Holland.

Last weekend’s marathon and 10k best times are the latest in a flurry of brilliant Welsh women’s endurance performances that have been re-writing the record books.

Welsh national coach Chris Jones said: “I’m delighted for both Natasha and Charlotte, they’re both working so hard to develop themselves as strong, resilient athletes.

“The reward of seeing themselves entering the history books by breaking records is well deserved and shows the support programme we have in place around our senior athletes is working.”