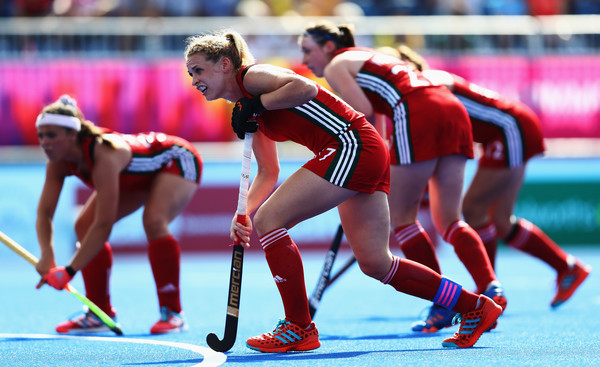 But this weekend she will celebrate a couple of her own making, taking her place in the annals of Welsh sporting history during the three-test series against France in Cardiff being live streamed by S4C.

On Friday, Wilkinson will equal Paul Edwards’ record of 157 appearances for Wales at hockey before setting the new mark of 158 in Saturday’s second game at the National Hockey Centre.

Then she will also become Wales’ most-capped sportsperson, certainly in team sports, having already surpassed the records of the most capped netballer Helen Weston (111 caps), rugby player Gethin Jenkins (129) and Jess Fishlock who has made 116 appearance  – and counting – for her country in football.

“Paul has held that record for 10 years or something which is an amazing achievement so it will be extra special to beat it on a weekend when other players are celebrating milestones,” said Wilkinson, who will also see team-mates Sian French (97 caps), Jo Westwood (98) and Phoebe Richards (99) join her in the special ‘100 Club’.

“I feel really honoured to do it in Cardiff, in front of a home crowd with family and friends. I feel really proud to have achieved what I have, to have trained hard and played for as long and represent my country more times than anyone else has.

“It’s been quite a long career. It’s been amazing, to have been to so many places and played with so many good players. On Saturday some of the old Welsh players will be down so it will be great to see old team-mates.”

Wilkinson, who made her debut against Ireland in 2004, added: “It’s been a great 14 or 15 years now and it always becomes a bit more special where you start to get nearer the end of your hockey career as you don’t take things for granted.

“When you’re 18 or 19 you don’t think about these kind of things, but the older you get you feel more privileged.

“I don’t even know how the 15 years have gone by. I don’t really know how I’ve got to this many caps.

“It’s only the last couple of years that I’ve sat back and kind of reflected on what I’ve achieved with Wales and the places I’ve been.”

The 15-year career has seen the Burton-on-Trent born defender represent her country at three Commonwealth Games, Delhi in 2010, Glasgow 2014 and last year on Australia’s Gold Coast.

In Queensland, Head Coach Kevin Johnson’s side memorably stunned India, one of the world’s top teams, beating them for the first time in the opening game of the tournament and her first as skipper having succeeded Abi Welsford.

“There have been so many highlights, but the Commonwealth Games are amazing,” added Wilkinson, who has been in Belgium this week supporting GB’s women.

“Being able to play in a multi-sport competition like that, seeing so many different athletes from all across the world.

“Then to win against India in that first game really as captain. We had been working so hard towards that and all that hard work came to fruition against  them.

“That’s up there as one of the highlights as was the 2010 Games in Delhi as it was a different culture.

“I remember we got a private train to the Taj Mahal and we had a private tour around it with no-one else there. It’s mad really, you are at one of the wonders of the world and you’re there with just a couple of hundred athletes.”

Wilkinson, who started playing hockey at the age of five, has combined her career with the demands of teaching and being Head of Year at Ewell Castle school in Surrey.

“People say you’ve sacrificed a lot but I don’t like that word,” added the 32-year-old. “It’s not a sacrifice.

“It’s about decisions that you make. It is a bit of a strange life-style being on my school fields at 7 o’clock in the morning doing  a running session before work, then gym afterwards.

“It really is a big commitment and we’re not funded athletes. But I wouldn’t have it another way as I have a job, a normal life, but I also get the chance to be an international hockey player travelling the world playing for my country.

“My school is really supportive and it’s brilliant not to have that pressure on you when you go away.”

After the three tests against France, there’s the upcoming FIH Open Series in Valencia and European Championships in Scotland to look forward to this summer.

And the Commonwealth Games in Birmingham is now only three years away, by which time Wilkinson could be heading towards the 200 cap mark! If she carries on playing.

“I have got to the point where I can’t set a target,” she added. “I always say to myself I would love to play until the next Games, then after a hard tournament or training session sometimes I can’t walk or get out of bed properly I’m so stiff.

“Then I think to myself I’m not sure about another three years.

“It really will be just how long the body holds out for, but I also want to still be playing at a really good standard. I don’t ever want to feel I am not contributing to the team so I don’t want to put a time on it. ”

**S4C will be live streaming all three matches from the National Hockey Centre at Cardiff’s Sophia Gardens.

The first test will be played on Friday 31 May, with pushback at 6.00pm, while the second gets underway at 5.00pm the following day, Saturday 1 June. The concluding test takes place at 11.00am on Sunday 2 June.