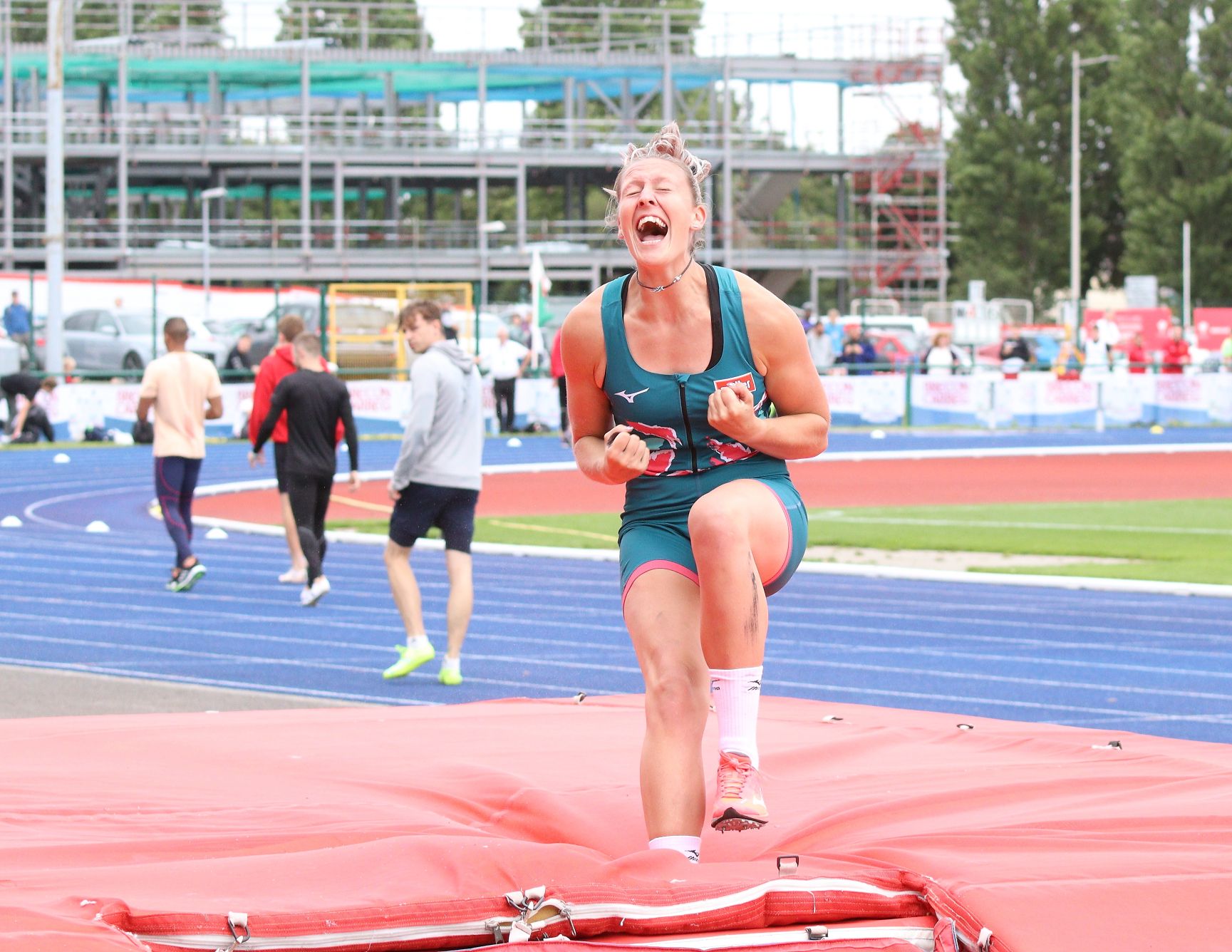 On the day a huge welcome home party for Great Britain’s Olympic heroes was being held in London, Bradshaw was busy competing at the Welsh Athletics Championships in Cardiff.

And the athlete, who spent five years living and training in the Welsh capital, ensured she made it an occasion to remember by breaking her own Welsh all-comers record.

This was no celebratory parade for Bradshaw – not until the serious business of the competition was out of the way, anyway.

The first British pole vaulter to win an Olympic medal was all business from the moment she entered the competition at 4.25m.

Each clearance was celebrated as if she was still competing in Tokyo, especially when she jumped 4:53 to break her own Welsh all-comers record set at the 2015 Welsh Championships and then improved on it to clear 4.60 – all remarkably achieved off her reduced eight step run up.

The height was just 25 centimetres off the 4.85 jump which won her the bronze in Tokyo – achieved off her full competition run up.

After Sunday’s competition, Bradshaw, who is coached by former Welsh international pole vaulter and previous Wales National coach Scott Simpson, explained why she was so keen to compete in Cardiff where she lived for five years and trained at the city’s National Indoor Athletics Centre (NIAC).

“It was really important to come here today,” said Preston-born Bradshaw. “A lot of people seemed surprised that I was still doing it.

“But I was coming down to Cardiff anyway to visit 20 of my really close friends who I have not been able to see in so long because of Covid.

“And for me, I don’t often get to compete in the UK. I might do a couple of Diamond Leagues, but Wales is so special. I lived here for so many years.

“And so many people here have allowed me to be where I am today. So, I thought it was only right to come and almost just jump for fun and have a bit of an exhibition so people can see me and I can see them.”

Asked whether her bronze medal win in Tokyo was partly made in Wales, Bradshaw said: “I definitely think so.

“I had four years of my career in Manchester. And then, actually, the main bulk of my career from 2012 through 2018 was spent in Wales training at NIAC, having treatment by the Welsh physios, and me and my husband bought a house here, which we owned for four or five years.

“So, it’s very special place. And we don’t get to visit that often. Because it’s a little bit far from Loughborough. But yeah, this is definitely like a second home to me.”

Bradshaw was delighted at how well she performed for the appreciative Welsh crowd, especially as her next competition is the Diamond League meeting in Eugene, Oregon this Saturday.

“I jump eight steps in training all the time and it’s kind of fun. I would never do a competition from eight steps, because I pretty much thought my limit was 4.50

“I have two more competitions this season. It’s almost a good stepping stone for them.”

Bradshaw said she hoped competing side-by-side with some of Wales and the UK’s rising pole vaulters and getting the opportunity to chat with them, would help inspire the next generation of competitors.

“I just hope to inspire them a little bit. Pole vault in the UK is not as popular as I would like, but it’s such a fun event.

After the competition, Bradshaw spent well over an hour chatting to fellow competitors, fans and event officials, passing around her Olympic medal and posing for countless selfies.

With Bradshaw taking the overall win, the Welsh title was won by Swansea Harrier Carys Jones with a height of 3.55m. Silver went to Newport Harrier Ellie-Mae Wainwright with 3.35, while Cardiff’s Isabel Thomas won bronze with the same height.

Older athletics fans would also have spotted another British pole vault legend at Sunday’s meeting in the shape of Brian Hooper, who was coaching competitor Jade Ive.

Hooper competed at the Montreal and Moscow Olympic games and won bronze medals at the 1974 and 1978 Commonwealth Games.

The former British Champion went on to further success in the hugely popular Superstars TV programme where he became one of the competition’s most successful athletes as the only European to win the world Superstars title in 1982.