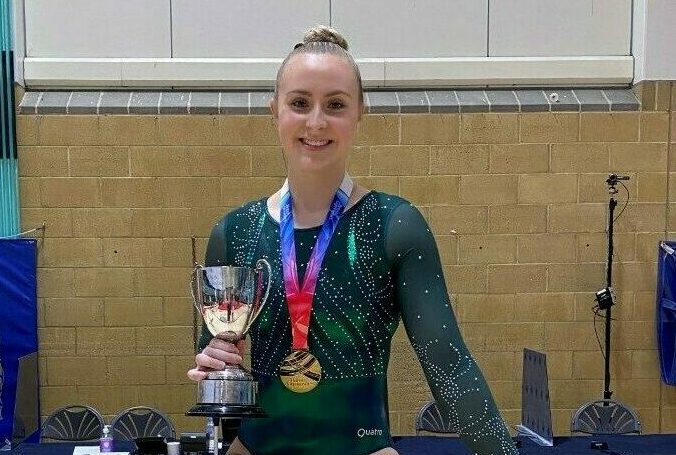 A dozen medals, including a clean sweep in the juniors and seven won by four Commonwealth Games contenders, capped a brilliant 2021 Women’s Artistic British Championships for Welsh gymnasts in Guildford over the weekend.

Holly Jones, a member of Team Wales at the last Games on Australia’s Gold Coast in 2018, has been crowned senior British vault champion for a second time, while three other Birmingham 2022 hopefuls – Jea Maracha, Mali Morgan and Poppy Stickler – also won medals to round off their junior careers in style.

The win on vault also came less than two weeks after winning silver on the same apparatus at the Northern Europeans in Cardiff, which was her first competition back in almost two years.

It sets her up nicely for what promises to be a big year in 2022, when she will be aiming to first secure her place at a second Games – and will then be hoping to go on and better her performance from Gold Coast, where she only narrowly missed out on a medal after finishing fourth on vault.

A dozen medals, including a 🏴󠁧󠁢󠁷󠁬󠁳󠁿 clean sweep in the juniors, capped a brilliant 2021 Women’s Artistic British Championships for our gymnasts at Guildford Spectrum over the weekend.

“I also felt really happy with my floor routine and it was an improvement on the Northern Europeans; disappointed on beam but felt good and confident out there.”

The senior all-around title was won by Ondine Achampong (Aylesbury).

Jones won’t have to wait long to defend her vault title, with both the men’s and women’s artistic British Championships scheduled to be returning to its normal March slot at the M&S Bank Arena in Liverpool in 2022.

Her victory came later on Saturday, after the espoir gymnasts (12-13 years) were first to take to the competition floor earlier in the day, with 12-year-old Jemima Taylor (Clwb Cymru Caerdydd) scoring 12.450 with an elegant routine to take the beam title.

She then took her second win of the day, this time on floor, impressing the judges with her beautiful artistry to be awarded a great score of 12.850.

Taylor, originally from the City of Newport Gymnastics Academy, has been training at Sport Wales National Centre under the guidance of the national coaches since the age of seven.

She also finished fifth in the all-around competition.

The espoir all-around title was won by Tiegan Trafford (Abingdon).

The Welsh dominance continued with victories in all four apparatus finals.

Stickler (originally Capital) won two titles; scoring an average of 13.250 on vault while also impressed the judges for a score of 12.400 on the floor exercise.

Maracha (originally Phoenix GC), who was the espoir all-around champion in 2019, performed a super clean routine to win the bars title, scoring 13.050.

A fantastic weekend for our Women’s Artistic gymnasts at the 2021 British Championships.

Two other Commonwealth Games Long Listers, Mia Evans and Gabriella Williams (both Park Wrekin) were also in action in the junior category over the weekend. Evans’ best result was fifth on vault (12.950) while Williams’ best display was seventh on floor (12.000).

Maracha, Stickler and Morgan, along with Mia Evans and Williams all turn 16 and are set to make their senior bows in 2022 – the year of the Games – but Birmingham comes too soon for Ruby Evans, 14.

Next year’s Artistic British Championships are set to take place from 24-27 March and should also see the return to action of Great Britain’s Tokyo Olympic Games stars.