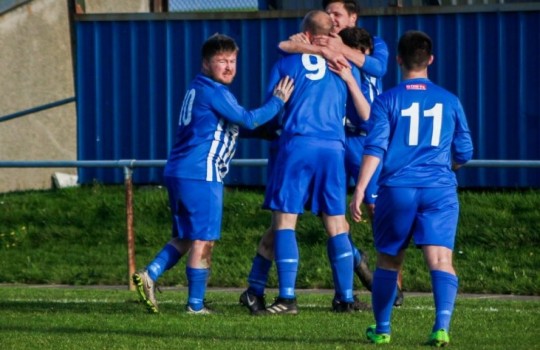 Bangor led 2-0 with half an hour gone, but Holyhead hit back to lead 3-2 and the game went into extra time with the teams locked at 4-4.

Hotspur held their nerve and advanced to the cup final where they will play Alliance leaders Airbus Broughton.

Holyhead were League Cup losing finalists in 2007 and 2009. How they would love to lift the trophy this time.

Their semi-final against Bangor was played in near gale force conditions. All the more credit to the two teams and the

officials for making it such a memorable game.

Bangor City took a 2-0 lead before Hotspur hit back to lead 3-2. The hosts went 4 -2 in front with Littlemore completing his at-trick on 53 minutes before Bangor recovered to make it 4-4 after 90 minutes.

Dan McGuinness produced a stunning 35 yard strike to put Holyhead in front on 102 minutes, leaving goalkeeper Nathan Wolland helpless with the power and quality of his shot.

Tomos Clarke made it 6-4 and then Bangor-born Mel McGuinness joined in the fun when he made a superb run from his own half and slotted the ball comfortably past Welland to make the score 7-4 to Hotspur.

Summer-Jones netted a consolation for Bangor during injury time and Holyhead march on to the final.

Airbus Broughton kept alive their chances of a league and cup double when they won their Alliance Cup semi-final against Porthmadog away 1-0.

Oliver Lanceley scored the only goal of the game after six minutes.

In the Cymru Alliance, Flint Town United moved to within seven points of leaders Airbus Broughton with a 2-0 win against visitors Rhyl.

After a goalless first half Ieuan Hewitt fired the Silkmen ahead on 52 minutes and a Richie Foulkes penalty five minutes later sealed the points.

A goal in each half from Sion Edwards and Iwan Lewis gave Porthmadog the points at home to Huws Gray cup finalists Holyhead Hotspur.

Ruthin Town goalkeeper Ryan Goldston produced a series of superb saves against Buckley Town, but he was beaten after 51 minutes when Luke Blizzard scored. That proved to be the only goal of the match.

Penrhyncoch took a 17th minute lead at Llanrhaeadr YM through Stef Davies, a lead they held until seven minutes into the second half when Joe Vaughan fired YM level.

Llan scored the winning goal when Kham Whitton fired home after 68 minutes and clinched a 2-1 win.

Gresford Athletic and Holywell Town drew 1-1 at Clapper Lane. Steve Lewis fired Holywell ahead from a penalty after 79 minutes before Simon Smith equalised from a free-kick with two minutes left.

Bangor City won 1-0 at Conwy Borough in the Alliance with Sam Jones scoring the only goal after 67 minute.

Conwy had a golden chance to level, but goalkeeper Nathan Wolland pulled off a great save from a Corrig McGonigle penalty.

Prestatyn Town held a 1-0 advantage at the break against visitors Denbigh Town thanks to a Jack Higgins goal.

Denbigh were reduced to 10 men in the second half when Kristian Pierce was sent off for a second bookable offence, but they drew level six minutes from time through a Pat Hinchcliffe free-kick.

Prestatyn’s Dave Hayes had the last word with an injury time winner for his team.

Bangor City will play their second consecutive home fixture away from their usual Nantporth home this weekend.

Their fixture against Ruthin Town will be played at Llandudno’s Maesdu Park on Friday night (8pm).

The switch means Bangor will have played at three different home grounds this season, having played at Nantporth and Conwy Borough’s Y More.

Bangor tweeted: “We would like to thank Llandudno for helping with the fixture and to Ruthin on agreeing.

“We are aware it is not ideal and we are doing everything we possibly can to get back in our own ground as quickly as possible. Apologies for the inconvenience.”