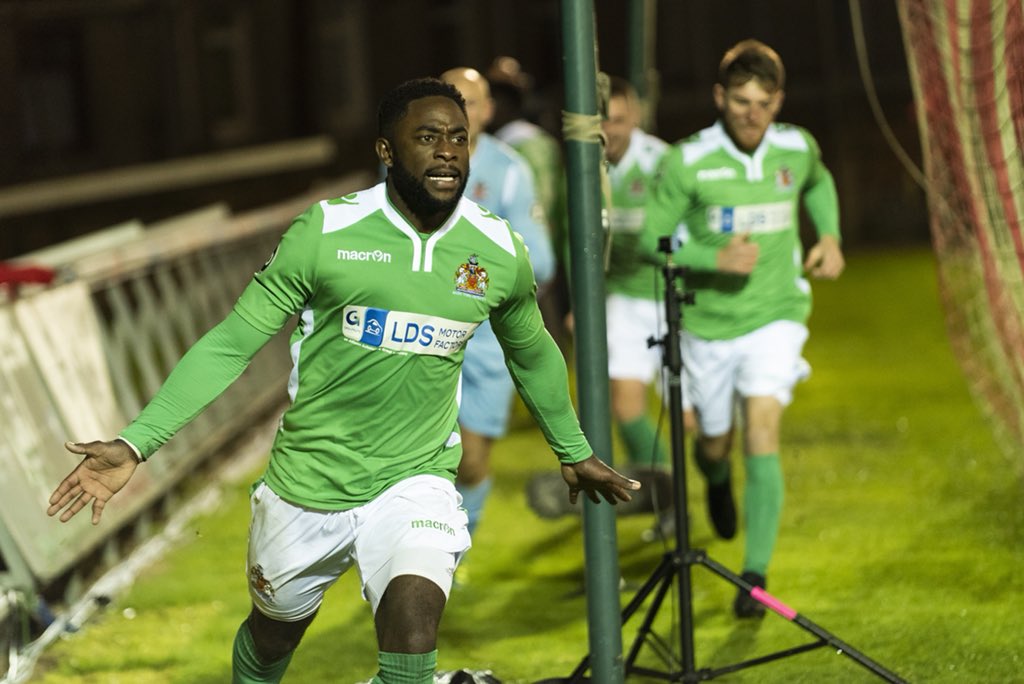 Kayne McLaggon used to climb over a Jenner Park fence to watch Barry Town play European matches – and now he is preparing to play for his home town club in the Europa League.

Barry Town United take on Cliftonville at Leckwith Stadium on Thursday when McLaggon will experience playing European football for the first time.

He was a pupil at Gladstone Primary School and lived close Jenner Park during the 1990s when he would occasionally sneak into the ground.

“I’ve got to be honest, I probably shouldn’t say this, but I remember climbing over the fence to get in to a few European ties back in my younger days as a boy growing up in Barry.

“I probably owe the club some money, to be fair.

“As a kid I lived around the corner from the ground, so I’d walk over and if I couldn’t get in I’d watch the game from behind the fence or try and jump over and get in to see the action.

“I would always do my best to go and watch Barry. I remember them playing against Dynamo Kiev and Aberdeen, a friendly against Manchester United, too.

“This club and European football at Barry has always been a part of me. I could see the ground from where I lived so it means perhaps more to me than most.

“When I signed for Barry I was just hoping I could help bring those days back and I’m proud to have played some part in doing that.

“It’s been an absolute whirlwind in terms of my football career, really.

“I had to wait a bit longer than I would have liked for my Wales C cap, after being injured a year before and not being able to take part. That was so special, but nothing really compares to taking your home town club back into Europe.

“That’s where it all started for me, my first game as a child was watching Barry in Europe and it’s all come full circle now. Playing in Europe for Barry! This is what dreams are made of.

“I’ve never played in European competition before. It’s the first time for most of the squad, but our club has history in Europe and people will be looking at us. We just do the foot all club justice.

“We must give ourselves a chance and try to replicate those famous Barry European nights from the past.”

McLaggon’s big break in football came at Jenner Park when he was playing for Vale of Glamorgan against Swansea in a schools match.

“A player in the Swansea team was on trial with Southampton and they had a scout at Jenner Park for that match,” says McLaggon. “They were watching him and saw something in me. I joined Southampton when I was 16-years-old.”

The Saints were playing in the Championship along with Cardiff City and Swansea City when McLaggon broke into the first team during 2008-09.

“That was the best time of my life, but it didn’t last,” he said. “I scored against Norwich City, but Southampton were relegated and I suffered a bad injury after eight appearances.

“A ruptured Achilles meant I didn’t kick a ball for 12 months and I didn’t come back the same player. It takes time to regain confidence after that type of injury.

“I had been looking forward to playing against Cardiff, but that fixture came just after my injury.”

“The lure of playing for my home club attracted me,” says McLaggon. “I still live round the corner from Jenner Park. My family are able to watch matches. It was the right time for me. Barry Town United FC is the hub of our town.

“I loved playing for Merthyr. That’s a great football club. It’s a football town with good people and good fans. The Martyrs should, though, be playing at a higher level and it would be good to see them progress.”

McLaggon has scored scored 30 goals in 69 appearances for Barry over the last two seasons, finishing as top scorer two each time, and has signed a new long-term contract with the JD Sports Welsh Premier League club.

When he signed for Barry two years ago McLaggon talked to manager Gavin Chesterfield about European football and he says: “When Gavin and I sat down the plan was always to try and get the club back into Europe.

“I’m not sure if we were that positive it would happen in the first two years, but I knew that we would get there eventually because this club has so much history at a European level.

“We were always going to get there at some stage, it was just a case of when. To do it within the two years from when I initially signed for is huge, a real dream come true. It is massive for the town, massive for the club, for the supporters, everyone, it’s just really great.

“What we’ve done this year has completely surpassed what I thought we could do. I’m the biggest supporter and the biggest believer in what we can do as a team, but to be in a title race for as long as we were last season was incredible and to secure Europe, it’s just fantastic.

“Over the years this club has just continued to prove people wrong and hopefully we can go and do it again in Europe now. This is what dreams are made of. I hope it never ends.”

McLaggon was six-years-old when jumped over a fence at Jenner Park to watch Barry’s European tie against Aberdeen. The result was 3-3 with Aberdeen going forward 6-4 on aggregate.

Player-manager Gary Barnett and his team went toe-to-toe with Aberdeen on a rainswept evening. Chris Pike’s aerial power troubled Aberdeen until a knee injury forced him to withdraw at half-time and he set up Barry’s first goal.

The striker’s header was parried by Nicky Walker into the path of Dave O’Gorman, who scored easily. Darren Ryan and Tony Bird were their other scorers.

Tickets for the first leg, on Thursday, June 27(6.30pm kick-off) are now available from Barry Town United club and the Football Association of Wales at £10 (adults), £7 (OAPs) and £5 (children).

The return game is at Cliftonville’s Solitude Stadium on Thursday, July 4 (7.45pm).

The winners of the Barry/Cliftonville tie will play FK Haugesund, who finished fourth in the Norwegian Eliteserien.

Barry played their final warm-up game on Saturday against Ballymena United, slipping to a 2-1 defeat.

Jonathan Hood fired Barry ahead after 17 minutes before Leroy Millar headed in from a Steven McCullough corner after 28 minutes.

Both teams made substitutions at half-time with the home team scoring the winner soon after the break.

Shane McGinty cut the ball back to Ryan Mayse, who fired into the bottom corner of the net.

Both sides had a few key chances during the remainder of the game, but some resolute defending ensured the Sky Blues ran out 2-1 winners.

Ballymena United host Faroe Islands club NSI Runavik in the first leg of their Europa League at the Showgrounds on Thursday (7.45pm).