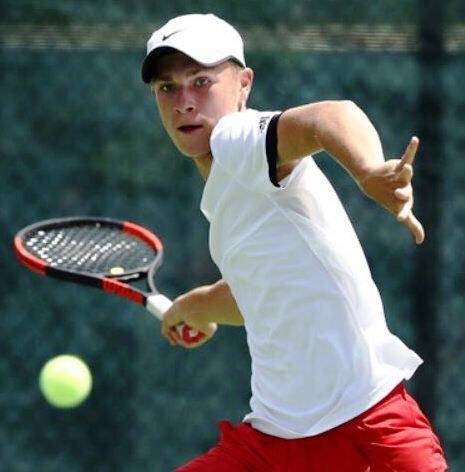 Evan Hoyt isn’t the only Welsh tennis player who has been sampling the rarefied atmosphere of life in the second week of Wimbledon.

While the Llanelli mixed doubles quarter-finalist is blazing a trail not ventured by a Welshman in the senior tournament since 1975, two Welsh Juniors have also been in action in SW19 today.

Unfortunately he bowed out in the second round following a hard fought 6-4 5-7 6-4 defeat at the hands of Ukranian Illya Beloborodko having also reached the main draw in the Boys event at the Australian Open earlier this year.

That wasn’t the end of his tournament for the 18-year-old. Later in the evening, Story, who got the chance to practice with Sir Andy Murray over the weekend, played a boys doubles match.

Once again, however, he was on the losing side as he and partner Oscar Weightman were beaten by America’s Cannon Kingsley and Alexander Zgirovsky, of Belarus 6-2 3-6 6-3.

Meanwhile, 17-year-old Morgan Cross from North Wales and her partner Amelia Bissett, were also beaten over three sets when they lost to Polish pairing Weronika Baszak and Martyna Kubka 4-6 6-4 6-2.