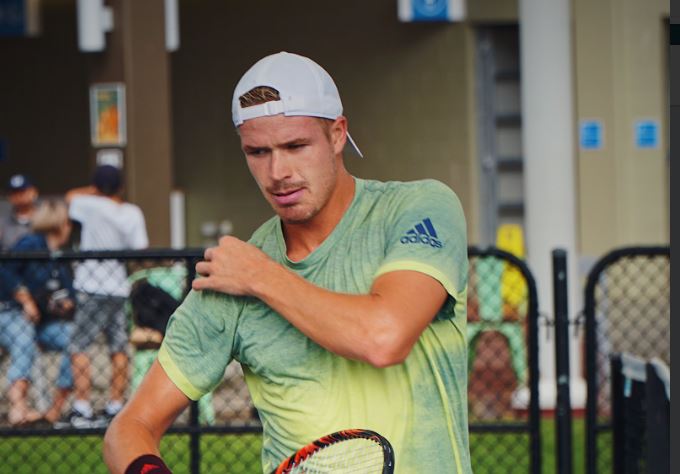 Evan Hoyt will face doubles test with his partner Luke Johnson at Wimbledon.

Welsh tennis number one Evan Hoyt has overcome a shoulder niggle to win his first tournament back on court.

Hoyt claimed his sixth title of the year at the Heraklion M15 tournament in Greece, coming back from 5-2 down in the final set against Austria’s Jonas Trinker.

The Welshman had not played since early April when he went out of the Bolton M25 tournament at the quarter-final stage.

However, he was soon back into the swing of things during his first round match in Greece as he swept past home player Petros Tsitsipas in straight sets 6-2,6-4.

The right hander, who had been hoping to play Challenger events in Korea before the injury struck, continued his fine form in the last 16 match as he swept aside America’s Dusty Boyer 6-4, 6-1.

Ireland’s Peter Bothwell fared little better in the quarter-final as Hoyt demonstrated he was back in the kind of form which had seen him win three singles titles and eight doubles tournaments across Europe, America and Australia over the past year.

Hoyt dispatched Bothwell 6-1, 7-5 to book himself a place in the semi-finals against Markos Kalovelonis, of France.

It was business as usual as Hoyt won the first set 7-5, but the Frenchman became the first player to take a set off him by claiming the second on a tie-break.

However, the former Llanelli Tennis Club player secured his final spot by taking the deciding set 6-4.

The final saw Hoyt go a set down for the first time in the tournament as Austrian Trinker took the first set 6-4.

Hoyt hit back in the second to level the match at 1-1 thanks to a 7-6 tie-break win.

A see-saw final then witnessed the Austrian take the initiative once again in the final set as he surged into a 5-2 lead.

But Hoyt wasn’t to be denied as he reeled off five straight games to take the deciding set 7-5 and clinch his third singles title of the year.

With the British grass court season now on the horizon, Hoyt will turn his attention to the formidable task of trying to claim a qualifiers spot at Wimbledon for the first time as a senior.