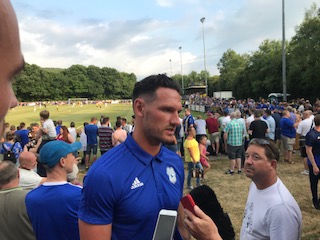 Bluebirds captain Sean Morrison is back in the top flight and says: “I always believed I would play Premier League football again.”

‘Mozza’ played against Manchester United three times during 2013-14, the season after Reading had won the Championship title to go up.

While Morrison and his Royals were facing the likes of Liverpool, Manchester City, United, Spurs and Co, Cardiff City were on their way to winning the Championship and earning their first taste of Premier League football.

Now Morrison and the Bluebirds are back. The Plymouth-born centre-half led Cardiff to runners-up spot behind Wolves and was named the club’s player of the year.

“I always knew I would get back to the top level,” says Morrison. “To achieve that with Cardiff is incredible for me.

“It’s taken me four years and has been a hard slog, but I am excited about the challenge ahead and we will all be ready for it.

“I played a handful of games for Reading at Premier level, but it’s something I am proud of. It puts me in a place where I know what we are going to face.

“Junior Hoilett played around 100 games at the top levels another lads have experienced games here and there. Any amount of Premier appearances are an advantage.

“Those boys who haven’t played at that level before are hungry to do it now and test themselves to the limits.

“Premier football is the chance for our team to show what we can do and we intend to do ourselves proud.

“The gaffer (Neil Warnock) knows what he is doing. We have a great squad and a great manager, the right guy for the job.”

Morrison made his first pre-season appearance of the season during Cardiff’s 6-0 win  against Tavistock AFC, playing alongside Bruno Manga at the heart of defence.

Their contrasting styles complemented each other with the tough, effective Morrison, a natural leader and organiser, looking solid alongside the composed and highly skilled Manga, who reads the game so well.

It will be interesting who Warnock opts for at the heart of defence with Sol Bamba due to make his first appearance at Bodmin Town on Wednesday and Matt Connolly, who went on for Morrison after an hour at Tavistock, also in the reckoning.

Cardiff have added new signings Bobby Reid, Josh Murphy, Greg Cunningham and goalkeeper Alex Smithies to the City squad and Morrison says: “They are fantastic signings. When I saw who was coming in I thought ‘Yes, good players.’

2/2 Thank you to the incredible managers, coaching staff and, most of all, our volunteers, for all you did behind the scenes and in the run up to make the evening as special as it was ❤️🖤@CardiffCityFC #upthelambs #TeamTavistock ❤️🖤 pic.twitter.com/BkKgeiJYJP

“New players need to fit into the dynamic and become part of the group in our changing room and they have all done that.

“We have to apply ourselves as a squad and if we do that the World is our oyster. All three promoted teams stayed up last season and that ensures our belief is as high as it possibly could be.

“Set pieces will be one of our strengths. If we can score a few goals from corners and free-kicks that could really set us up for the season.”

Morrison signed for Cardiff the season after relegation back to the Championship and he has played a major role in ensuring the club has made steady progress over the last four seasons.

“We have not set any targets yet and that may well come over the next couple of weeks, but clearly the number one target is to stay up,” he says.

“We have stepped up to the top tier. It’s going to be tough this season, but incredibly exciting.”