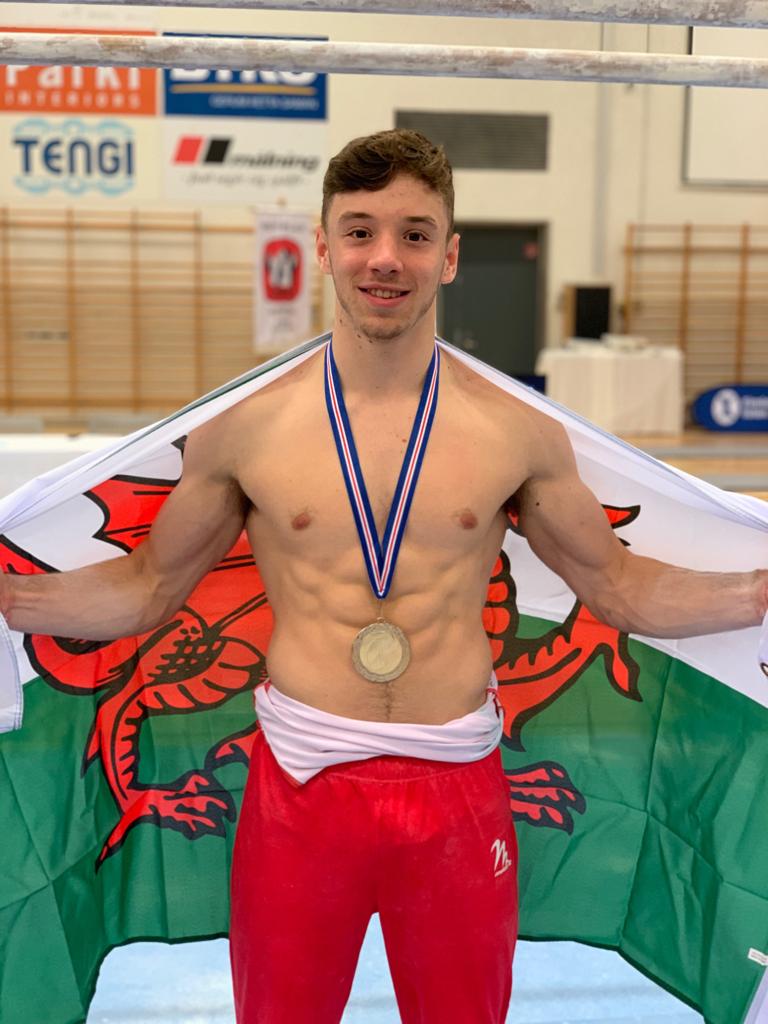 Josh Cook at the 2019 Northern Europeans

Josh Cook will be back competing in Cardiff this month for the first time since the Covid-19 pandemic struck – and his return could not be more timely as he targets a second Commonwealth Games.

The 21-year-old, who hails from Penarth and is currently at university in Chicago, was part of Team Wales on Australia’s Gold Coast in 2018 and is one of the men’s artistic gymnasts battling it out to secure their spot for Birmingham this summer.

A shoulder injury forced him to miss the Men’s British Championships and Northern European Championships, both staged in Cardiff, at the back end of last year, but now he is looking forward to returning for the Welsh Artistic Championships.

“I can’t wait,” said Cook ahead of his homecoming.

“It’s going to be a great feeling to finally be back in Cardiff alongside the Welsh boys.

“We have built a great team atmosphere over the last few years and I’m really excited to step onto the competition floor again after over two years.

“The last year or two have been really difficult with various injuries and setbacks and, of course, training through the pandemic had its own challenges also. But I am in a good place at the moment, chasing down my all-around scores again, which is really exciting.”

Cook was crowned Welsh all-around champion ahead of the last Commonwealth Games four years ago and it would no doubt boost his chances for Birmingham should history repeat itself.

He continued: “2018 was a highlight year for me in my transition into a senior gymnast.

“Becoming the Welsh senior all-around champion in the lead up to the Games that year was a big confidence boost.

“I remember that Welsh Championships being a really important selection event for the Commonwealth Games and my big goal was to hit the all-around selection score on both days, which I managed to do. Winning the all-around title was a product of that and for me, it was the icing on the cake that weekend.

“A good all-around score is my main goal and regardless of the outcome I know it will be an exciting and challenging day for us all, battling it out until the last routines.”

Cook began his gymnastics journey aged four at Somersault Gymnastics Club before moving to YMCA Barry at the age of 10, where he trained regularly for a decade.

Competitive sailing runs in his family and he was a keen sailor himself when he was younger, but instead decided to fully concentrate on gymnastics.

Also in 2019, at the Northern Europeans in Iceland, he won gold on rings, bronze on parallel bars and was part of the Wales men’s team that won a silver medal.

He currently resides out in Chicago, where he is studying Specialised Chemistry – as well as training and competing – at the University of Illinois Urbana-Champaign.

Now four years older and with more experience under his belt, Cook would relish another opportunity on the big stage this summer.

“I think having time to look back and reflect on the incredible experience the last Games provided me has made me appreciate and enjoy this process even more,” said the former Stanwell School pupil.

“Making it to a second Commonwealth Games has been one of my biggest goals over the last four years and so I think it’s fair to say it would mean a lot to represent Team Wales once again on such a big stage.

“Not to mention it’s in Birmingham, so we will have so many more friends and family members able to come and make the experience even more memorable.

“Of course, being four years older is four more years of experience and understanding, which hopefully will have translated into my gymnastics.”

There has only ever been one male gymnast to have won a medal for Team Wales down the years at the Commonwealth Games – David Eaton who won a silver medal on high bar in Melbourne in 2006.

But the development and gathering momentum of the men’s team over the past four years in particular means there is now growing optimism that could be added to this summer, as well as challenging for what would be a first men’s artistic team medal for Wales.

Cook and Benji Eyre are the two remaining members of the team who finished 7th in the Commonwealth men’s team final in Australia four years ago, when Emil Barber was a travelling reverse. All three are on the long list for Birmingham. The team have been bolstered by the additions of Rio Olympian Brinn Bevan and Paris 2024 hopeful Joe Cemlyn-Jones, while Jacob Edwards and Theo-Amari Ochana are also in contention.

Last November the team went one better than in 2019 as they won gold at the Northern Europeans.

“The team has been able to form such a tight bond so quickly,” said Cook.

“Whenever we are together, whether that be virtually or in person, we are always having a good time and I think that has translated into the team’s performance, as you saw at the last two Northern Europeans.

“I think everyone is really motivated by our potential and our goals heading into the Games. I don’t want to jinx anything, but we are building a strong team that I think can produce some quality results.”

Despite not being able to be there in person, Cook was still very much a part of the team’s success and celebrations at the last Northern Europeans.

“It was great to see the boys do well,” he said. “It was a really strong performance from everyone. I called the boys as soon as they finished to congratulate the team and the coaches, and everyone was in very high spirits.

“Obviously, I wish I was there with them, but I was still coming back from a few ongoing shoulder issues and just wasn’t ready.”

Cook will head back to Chicago following the Welsh Championships and will be kept busy, competing in the BIG10 and NCAA Championships with the Fighting Illini men’s gymnastics team.

And he is certainly enjoying the experience.

“The training is awesome, I am able to train alongside a really competitive team of 20 gymnasts who all push each other every day,” he said.

“Besides gym, It’s the perfect environment for me to continue to study my university degree while still pushing my gymnastics career both for the university and for Team Wales.”

The 2022 Welsh Artistic Championships will take place at the Sport Wales National Centre in Cardiff over the weekend of Saturday 26th and Sunday 27th February.