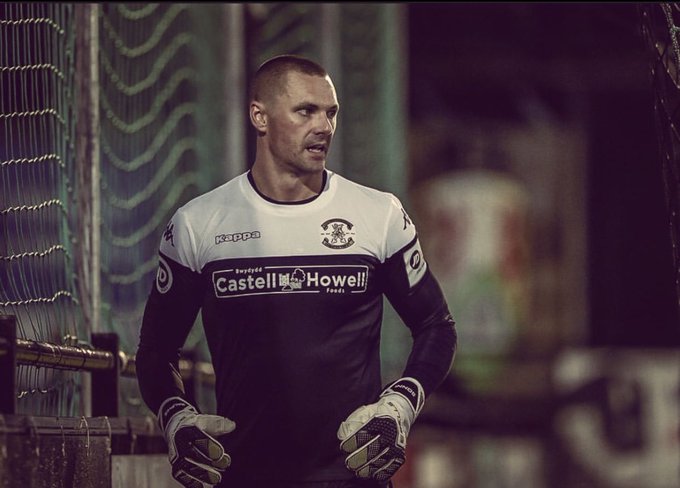 Lee Idzi is to remain at the club where he has spent 12 years.

Carmarthen Town goalkeeper Lee Idzi has given the club a huge boost by confirming his intentions to remain at Richmond Park despite the club’s recent relegation.

Carmarthen’s demotion into the Cymru South was confirmed this week after the FAW executive board met to decide the fate of clubs finishing in promotion and relegation spaces.

Idzi, who has played in the domestic top-flight for the last 12 seasons, had been tipped by some to move on to remain in the Cymru Premier – but revealed on social media that he wants to help get the club back up.

“We’ll be back and now is the time to show some loyalty and help a club with good people bounce back. I want see this club get back where it belongs ” he confirmed on Twitter.

The 32-year-old completed his sixth season with the club after signing from Bangor City in 2014, where he was a runner-up in both the Welsh Premier League and Welsh Cup.

Idzi, who has also previously had spells at Haverfordwest and Neath, made 22 appearances last season and will be crucial to Carmarthen’s chances of successfully springboarding back into the Cymru Premier.

In the Cymru South, Carmarthen will find themselves in an improving division that has increasingly become a battleground of fallen top-tier sides seeking a return to better times, and ambitious up-and-coming clubs harbouring intentions of following the pathway taken by the likes of Penybont and Cardiff Met into the Cymru Premier.

There is little doubt next season that Carmarthen will drop into the Cymru South as heavyweights.

They will be the team to beat when football eventually resumes and opposing sides will visit Richmond Park hoping to claim a scalp at Carmarthen’s expense, or indeed frustrate them when the Old Gold are on the road.

Having been an ever-present in the Cymru Premier since 1996, it might take some time for the dust to settle on what has been a disappointing and ultimately heartbreaking season.

After all, this is a club who’ve not only had their pride wounded after being relegated in contentious circumstances, in a season which was abruptly cut short – but Carmarthen Town are also finding their way as a club following the sad passing of long-serving and hugely popular club director Gareth ‘G.O’ Jones last November.

Idzi’s decision to commit to the club long-term is the first step forward in their rebuild when football resumes.

A solid and experienced stopper, Idzi will become an influential figure and driving force to help Carmarthen overcome the challenges they will face on their journey back and now that he has led by example in committing to the club, there will be hope that others will follow.

The core of the current Carmarthen side is comprised of experienced and proven Cymru Premier players, although whether the club’s budget will allow them to keep that nucleus of the squad is unclear.

But with the leadership on the pitch they will possess from the likes of Idzi, with the integration of some fresh, talented youngsters and with the experience of Kristian O’Leary, a manager hungry to make his mark, the framework is there for Carmarthen Town to bounce back.

The journey has already begun.