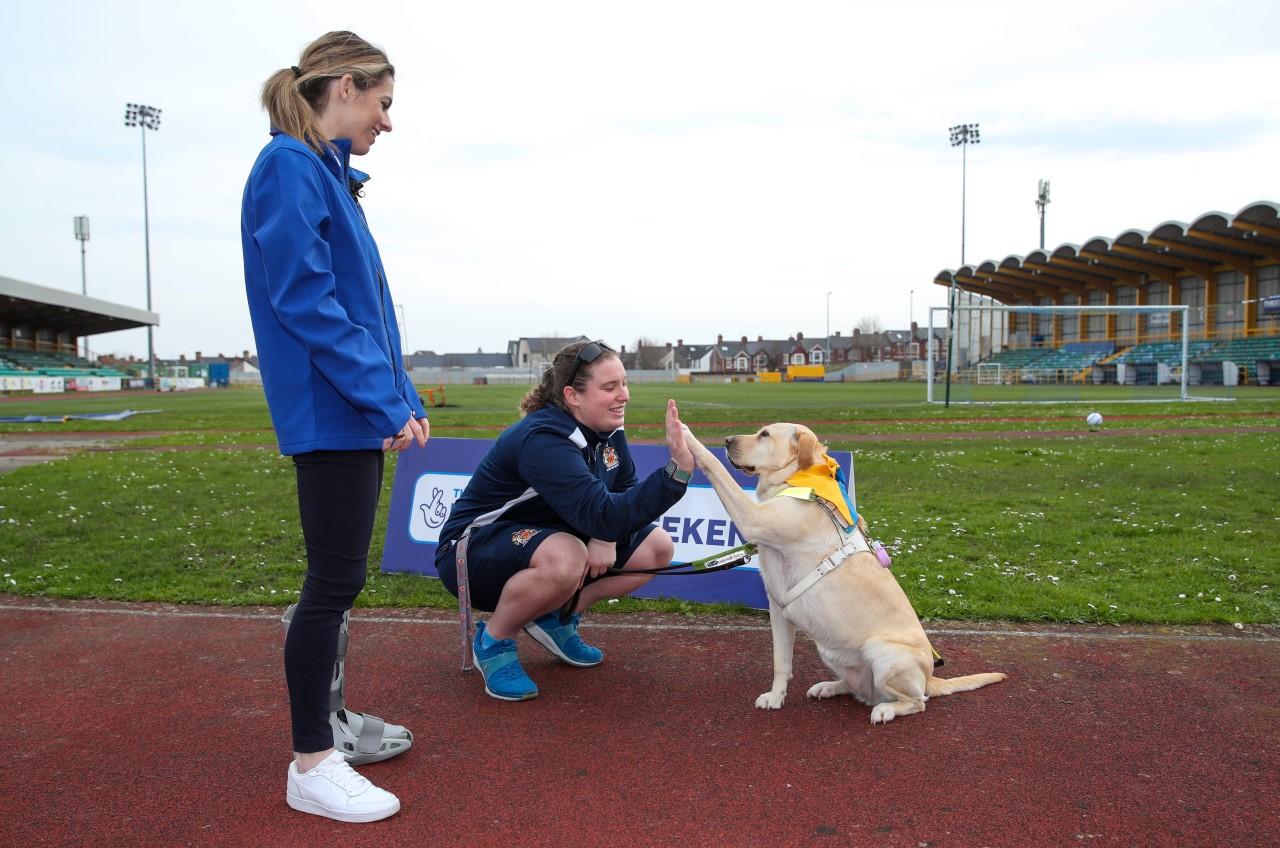 The power of football helped build the Red Wall in Wales, but it can also move mountains.

Just ask Barry Town United coach Chloe McBratney, who believes the same sport that has taken Wales fans to the threshold of a first World Cup finals is also helping her fulfil her coaching ambitions.

This month, grassroots football has been celebrating so many people’s love of the game with the help of the National Lottery.

The National Lottery Football Weekends campaign – which is making over 100,000 ‘Buy One Get One Free’ tickets available for non-league and local football club games across the UK – recently reached Barry.

It is there that Chloe, who is registered blind, currently coaches the Pan Disability side at Barry Town United,.

Their aim is to make football as inclusive as possible and Chloe is thankful for the support of the National Lottery in helping the community game cope with the consequences of the pandemic.

Karen Carney is currently doing a Q&A with some of our @BTUAcademy and @BTULADIES players 💛💙 pic.twitter.com/FMzvAhn2CP

“My parents first took to me to play football when I was six years old,” she says.

“I was in an all-boys mainstream team until the age of 11 as from that age girls can’t play with boys anymore.

“I then fell out of football for a couple of years, but at the age of 17, I decided I wanted to coach disability football.

“I got in touch with Disability Sport Wales and they alerted me to the coaching for the future programme and that led to me coaching at the Vale Reds, who have since merged with Barry Town United.

“I started off as a volunteer and I didn’t really know much about coaching at the time but seven years later I am now one of the main coaches at the club.”

At the height of the pandemic, football clubs such as Barry were struggling for their very existence due to the consequences of not being able to make any money on match days.

Come down and support @BarryTownUnited at home at 2:30pm. It’s the @TNLUK football weekend and tickets are buy one get one free if you bring a lottery ticket. #tnlfootballweekends pic.twitter.com/45EknFFJt3

In response, The National Lottery provided £12.5 million of emergency funding to support the community game, and this played a crucial part in helping clubs like Barry survive one of the most difficult times in their history.

“It was so important that we got funding from the National Lottery during Covid-19 as we are so much more than just a football club,” adds Chloe.

“It’s an amazing feeling knowing you can come every single week and improve not only your football, but your social aspects, too.

“I think football not only helps your physical health but your mental health as well.

“Coming back from the disruption of the last two years has been really important, as football is the one constant for a lot of people with disabilities so it’s great to give them that routine again.”

McBratney says her team is very inclusive and caters for lots of different disabilities. Football, she says, should always be accessible to anybody.

“A lot of people may think that football is just for boys or able-bodied athletes, but it’s definitely for everybody.

“We have a very inclusive environment here at Barry and there is a team for everyone.

“A lot of our players have a wide range of disabilities, so our coaching techniques have to be adaptable and different every week.

“You can have a player on a good or bad day. Some of our players are visual learners, so we do a demonstration for them and hopefully they will then pick it up.

“If we need to go over it multiple times then we will. But it’s such a great feeling seeing players come here every week and improve.”

Former England, Arsenal and Chelsea star and now Sky Sports pundit Karen Carney is also an ambassador for the National Lottery, and she was on hand to meet Chloe and stress the importance of football in the community.

Congratulations to Chloe McBratney, the winner of Sporting Achievement of the Year sponsored by @sullyclub . Chloe is registered blind, but still manages to coach at Barry Town Pan Disability, recently undertaking her C license for goalkeeping. #BCA19 pic.twitter.com/tl85FO3aQR

“Clubs like Barry give people like Chloe an opportunity to inspire so many people including myself,” says Carney.

“Particularly after a couple of difficult years with the pandemic, Chloe’s playing such an important role in the community as she’s helping to get people active again and showing that sport can be a positive to anyone.

“I would encourage anyone to go down to your local team and enjoy football.

“I fell in love with the game by watching my local team, Solihull Moors as it was great to see my local community in action.

“Whether that’s the person doing the burgers and teas or speaking to the players and coaches, there is a role for everyone in community football.”

McBratney believes football helped her come to terms with her deteriorating health and hopes she can be a role model to others.

“I do hope I can be an inspiration,” she says.

“When I was growing up, I was told my sight would never deteriorate but it did six years ago and football really helped me come to terms with that.

“The fact I could still coach through the problems with my visual impairment was the best feeling ever.

“If you want to do something, then you can find a way.”