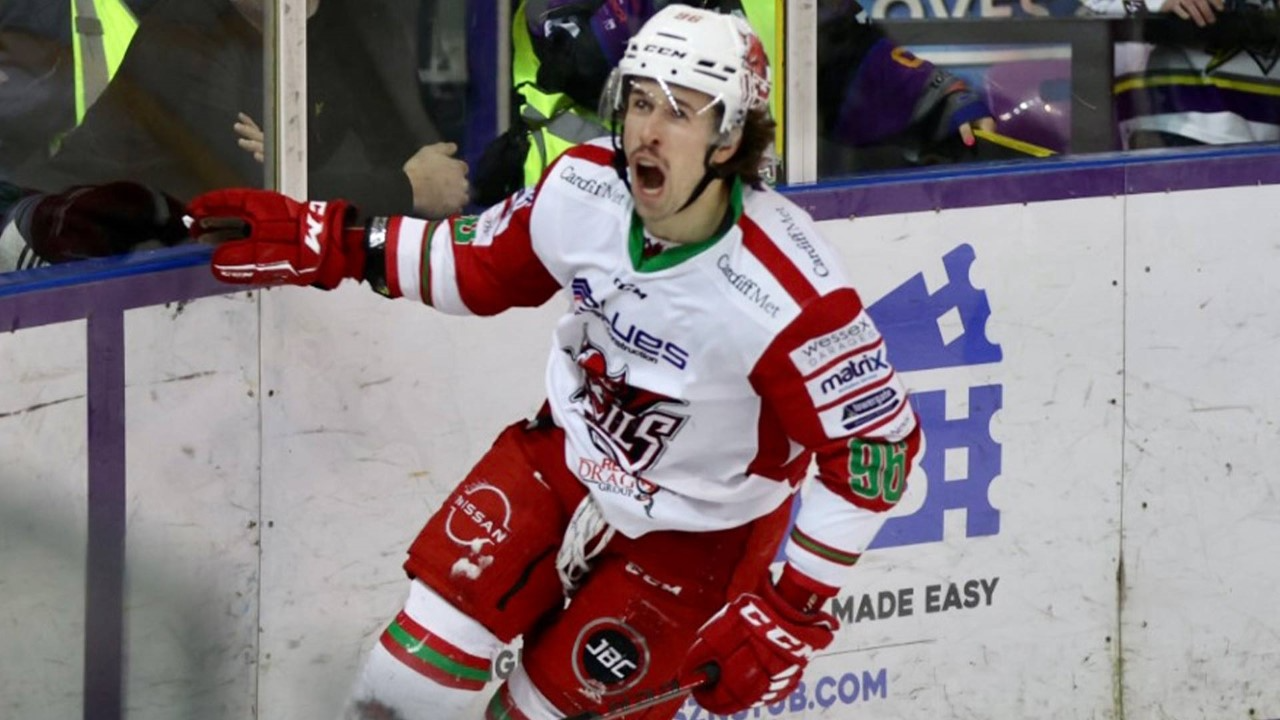 Interim Cardiff Devils head coach Brodie Dupont was pleased with the team’s execution against the Manchester Storm, as they rallied to their first win following the departure of Jarrod Skalde.

The Devils scored three times in the final period to bounce back from Saturday’s overtime defeat to the Guildford Flames.

Cole Sanford had twice put the Devils ahead before Brandon McNally and Brodie Reid’s empty-net goal sealed the win.

Dupont took over as coach, along with Neil Francis, for the first time this weekend following the shock departure of Skalde.

“We went over some things from last night and the guys responded really well to all the adjustments we wanted to make,” said Dupont.

“It was a hard-fought battle, you always know coming into Manchester is going to be a fast game and they’re really good at home, but we executed our game plan and it was fun to watch.”

After a scoreless opening period, Sanford broke the deadlock when he finished off a pass from Jake Coughler to beat Jason Bacashihua at 29:02. Tayler Thompson levelled things up just under three minutes later for the Storm to leave everything to play for in the final period.

Sanford’s second of the night 4:43 into period three restored the Devils lead, with assists coming for Coughler and Trevor Cox. The Storm piled on the pressure in response, but could not find a way past Mac Carruth in net, who stopped 31 shots on the night.

The Devils eventually put the game out of reach on the power play when Brandon McNally finished off a pass from Stephen Dixon at 56:46 and Justin Crandall found Brodie Reid for the empty net goal to make it 4-1 with 1:41 left on the clock.

On Saturday night, Brett Ferguson scored 53 seconds into overtime as the Guildford Flames beat the Devils in three-on-three hockey for the second weekend in a row.

Ferguson added to his earlier assist when he drove around Cole Sanford and snuck the puck through Carruth, forcing the Devils to settle for a point in their first game without Skalde.

On the night when Brendan Mikkelson returned to the line-up following a four-week injury lay-off, it was fellow defenceman Matt Register, who fired the puck through traffic to beat Kevin Lindskoug to make it 1-1 on a second period power play at 21:06.

Visiting Guildford led 4:17 into the game when Ferguson found Levi Cable all alone out in front of goal.

Both goalies picked up the Man of the Match for their respective teams with Kevin Linskoug finishing with 40 saves and Mac Carruth making 35 saves.

The Devils have already secured third-place in the Elite League table this season as they head into the final weekend of the regular season.

They wrap up their schedule against the Dundee Stars at Ice Arena Wales on Saturday and the Nottingham Panthers (away) the next evening, before facing the sixth-placed team in a two-game play-off quarter-final.

Who will actually finish sixth in the final standings is less clear however, with Nottingham, Coventry, Guildford, Dundee and Glasgow all clamouring to finish in an advantageous position, with some teams also having a three-game week.

Tickets for the Devils home play-off game on Saturday 23 April are now on sale via the team’s official site.