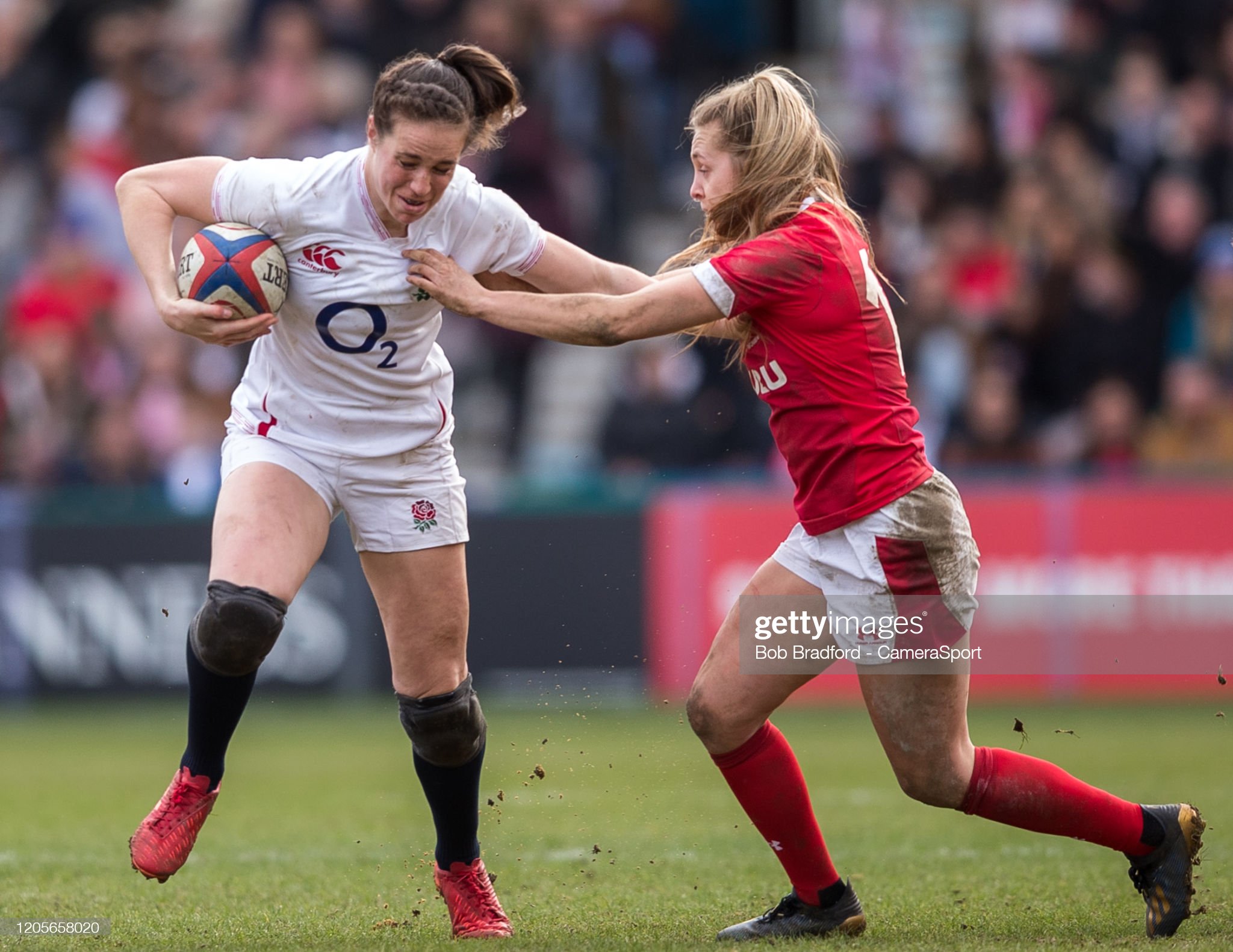 Hannah Jones will be a big influence, if Wales are able to take a famous victory at Kingsholm (Photo by Bob Bradford - CameraSport via Getty Images)

After two thrilling comeback victories, Wales coach Ioan Cunningham has made five changes to the team to face England in round three of the TikTok women’s Six Nations on Saturday.

Wales are currently unbeaten in their campaign so far after coming from behind twice to win their respective matches against Ireland and Scotland.

But that has not prevented Cunningham from shaking things up, with five players swapped and a positional switch in the back row.

Prop Donna Rose, who scored two tries after coming off the bench against Ireland, will start at loosehead, while Sisilia Tuipulotu will make her first international start, partnering fellow Gloucester-Hartpury lock Gwen Crabb.

Sioned Harries starts at No.8 with captain Siwan Lillicrap switching to the blindside flank.

There is a new half-back pairing with Ffion Lewis, a try scorer last weekend against Scotland, starting with Robyn Wilkins.

Cunningham said: “These players are all deserving of their places, whether they are starting or on the bench. Every player has a key role to play, as we saw against Ireland and Scotland.

“We are excited by this big challenge against the No 1 team in the world. On average, they are scoring about eight tries a match so we are in no doubt about the extent of the task.

“However, we want to compete with the best teams in the world so this is a great opportunity for us to test ourselves and progress.

“We are proud of the way we came back to win both our first two games but we must start better and get our penalty count down. They are two of our work-ons plus we need to convert any scoring opportunities.

120 – @WelshRugbyUnion's @Alishabutchers1 has made 27 carries, 29 tackles and hit 64 rucks in this year's #TikTokW6N, her combined total of 120 carries, tackles and rucks is the most of any player after the opening two rounds. Everywhere. pic.twitter.com/jGnTRDUaN4

“The players train and play with and against the England players week-in, week-out so while we respect the side, there is familiarity, not fear.

“We are looking forward to playing at Gloucester. Ten of our matchday squad are Gloucester-Hartpury players and it will be fantastic to play in front of a huge crowd there which will hopefully include some Welsh voices too.”

Scotland were 12 points in front at half time a week ago and were confident that they could build on that lead but another huge fightback from Wales meant they ended the game as 24-19 Victors.

Meanwhile, England showed no mercy against Italy in Gloucester as they ruthlessly ran in 12 tries resulting in a 74-0 victory.

With just over 𝟏,𝟎𝟎𝟎 tickets remaining for our #ENGvWAL game this Saturday, make sure you are part of a sell-out Kingsholm crowd!

If you're not heading to our European Cup fixture, you know where to be👇

Backs coach Richard Whiffin believes the team can improve on their performance to frustrate England.

He said: “If we can put the fast starts from our autumn campaign together with the strong finishes, we had in the last two games then we can put together the 80-minute performance that we are after.

“It is going to be a tough game against England, but it’s about trying to execute our game plan the best we can to frustrate them and give them something to worry about.

“We want to trouble England with the ball, they have been comfortable defensively so we have a few options that we can hurt them with.

“From an attacking point of view, we want to be in their 22 and maintain pressure that way, or from defensive we need to work harder.”

While Wales have shown improvements during this campaign by securing two bonus point wins, a strong and quick start is needed if they have any hope of beating the Red Roses on their own turf.

105 – @EnglandRugby's Ellie Kildunne (105), was one of just three players to carry the ball for 100+ metres in the opening round of the 2022 @Womens6Nations, along side teammate Helena Rowland (102) and @WelshRugbyUnion's Hannah Jones (101). Centurions. pic.twitter.com/Fwau6SAGAL

Welsh Centre Hannah Jones is relishing the challenge but says her side must go into the game with an open mind.

She said: “We absolutely can’t afford to have a slow start, we are playing against one of the best teams in the world, if we start slow, we will be punished so we must try to start fast.

“We need to go in with an open mind of trying our best as we got have nothing to lose.

“I am look forward to seeing if we can perform against them and the pressure of 11,000 fans with the world’s best in front of you.

“If you want to be the best, you have got to play the best and I am looking forward to that challenge.”

Wales are currently third in the Six Nations table and are on course for their first Triple Crown since 2009, should they beat England in Gloucester

It is set to be an entertaining encounter as over 11,000 fans are expected at the Kingsholm Stadium on Saturday with the match broadcast live on BBC Two with kick off at 17.15pm.