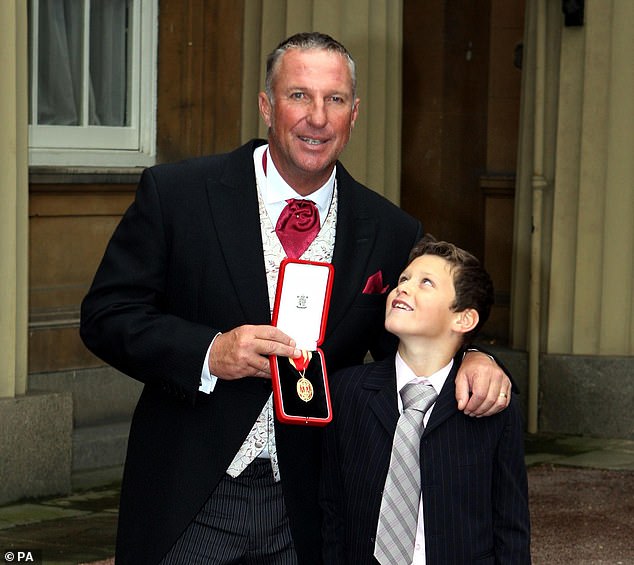 James Botham, aged nine, with his grandfather Ian. after he received his knighthood. Pic: Getty Images.

“Jimbo” as he is known to grandfather Ian and dad Liam, was born in Cardiff when Liam was playing for the capital club 22 years ago.

This afternoon, he will fulfil his very personal sporting ambition when he pulls on a red jersey to make his debut against Georgia in a fixture that has taken on added significance due to the team’s unwanted losing habit.

Rookie Cardiff Blues flanker Botham junior has played just 13 games of senior rugby but has been thrown in for an international debut in the Autumn Nations Cup.

He says: “Everyone gives me grief saying ‘Your granddad couldn’t be more English if he tried’ but I was born in Wales and I had the Welsh flag painted on the wall in my room as a kid.

“I always wanted to play for Wales. I knew about my grandad. We were all playing cricket in the garden one day and he’s got a cigar in his mouth, a glass of wine in one hand, and a cricket bat in the other! I did ask my grandma ‘Was he any good at cricket?’ She said: ‘He was alright at some point!’

“Growing up in school playing cricket myself I realised it a bit more as people would try and get into me when I came out to bat. That all just goes over my head – it doesn’t bother me.

Back in March 2016 we caught up with the Cardiff Blues flanker and his grandfather Lord Botham following his Wales Under-18s debut 👇 pic.twitter.com/NnhwpBaFRK

“He (Lord Botham) tells me be professional, ignore the haters you’ll always get, keep your head down and try and become the best you can. He says to enjoy myself – that’s the main thing.”

Botha may have born in Cardiff but he then moved to the north of England and was educated at Sedbergh.

But he made 500-mile journeys to Wales for junior camps and those have now paid off.

“My family have always been there helping me from day one. The main man who was there for all my games was my great-grandfather Gerry Waller,” he says.

“He was Kath, Ian’s wife’s, dad. He was there every game and would come up afterwards with his packet of Jelly Babies.

“Before he died I did promise him I would try to play for Wales. He will be looking down on me and hopefully I can do him proud. I’ll 100 per cent think about him in the anthem.”

Botham faces a tough ask topping the legacy of his grandfather who will always be remembered for his miracle performance in the 1981 Ashes Test match at Headingley.

But he is now carving out an international career of his own and was picked to face Georgia on the back of just two training sessions with Wales.

Botham was only called up to Wayne Pivac’s squad as an injury replacement on Monday.

He has been fast-tracked in to start as one of 13 changes made by under pressure Wales boss Pivac whose team must win against whipping boys Georgia to end a run of six straight defeats.

There are also first starts for English-based tyros Callum Sheedy and Louis Rees-Zammit.

Pivac’s novice back-line has just 77 Test caps between them and 65 of those belong to full-back Liam Williams.

He and captain Justin Tipuric are the only players to retain their places from the hammering by Ireland.

“I’m over the moon. Obviously I’ve dreamed of this moment since I was a little kid. For it now to be a reality, it still hasn’t sunk in yet,” says Botham, who has represented Wales at all junior levels. “Georgia rely on the set-piece. Bringing dominance and getting myself over the ball is my goal.

🆕 James Botham and Johnny McNicholl get amongst it in training after yesterday’s call-up 🏴󠁧󠁢󠁷󠁬󠁳󠁿 #AutumnNationsCup pic.twitter.com/j6fiZp2k9M

“We’ve been unfortunate with previous results. Everyone wants to kick on and I’m pretty sure we will. We’ve got a new mindset – the team has changed a fair bit – and I’m looking forward to it.”

Captain for the day Justin Tipuric is convinced the injection of new blood can give Wales a lift and end a run of six successive defeats with victory over the abrasive Georgians.

Tipuric says of Botham, “He is an athlete. When he gets a bit of space, it can open up. He is a very skilful player.

“I played against him at the end of last season for the Ospreys against Blues, he is a top player and will be a class player when he is older that’s for sure.”

Defeat at the Aviva Stadium in February started Wales’ poor form and last Saturday they were back there with Ireland again too strong.

Head coach Wayne Pivac will expect a different result this weekend and is also confident the picture will look different in two-and-a-half months’ time.

“There is pressure to get results now, but that will be ratcheted up in the Six Nations and we’re aware of that,” he said.

“We’ll learn a lot not only about the young players and how they fit into the group and planning through to the World Cup, but also about the elder statesman too and where they’re at with their games and the work which needs to be done.

“In some cases post-lockdown, it’s about getting them back to where they were pre-lockdown.

“Some of our world-class players are probably by their own admission not hit their straps yet. It’s a case of learning for everybody and understanding that when it comes to the Six Nations, everyone will have to be playing at a high level for their clubs.”

One thought on “It Was Always Rugby . . . And Always Wales, Insists Jimbo Botham As Georgia Test Awaits”