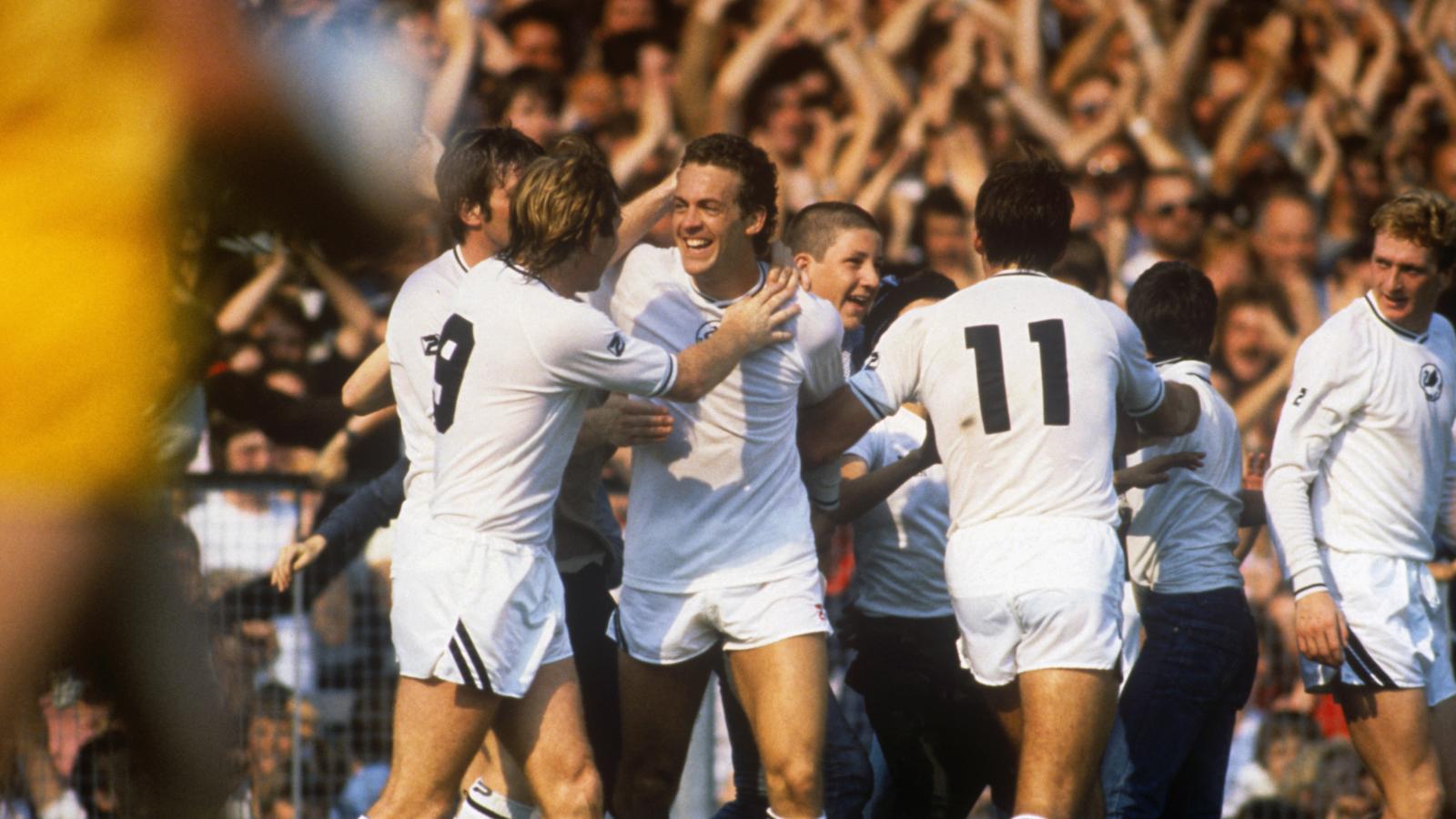 Exactly 40 years ago this weekend, Swansea City played their opening match of the 1981-82 season – their first in the top flight after decades in the lower divisions. The 5-1 victory over Leeds United was one of the greatest days in the club’s history and a young Owen Morgan was there to see it.

On April 23, 1975, a triumphant Leeds United team celebrated on the pitch at a packed Nou Camp Stadium having booked their place in the European Cup final.

Billy Bremner, Joe Jordan, Peter Lorimer and all had just drawn 1-1 with a Barcelona team boasting the likes of Dutch legends Johann Cruyff and Johan Neeskens in front of 110,000 fans.

Wyndham Evans, Robbie James, Alan Curtis and all had lost 1-0 to a Rochdale team boasting the likes of goalscorer Bob Mountford in front of 1,548 fans.

The result meant Swansea finished third from bottom in English football’s bottom division, requiring them to apply for re-election to the Football League.

At that moment, the two clubs could scarcely have been further apart in the game’s domestic pecking order.

Arguably, England’s finest League club was looking forward to a European Cup final, while Wales’ most lowly League outfit was forced to go cap in hand to the other 91 clubs to plead for their future status in the top four divisions.

Fast forward just over six years to 3pm on August 29, 1981, and Swansea City were welcoming Leeds United for the opening fixture of the club’s debut season in the top flight of English football, the old First Division.

Two hours later, a packed Vetch Field was celebrating a thumping 5-1 victory and this correspondent was literally pinching himself in disbelief.

How had the re-election candidates humbled the European Cup finalists from just half a dozen years before?

Exactly four decades later, the events of that unforgettable August afternoon and the six years leading up to it seem even more unbelievable than they did at the time.

Swansea’s bid for re-election in the summer of 1975 had been successful and the club set about turning its fortunes around under manager Harry Griffiths and chairman Malcolm Struel.

Having worked tirelessly to stabilise the club, Griffiths stepped down in February of 1978, feeling he couldn’t take the Swans any further.

Cardiff-born Toshack had won just about everything there was to win at Anfield and now he was coming to lowly Swansea in the Fourth Division. The move was remarkable in itself.

Sadly, club stalwart Griffiths, who had stayed on at the club as Toshack’s assistant, died of a heart attack after a home match on April 25, 1978, with the Swans on the verge of promotion from the bottom division.

The rest, as they say, is history. Toshack presided over an unprecedented and meteoric rise from the Fourth to First Division – rounded off by a 3-1 win over Preston North End on the last day of the 1980-81 season.

I missed out on that historic occasion because my parents hadn’t allowed me to join the army of Swans fans who descended on Deepdale.

Unfortunately, I would not be amongst them. I was destined to listen on the radio at home and dream of what it must be like to be watching from those packed terraces, especially when the final whistle sounded.

On this day in 1978 John Toshack arrives in Swansea to take up the player/manager role at the Vetch, met by Chairman Malcolm Struel and Harry Griffiths who is graciously stepping down from the hot seat to let Tosh take the reins, but will remain as his assistant #Swans pic.twitter.com/W66jCImTBe

And so began the anticipation of the most exciting day in the club’s history to date.

The summer of 1981 seemed to be the longest I had ever experienced in my 14-and-a-half years.

The almost four months between the final whistle at Preston on May 2 and the Division One kick off against Leeds on August 29 seemed to last an eternity.

With it being an odd-numbered year, there wasn’t even a World Cup, European Championship, Olympic Games or Commonwealth Games during that summer to help pass the time.

There was a decent cricket Test Series between England and Australia, you may have heard of.

But even Bob Willis and Ian Botham’s heroics in the Headingly Test during the Ashes series, which would go down in history bearing Beefy’s name, wasn’t enough help pass the time any faster.

Pakistan’s brilliant batsman Javed Miandad tried to help by smashing century after century for Glamorgan during that summer, but the last Saturday in August just couldn’t come quickly enough.

I even had to put up with the seemingly endless build up to a Royal wedding.

I know for many it was an occasion to be celebrated, but for a football-loving 14-year-old from the Amman Valley it really wasn’t the kind of distraction I was looking for during that summer – although it did mean my parents finally bought our first colour TV!

At least I’d be able to watch the Swans on Match of the Day and the Big Match in full Technicolor when the season finally got underway and watching televised snooker would no longer be the challenge it had been previously.

There was, however, some football to enjoy – a Wales team featuring Swans players Leighton Phillips, David Giles and Leighton James beat Iceland 4-0 in Reykjavik in a World Cup qualifier.

And Seb Coe and Steve Ovett were swapping the mile record backwards and forwards while John McEnroe hurled his famous, “You cannot be serious” line at Llanelli umpire Edward James on his way to winning the Wimbledon men’s singles title.

But my main attention was focussed on trawling newspaper articles along with TV and radio reports (no internet updates, social media gossip or Sky Sports News in those days) for any rumours of new signings arriving in readiness for the Swans’ first season in the top flight.

I wasn’t disappointed on that front, to be fair.

The first signing certainly upped the growing excitement when England international centre forward Bob Latchford was bought from Everton for £125,000.

Latchford was a big name signing and it certainly confirmed manager John Toshack’s intent to make good on his promise that the Swans weren’t going into the First Division “just to make the numbers up”.

Another hugely experienced international was the next to sign, in the shape of Wales’ record breaking goalkeeper and former Swan, Dai Davies, who sadly passed away earlier this year.

The Swans then doubled their previous record transfer spend to splash out £350,000 on promising Liverpool defender Colin Irwin.

By the time the season-opener came around, my excitement was at fever pitch.

When August 29 dawned to be a gloriously sunny late summer’s day, everything seemed to be perfectly in place for what would be the biggest day in the Swans’ history so far.

But even I couldn’t have dreamt just how perfect that day would turn out to be.

Although the Swans had pretty much been written off in many circles as cannon fodder for mighty Leeds, who had dominated English football a decade before, the home side produced one of the club’s greatest performances under a perfect blue sky.

Home-grown hero Jeremy Charles – the latest in the city’s prolific footballing dynasty that had produced legends John and Mel – opened the scoring for the Swans.

Latchford produced a quick-fire hat-trick on his league debut to put the Swans firmly in control.

And then, Curtis – who had been taunted as a “Leeds reject” earlier in the match by the visiting fans – scored an unforgettable individual goal to send me and the vast majority of the 23,489 crowd into absolute ecstasy.

I don’t know whether it was the heat, the packed North Bank or the sheer overwhelming excitement of the occasion, but I thought I was going to pass out as Curtis launched into an iconic celebration.

After rounding off a dazzling run by smashing an unstoppable shot into the roof of the net at the old Double Decker end, where the Leeds fans stood, Curtis wheeled away towards his adoring North Bank, fists raised and punching the air in delight.

He was later quoted as saying: “If the gates had been opened they would not have caught me. I would have been halfway down Mumbles Road.”

Instead, he leapt straight into the cradling arms of the late Robbie James, where he sat for a couple of seconds, kicking the air in glee before wriggling free and receiving the congratulations of his other team mates.

29/8/1981 – Swansea City explode onto the First Division scene, their debut at the top level culminating in a 5-1 win v Leeds United at the Vetch Field; Jeremy Charles, Bob Latchford(3) & Alan Curtis scoring the goals in an emphatic victory. The Big Boys had been served a warning pic.twitter.com/WiT8jTk3fr

It was exactly how I would imagine celebrating such a joyous goal for the Swans – and here was one of my heroes doing just that for real.

The long summer wait for the Swans’ first top flight match had been worth every single second and had turned out to be beyond our wildest dreams.

The whole occasion was made even more enjoyable by the fact the Swans team that afternoon featured genuine club heroes as well as the new signings brought in to bolster the squad.

They would go on to top the early season table and even led the way again in March, before eventually finishing sixth.

Curtis and Swansea-born James were two of those players who had trudged off the pitch against Rochdale six years before with the future of the club hanging in the balance as Leeds prepared for a European Cup final.

If Carlsberg did football fairytales . . .

2 thoughts on “It’s 40 Years Since Swansea City Wowed The World, Topped The Table . . . And Made Memories For A Lifetime”