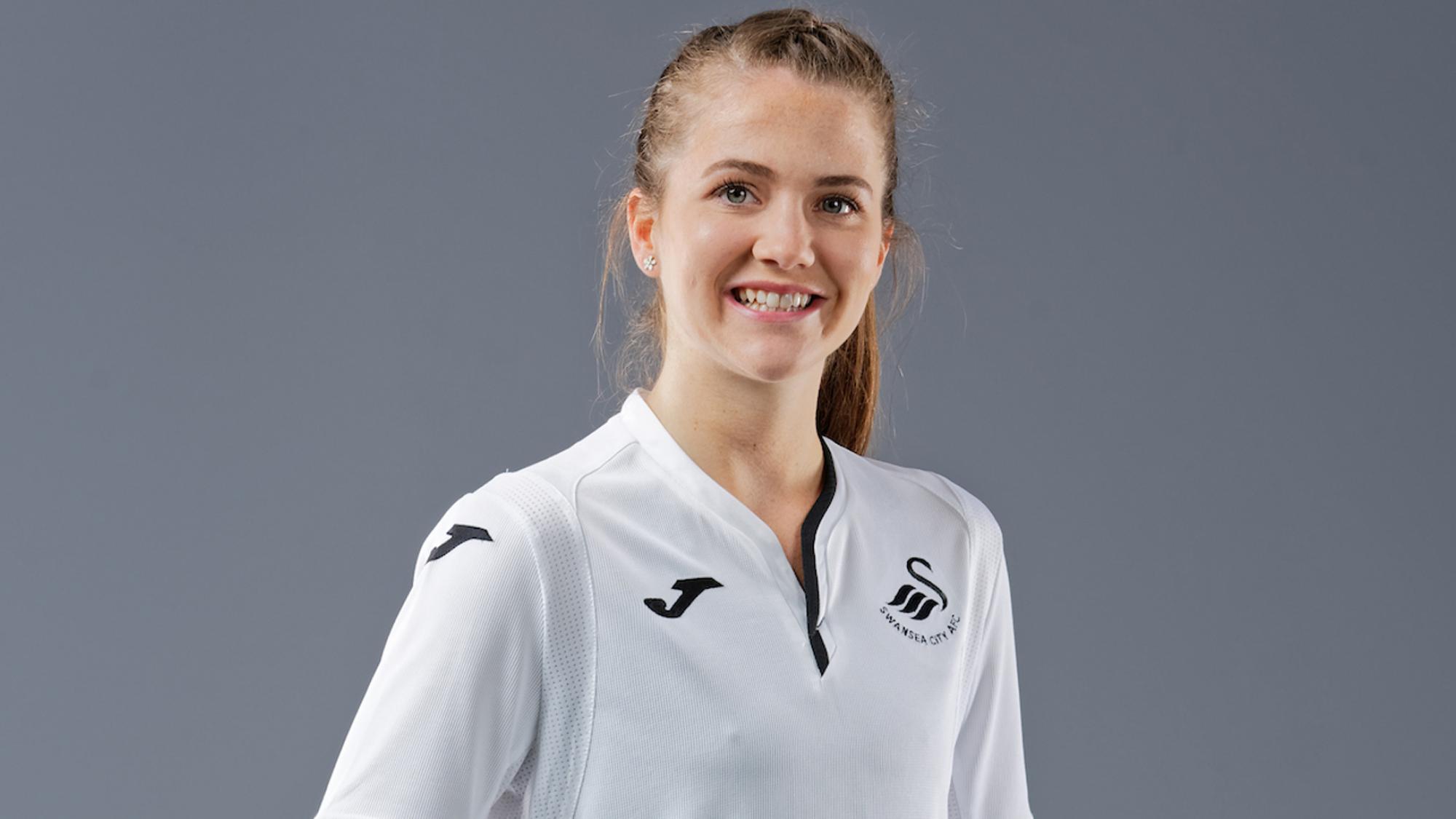 It’s the first senior Welsh derby of the season on Sunday, when Cardiff City Women host Swansea City Ladies at Leckwith Stadium. It’s 40 miles between the cities but that’s nothing for Swansea midfielder Emma Beynon, who’s clocked up far more than that this week as she tells Graham Thomas.

Emma Beynon is the postwoman who plans to deliver a first class victory for Swansea City in Sunday’s derby against Cardiff.

The 24-year-old – who walks 10 miles every day delivering the mail – already has the stamp of approval from her teammates after being voted players’ player of the year for the Welsh champions.

Now, she wants to start the new Welsh Women’s Premier League season by proving an awkward package for Cardiff in an historic derby day dust-up that is being screened live on S4C.

“I walk about 10 miles every day in my job and I do the morning shifts – which I love – as it means I’m done by 2.30pm and it doesn’t affect my football at all,” says Beynon, who was capped by Wales at the Cyprus Cup in 2017.

“Any time I get a knock playing football, I can just go out in the morning at 6.00am and walk it off. It’s been really helpful.”

Beynon works six days a week, which means by the time Sunday comes along – and she is putting in a shift in the Swans’ midfield at Leckwith Stadium – she will have already clocked up 60 miles on top of her regular training.

It’s that kind of commitment that made the former Ysgol Gyfun Gymraeg Bryntawe pupil such an integral part of the Swansea side that won the domestic title last season without losing a game.

It was a campaign cut short by the effects of the coronavirus pandemic, meaning this will be both side’s first competitive game since March.

“This is the longest I have gone without a match for at least 10 years, probably more,” adds Beynon, who has been playing football since she was five years old.

“Having such a massive break over the summer was quite hard – both to keep fit and to stay motivated. But we have been back in training for two months now and we’re desperate to play on Sunday.

“The fact that this game is a Swansea-Cardiff derby and it’s being televised live means it’s a massive occasion for us, for the club, and for women’s football in Wales.

“It shows the progression that has happened over the last few years. I’ve played in televised games before, in the Champions League and for Wales, but there’s a lot of girls who haven’t so it will be really good for them.”

Buzzing to be able to celebrate winning the league with the girls!! Also so grateful to win Players Player for the 19/20 season @SwansLadies 🦢🖤 pic.twitter.com/oQAMXbdKyK

As champions, Swansea will go into the game as firm favourites, particularly as they managed a draw and a win over their fierce rivals last season as part of their curtailed but unbeaten 11-game campaign.

They have also recruited well over the summer with Lauryn Lyons, Laura Davies, Kelsey Thomas, Chloe Tiley, Emily Roberts and the returning Jemma Parfitt all joining the white cause.

For their part, Cardiff have also brought in some new faces, with Sydney Tiiman, Phoebie Poole, Claire Skinner and Charlotte Hastings moving to the capital club, who finished third last season.

“Cardiff is always a difficult game for us,” adds Beynon, a former student and player at Cardiff Met.

“They will be one of the strongest teams in the league this season and there is always a big rivalry between us, just as there is in the men’s game.

“It’s been talked up on social media already, so it’s exciting. As a derby, it has that extra bite to it and no-one wants to lose.”

🗣 @DarbyshireIain: “It’s a big derby. It is the first game of ours that will ever be shown on live TV.

“With a local derby, anything can happen. It’s a massive moment for the Club.”

The TV cameras will add to the increased focus on the fixture, which Beynon hopes may even turn the head of current Wales manager Jayne Ludlow.

There are no current Swansea City Ladies players in her international squad and only one from Cardiff City Women – Claire Skinner – although four players from the other capital club, Cardiff City Ladies, – who play in the National Southern Premier League in the English system – are in Ludlow’s group.

It’s an absence felt sharply in the Welsh Women’s Premier League, with the likes of Beynon keen to prove there is growing talent in Wales as well as in the now star-studded structure over the border.

“It’s no secret that Wales aren’t really looking at the Welsh Women’s Premier League for their players at the moment, which is a shame,” adds Beynon.

“I think there are definitely a few players in our team who could hold their own within that Wales squad, even if they didn’t make the starting 11.

“Maybe as the league gets stronger, Jayne Ludlow will come and have another look, but for the moment occasions like the derby on Sunday, with the TV cameras, can only help progress towards that.”

A historic broadcast: the first ever live game from the Welsh Premier Women’s League. All the action with the Sgorio team, including Nicky John, Sioned Dafydd and Gwennan Harries. K/O 4.00.