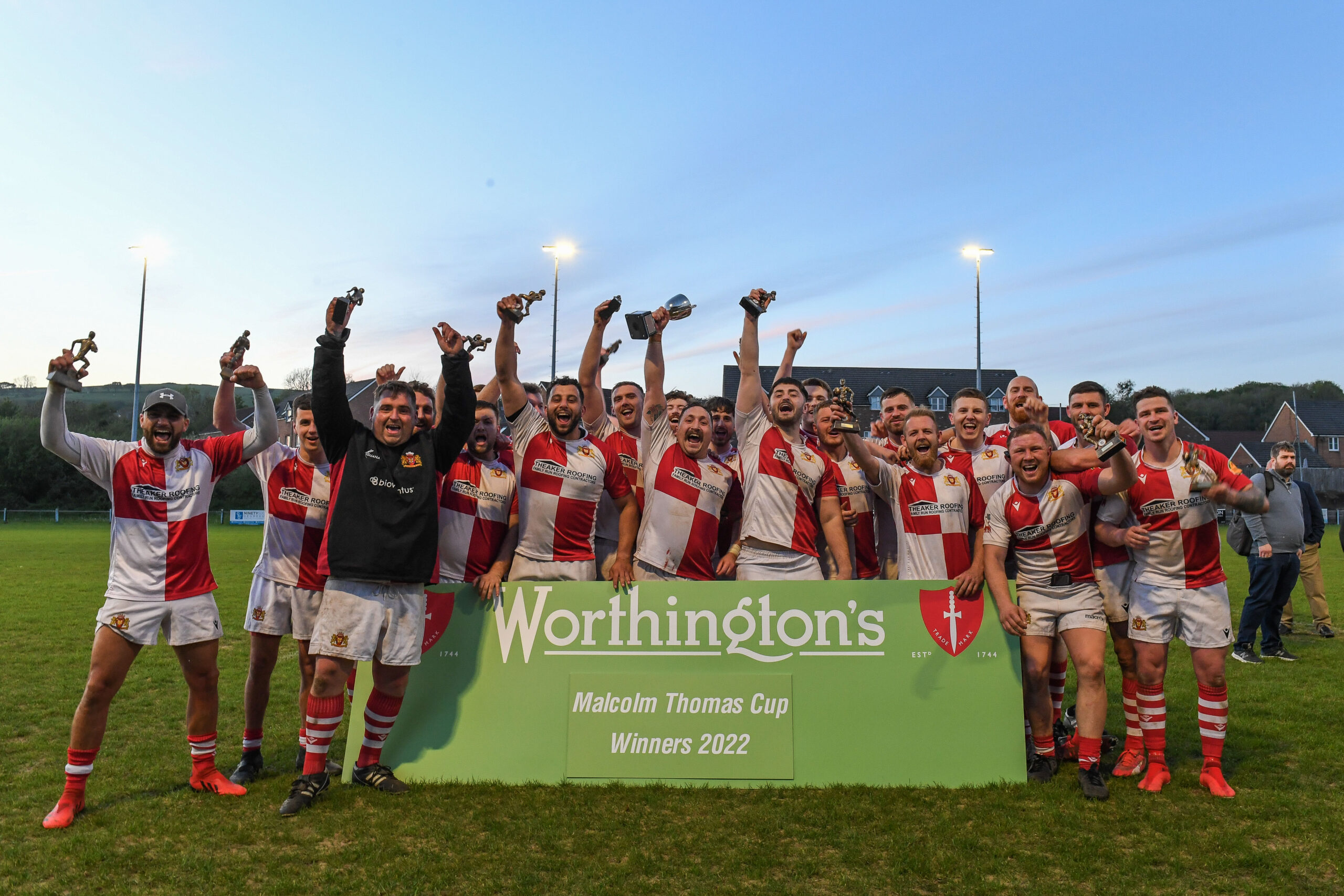 Fairwater retained the Worthington’s Malcolm Thomas Cup thanks to a comprehensive six tries to one 42-25 victory in their final showdown with Cardiff rivals Canton at Llanharan RFC.

In what was a repeat of the 2019 final – which Fairwater won 25-17 to secure their first piece of silverware for 15 years – they once again got the better of their East District counterparts and near neighbours to make it back-to-back cup wins, albeit three years apart as a result of the Covid-19 pandemic.

Brendan McAloon’s side ran in three tries in each half with lock Matt Dinham, tighthead prop Kyle Halley and fellow forward Ethan Denty going over in the first half, before replacement flankers Louis Jones and Michael Bratcher, twice, touched down after the break.

Centre Peter Hughes scored a breakaway try for Canton, who led early on and 19-17 at the turnaround. Full-back Sean Cochlin kicked six penalties throughout as well as adding the extras to Hughes’ try.

After receiving the trophy, Fairwater skipper Thomas Leigh said: “Silverware is silverware isn’t it and a cup in whatever shape or form and format is a special moment for any club. And although it’s been delayed a bit because of Covid, to go back-to-back and in a local derby as well is pretty special for the boys.

“It was really good as captain to be able to pick it up in front of all the boys and the whole community and all the kids as well that came out to watch.”

What a great end to a great evening, we enjoyed a competitive game of rugby against a challenging @CantonRugbyClub we wish to thank our hosts @LLANHARANRUGBY and our Rugby Family, amazing support as always. @FRFCMiniJuniors great turn out 👍 @AllWalesSport @geraintrugby pic.twitter.com/91hJ3fIB3b

Cochlin kicked Canton into a third minute lead before Fairwater hit back in the ninth minute with an unconverted try through Dinham.

Four minutes later Canton led again when wing Ashley Jones set Hughes away for a try with Cochlin adding the extras to make it 10-5.

Cochlin split the posts again on 24 minutes to edge Canton 13-12 in front but Fairwater were over for the third try nine minutes later scored by Denty, unconverted.

However two further efforts from the tee from Cochlin gave Canton a two-point advantage at the break.

Fairwater’s indiscipline at times kept Canton in the hunt but it was their stronger bench that would make the difference and the introduction of Jones and Michael Bratcher – usually starters – proved to be game changing and ultimately swung the match Fairwater’s way.

What a great end to a great evening, we enjoyed a competitive game of rugby against a challenging @CantonRugbyClub we wish to thank our hosts @LLANHARANRUGBY and our Rugby Family, amazing support as always. @FRFCMiniJuniors great turn out 👍 @AllWalesSport @geraintrugby pic.twitter.com/91hJ3fIB3b

Lewis Bratcher and Cochlin traded penalties after the re-start before Fairwater were over for try number four scored by replacement Jones on 54 minutes, unconverted, to lead 25-22.

Cochlin’s sixth and final penalty briefly levelled it up on 58 minutes but, after Lewis Bratcher kicked a penalty on 64 minutes, he then converted replacement brother Michael Bratcher’s try on 71 minutes to open up a 10-point lead at 35-25.

Michael Bratcher had also been on the scoresheet in the 2019 final when he also captained the team to glory on that occasion in the absence of Leigh, who was away on his honeymoon.

And it was Michael Bratcher who would have the final say here on 75 minutes, going over for his second and Fairwater’s sixth try. Lewis Bratcher converted.

“I think starting off, maybe the moment got to us a little bit in terms of it being a cup final; giving away penalties that kept them in the game,” admitted skipper Leigh.

“But we played rugby in the right areas and were clinical and took our opportunities when they came, which is something we’ve been working on.”

Congratulations @FairwaterRFC on a fine win last night played in a sporting manner. Many thanks to the sponsors and @LLANHARANRUGBY for hosting the Malcolm Thomas Final & the supporters for turning up. We look forward to meeting up with our rugby family next season. #UppaCant 🏉

It has been a strange stop-start season following the long Covid shutdown for Fairwater, who have played more cup games than league games this term.

However steered by head coach McAloon, assisted by Ricky Theaker, they have stuck together and went agonisingly close to securing themselves a WRU National Bowl final clash with Llanharan at the Principality Stadium, going down narrowly 17-15 in their semi-final at the hands of Bryncethin.

“It’s been hard for us this season and on the pitch it shows,” added Leigh.

“We’ve not had a run of games and you never get into that momentum.

“But fair play to the boys, they’ve stuck together for the duration of it.

“They’ve kept in touch with each other, kept the banter up, kept the camaraderie up and that kept us together as a close-knit community club.”

This was the fourth meeting between the two sides this season, with the previous three yielding one win each – and a draw.

Fairwater ran out 31-10 victors in the pool stages of the Bowl way back on 21st August last year with the return tie at Canton at the start of October ending 7-7.

The one league meeting between the sides in Three East Central A this term saw Canton run out 24-14 victors at Fairwater on 8th February.