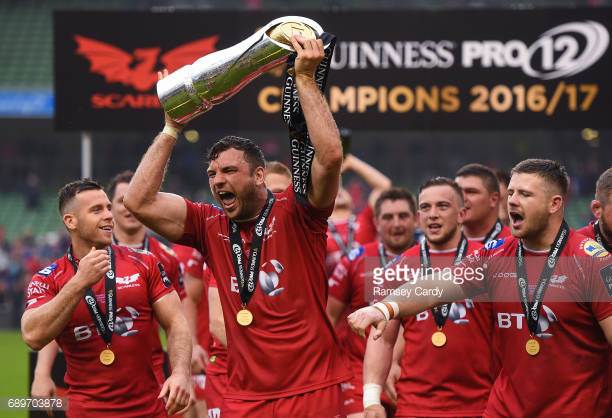 The Scarlets in their most recent trophy-winning days. Pic: Getty Images.

The Scarlets, Dragons, Cardiff Blues and Ospreys are all in action this weekend, as international rugby moves aside and the new format of the Heineken Champions Cup and European Challenge Cup gets underway. James Dodd takes a look at the chances of the four Welsh teams going into round one.

Like most else in our lives, European rugby is different this year. Thanks again, pandemic.

In the top tier competition, the Heineken Champions Cup, there will be two pools, each containing 12 teams.

The top four teams from each pool will qualify for the quarter finals. Teams finishing between fifth and eighth in each pool will go down to the Challenge Cup last 16.

The Heineken Cup pool stage will see teams only having two opponents, both from different pools; where they play each one home and away.

For the Challenge Cup, it is one big group of 14 teams. However, based on last season’s domestic standings, the teams have been split into tier one and tier two, in order to create the fixtures.

Heineken Champions Cup draw made for the 20/21 season.

The top four clubs from each of the two pools qualify for the quarter-finals pic.twitter.com/dhCoObvi2A

This means the top sides in tier one will only have tier two opponents. Overall, the top eight sides after four pool matches will join the eight teams dropping from the Heineken Champions Cup.

The Llanelli outfit are certainly one that will feel they have underachieved in this competition, historically.

They did have an excellent 2017/18 campaign, which saw them reach the semi-finals and lose to eventual winners Leinster at the formidable Aviva Stadium.

However, overall, it has been pretty much doom and gloom in recent years. Last season, they failed to qualify for the top tournament and competed in the Challenge Cup.

This year, they face the familiar foes of Bath and Toulon, with Bath coming up first this Saturday, marking the Scarlets’ 150th tournament match.

Both of these clubs were in the Welsh side’s pool when they had that excellent run in 2017/18 season. In addition, the West Walians played the French side the year before and last year in the Challenge Cup, both in the group stage and in the quarter-finals. Toulon won that one, 11-6.

It has been an average season for the Scarlets so far in the Guinness Pro 14, as they have won three out of seven clashes. Despite this, they sit third in conference B and will be hoping for a least a few international players available this weekend.

It has been confirmed, though, that Liam Williams, Johnny Williams, James Davies and Rhys Patchell will not be available; all due to injury.

Unfortunately, the strength in depth of some of the teams makes it almost impossible to realistically believe they can be champions come the summer of 2021.

However, the 2017/18 Guinness Pro14 winners will most definitely believe they can try and sneak into the quarters, and failing that, will fancy their chances in the Challenge Cup.

They must win both of their home games to stand a chance, and sneak at least one on the road. I believe they will be playing in the last 16 of the lower competition.

For the first time since the 2010/11, the side in Newport will play top flight European rugby. This is probably one of the club’s biggest achievements in the last few years, with their victory over the Scarlets on Judgement Day last year, also up there.

Their recent European campaigns have usually seen a group stage or quarter final exit. However, arguably the club’s best European result was in 2016 when the Dragons beat Gloucester in the quarters at Kingsholm.

A throwback to Wasps’ last European meeting with the Dragons in 2013. We won 20-19 at Rodney Parade to secure top spot in our Challenge Cup pool.

Not sure we would get away with a Sky Blue away kit these days… pic.twitter.com/T2zGbalUp0

This season sees them face Wasps and Bordeaux-Begles, with the English side travelling to Rodney Parade on Saturday evening.

Whilst both teams boast better records than the Dragons, back-to-back recent away wins against Benetton and Glasgow should give the Welsh outfit hope to do well.

One big positive for the region is that they have a blend of youthful and experienced players who are with them every week of the season.

A lot of these Dragons won’t have played in games like these before, certainly not for this particular side, anyway.

This is unchartered territory and should be enjoyed and used to their advantage. If they can pick up some results, then that will be an added bonus.

No pressure could easily mean success. Two home wins is definitely achievable, then it’s just sneaking that one on the road. Like the Scarlets, I can see them dropping down to the Challenge Cup.

Having won the competition in 2010 and 2018, the capital region will be excited going into Europe again this year.

It has been a fruitful exercise in the past, with the Pro 14 league campaign, which tests depth, usually causing more problems.

The Blues didn’t quite fire on all cylinders last season as they failed to get out of their group, but this is something that will be expected this year, given the international quality in the squad.

They have Newcastle and Stade Francais, two teams that they definitely capable of beating. These are also two sides the Blues have faced only on rare occasions in recent time.

After what looked like a promising start, John Mulvihill’s men have only won one match in their last six, that being at home to Benetton.

They will be grateful for the return of their Welsh stars as they try and get some belief and confidence back in the camp.

Josh Adams will be looking to keep his excellent scoring record for the team in blue. Other notable returners this week are Rhys Carre, Dilion Lewis, Seb Davies, Shane Lewis-Hughes and James Botham.

This is an excellent opportunity for the Blues to forget about the situation in the league and play with a bit of freedom.

They will have their stars back for Europe and the Welsh derbies, so it should be an exciting time.

I feel that the last 16 is a must, and then from there, with one-off games, I won’t be surprised if we see them competing in another final in 2021.

After an extremely poor season in the last campaign, they can have no complaints about being in the second tier tournament.

The Ospreys were in the top competition last time – and ended winless after six rounds with defeats to Saracens, Munster and Racing 92. Not an easy group at all.

This year, their two opponents are Castres Olympique and Worcester Warriors. The Frenchmen travel to Wales this weekend for the round one clash.

It has been an average start to the season for the Ospreys, with three wins from a possible seven. Their latest was a tight 24-22 victory over Benetton, after being 10-22 down with 10 minutes left.

However, the ever-reliable Alun Wyn Jones will be back, as will be Justin Tipuric, who impressed hugely in Wales’ win over Italy last Saturday.

Other players who are available include Nicky Smith, Rhys Webb and George North.

Just like Cardiff Blues and any Welsh teams who find themselves in the Challenge Cup, there is no reason why the Ospreys can’t win it.

Leicester Tigers and Stade Francais will also fancy their chances along with the Welsh sides. The Ospreys should reach the last 16 – from there it really depends on who they are playing and where.

Could the Ospreys and Blues bump into each other? That would add some spice to a harsh winter.