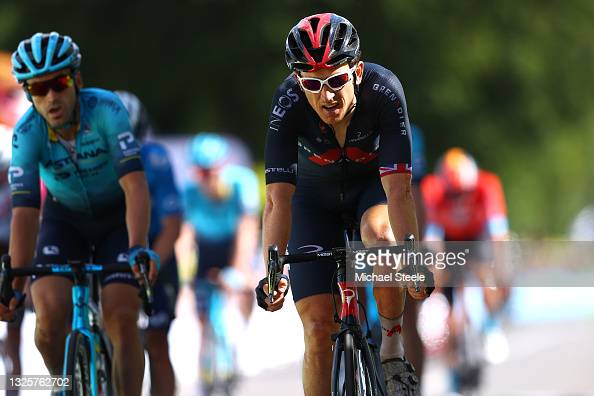 Geraint Thomas crosses the line at the end of a tough second stage of the Tour de France. Pic: Michael Steele/Getty Images

Geraint Thomas lost time to his main Tour de France rivals on the brutal finish to stage two at Mur-de-Bretagne.

Wales’s 2018 Tour champ slipped from 10th overall to 20th spot as the spectacular start to this year’s battle for the Yellow Jersey continued.

Not the best day but there’ll be better ones to come. Chapeau @mathieuvdpoel 🎩👏 #TDF2021 pic.twitter.com/482CAUzZ7W

The young Dutch star left the rest of the field trailing in his wake on the infamous steep slope as he twice attacked.

Thomas’s Ineos Grenadiers team had controlled the pace earlier on the short climb but were blown away by the attacks from rival teams.

Cardiff-born Thomas, who led the third group of riders across the line,  is 28 secs adrift of reigning champ Tadej Pogacar and 27 secs behind another Tour favourite in Primoz Roglic.