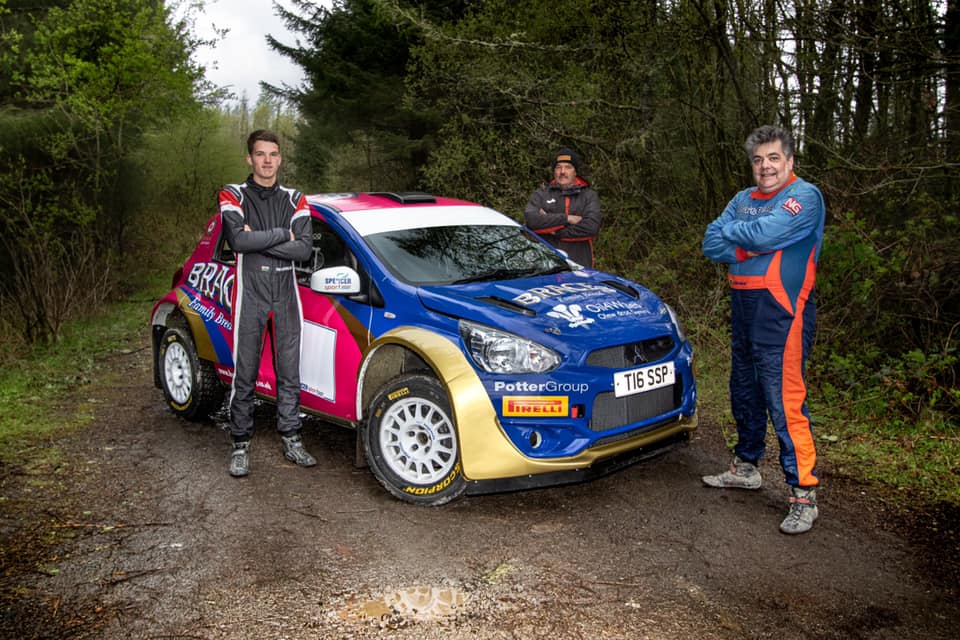 Tom Llewellin will move up into a powerful four-wheel drive car this year and contest the MRF Tyres BTRDA Rally Series – and most, if not all, the Motorsport UK Pirelli Welsh Rally Championship – in a Mitsubishi Mirage.

Covid-19 restrictions limited Llewellin to one rally last year, although he scored one of his ever best results on his only outing – finishing first two-wheel drive, first historic and ninth overall on the Visit Conwy Cambrian Rally in February 2020.

After more than a year out of the saddle, Llewellin drove the R5-spec Mirage at Walter’s Arena recently – getting 65 high-speed miles of loose surface testing under his belt.

The Mitsubishi has been developed by the Penrhiwllan-based Spencer Sport team, which will lend technical support during the events.

And you won’t be able to miss the car flying through the forests, thanks to support from Brace’s Bakery, Pirelli, Motul, Potter Group and Oil 4 Wales and a vibrant red, gold and blue colour scheme.

“The Mitsubishi Mirage is a step up from what I have been driving,” says Llewellin.

“The top speed is pretty similar to the Mk2 Escort, but you can brake a lot later into the corners and because of the suspension and four-wheel drive you can corner an awful lot faster.

“The acceleration out of slow corners and hairpins is something else too!

“The plan is to concentrate on the BTRDA Rally Series, but as a lot of those events are also a round of the Welsh Rally Championship, we’ll see how that goes as well.”

Having competed in his first rally just two weeks after his 14th birthday in 2015, Llewellin will make his four-wheel drive debut on the Builth Wells-based Nicky Grist Stages, which is scheduled to take place in the mid-Wales forests of Llyn Login, Monument, Halfway and Crychan on Saturday 10 July.