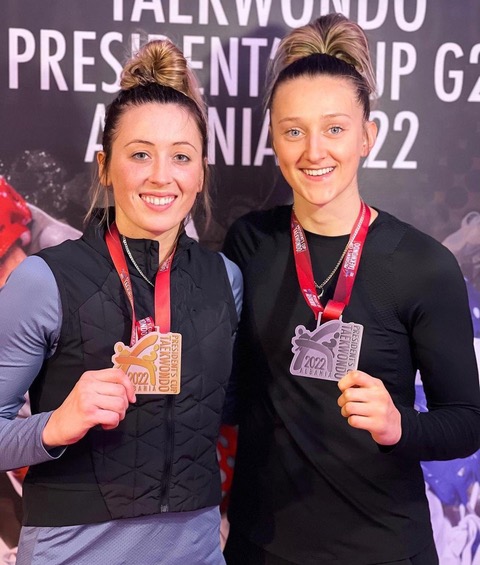 Jade Jones and Lauren Williams with their President's Cup medals

Jade Jones believes she is back on course for the 2024 Paris Olympic Games after winning her first tournament since Tokyo 2020.

Wales’ former taekwondo double Olympic champion is convinced she is on the right path for more Games glory after producing a stunning success in her return to action following the disappointment in Japan last summer.

Jones made a stunning return to action at the World Taekwondo President’s Cup in Albania, winning gold in her first tournament back after her shock defeat in Tokyo.

That capped a superb comeback to the mat for the 28-year-old from Flint. She defeated Belgium’s Raheleh Asemani 18-4 in the semi-finals and Russian Elena Kriveichenko 13-6 in the last eight.

“It was a tough day, mentally and physically,” said Jones. “But it was great to be back in the mix and I am chuffed I really enjoyed it.

“It feels super good to be back on top. It was good practice for the European Championships in Manchester in May.

“But it is also important to pick up ranking points to qualify for Paris 2024. It’s fantastic to start the Paris journey with a win and 20 ranking points.

“It was good to take a step back after Tokyo, even more so this time when it didn’t go so well. But it made me realise again how much I love the sport and why I do it.”

Jones will now go forward to the Belgium Open in March to continue the countdown to the Euros.

Triple world champion Bianca Walkden had to settle for bronze at +73kg. “It’s not the colour I came for,” said the Liverpool heavyweight.

“But you brush it off, learn from it, fix it and then come back stronger,” added Walkden after her 4-3 golden point defeat to Turkish rival, Nafia Kus.

Caden Cunningham from Huddersfield underlined his potential by reaching the semi-finals before Croatian Ivan Sapina, the World and European bronze medallist, halted his progress with a 12-8 victory.