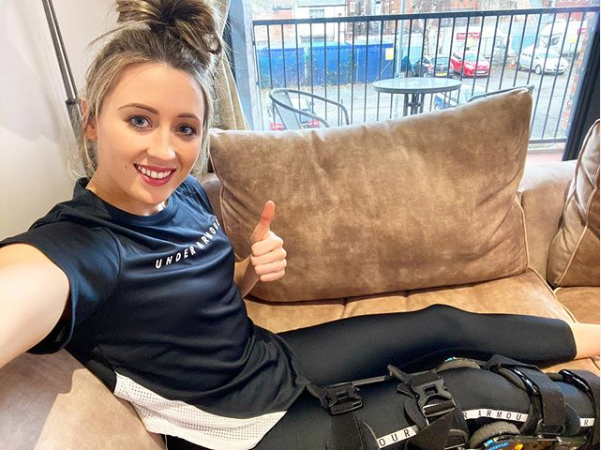 Injured Jade Jones has her leg in a brace.

Jade Jones has vowed that nothing is going to deter her from making Taekwondo history by winning a third Olympic gold this year despite suffering a knee ligament injury in a competition in Sweden.

The reigning World, Olympic and European champion was forced to pull out of the final last week and has her right knee in a brace after suffering a grade 2 tear of her medial ligament.

But in typical fashion, the 26-year-old north Walian fired a warning shot to her rivals for gold in Tokyo later in the year by promising to come back even stronger.

“So, I tore my MCL in a competition in Sweden last week which forced me to pull out of the final. There is no good time to get injured, but luckily it is only a minor set-back (grade 2 tear),” she told her Instagram followers.

“With the help of a great team I will be kicking in a few weeks and back stronger than ever before the summer! The re-hab grind starts on Monday.”

Having struck gold in London in 2012 and Tokyo in 2016, Jones is bidding to become the first TKD athlete to win three gold medals at the Olympic Games in Tokyo later this year in the -57kg class.

She is already the only Welsh woman to win two Olympic golds and will be bidding to join Richard Meade, the three day eventer, on three later this year. Paulo Radmilovic holds the Welsh record with four in swimming and water-polo.

“To still only be 26 and going for my third Olympic gold with the chance to make history is just really exciting,” says Jones.

“I still feel like I have got so much to learn and so much I can improve from now until the Olympics. I am really excited to see what place I can be in.

“I believe I can win in Tokyo and make history. It’s just getting there now and doing it on the day. Hopefully it happens.”

Jones, who has not ruled out competing at Paris in 2024 in the past, hopes she can leave a lasting legacy in the sport, whenever she does decide to call time on her career.

“Obviously, it would be amazing to have made true history and done something that no one has ever done and really planted my mark.

“Other than that. I just want to be a role model and show if you dedicate your life to something and give everything you have got what can come of it.

“Hopefully, it can inspire lots of other athletes to try and be the best they can be in their sports.”