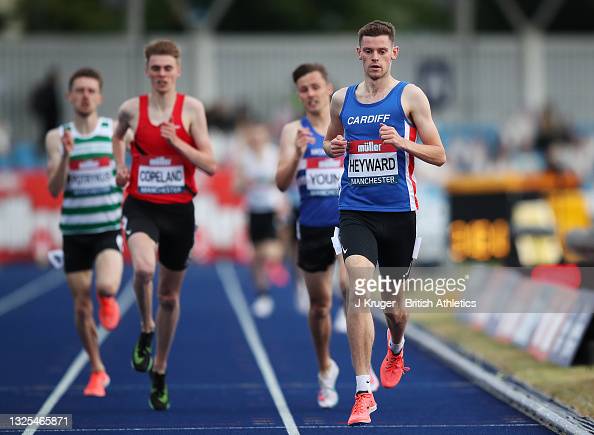 The American-based athlete cruised to victory in the fourth heat of the 1500m with fellow Welshman Piers Copeland finishing second to also qualify automatically for the final.

It was Copeland who made the early running in the final heat with Heyward tucking in behind in third place.

But as the field reached the halfway stage, Heyward took over the running and eased smoothly away from the field.

Such was his lead down the home straight the Oregan Track Club Elite athlete – sporting a Cardiff Athletics vest on the night – virtually walked over the line in a time of 3:44.94.

Copeland, who like Heyward already has the Olympic qualifying time, finished second in 3:45.66

A top two place for either in what will be a high quality and competitive final, due to start at 3.35pm on Saturday, would book an automatic place on the plane to Tokyo next month.

The former Welsh 1500m champion finished fourth in her heat to claim an automatic spot in the final in a time of 4:28.47

Leading the way was Swansea Harrier Daniel Beadsley, who finished second in his heat to former European champion Zharnel Hughes, clocking a time of 10.84 to claim an automatic qualification place.

Cardiff pair Sam Gordon and Jeremiah Azu also gained automatic qualifications by finishing second in their heats in 10.85 and 10.86 respectively.

Ironically, the fastest of the Welsh sprinters was another Cardiff athlete Arron Owen as he finished fourth in his heat but claimed one of the non-automatic qualifying places with a time of 10.79.

The Commonwealth Games sprinter and Great Britain bobsleigh Olympian finished fifth in her heat to claim a fastest loser spot in 12.19.

The Swansea Harrier was drawn in the same heat as Jessie Knight, one of four athletes in the field to have run the Olympic qualifying time.

But Granville, who suffered several deep vein thrombosis last summer, narrowly led for much of the race before Knight eventually came through to win in 56.88.

Welsh Commonwealth Games athlete Granville finished second in a time of 58.09, which was fast enough to earn one of the fourth fastest loser qualifying spots.

Cardiff’s Owen Smith booked himself a place in Saturday’s 400m final by claiming a fastest loser spot as he finished third in his heat clocking 47.26.

Swansea Harrier Joe Brier was one of a number of 400m favourites who fell by the wayside in the heats as he finished third in his race clocking 47.43.

In the decathlon, Cardiff’s Curtis Mathews threw a shot put personal best of 15.21m before withdrawing from the competition.

Saturday’s events begin with the decathlon and heptathlon at 10am. The first final of the day will be the women’s hammer featuring Wales’ Amber Simpson at 12:20pm.

You can catch all action on the British Athletics website where you will also find the timetable and start lists.