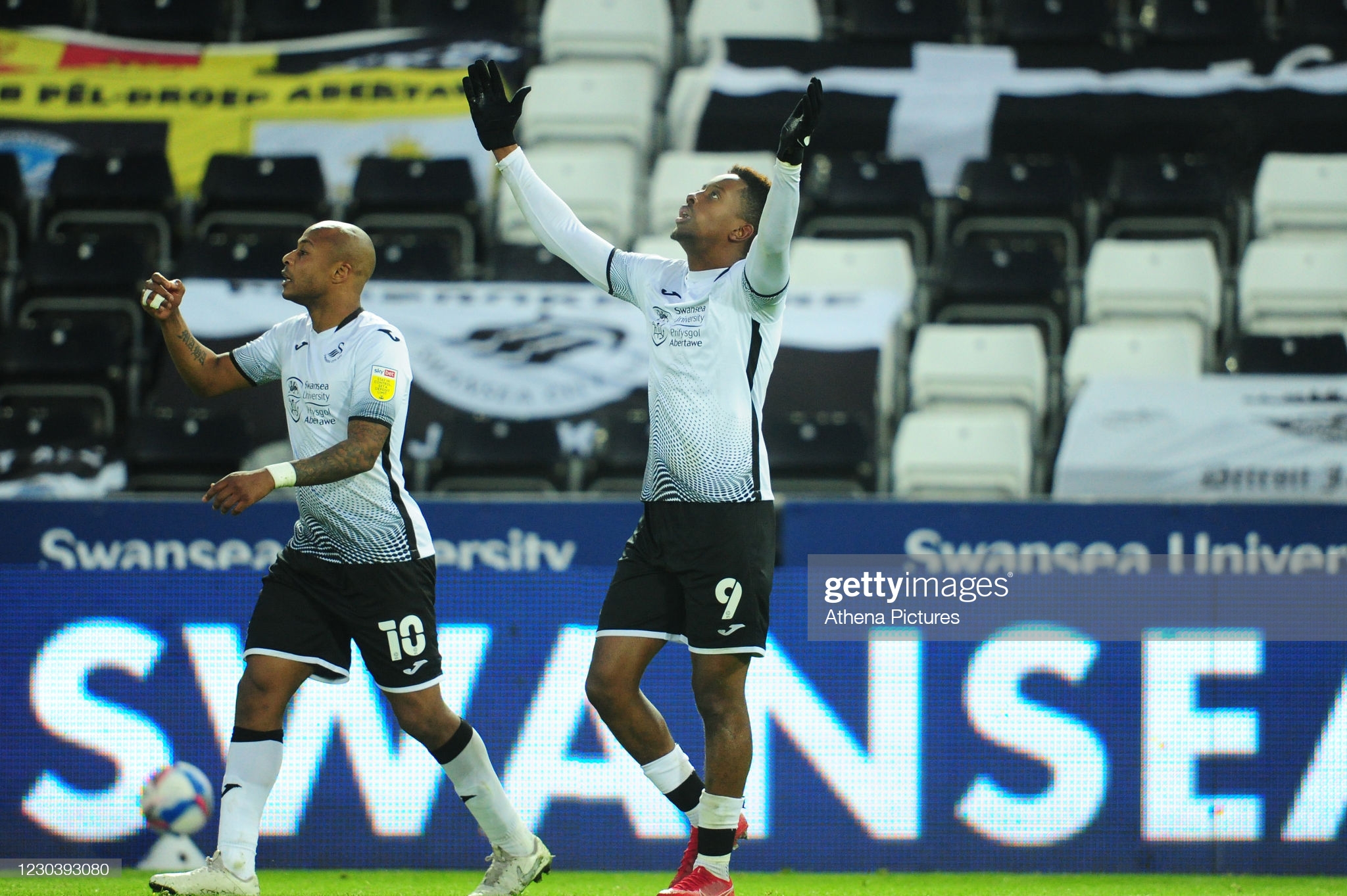 Steve Cooper praised Jamal Lowe for his two goals, but was anxious to spread the love around his squad after Swansea City moved into the automatic promotion places.

Lowe struck twice as the Swans climbed to second in the Championship with a 2-1 comeback victory over promotion rivals Watford.

The red-hot Lowe made it six goals in as many games for Swansea to inflict a first defeat on new Watford manager Xisco Munoz, who had seen his side lead through Tom Cleverley.

“He’s just got to keep going,” said Cooper after Lowe’s goals took his total to eight for the season, following a slow start when he scored just twice in his first 18 matches.

“Even when he wasn’t scoring, he was playing really well. He’s a great lad, works hard and wants to get better. I thought his goals were brilliant.

“The first one was Jam being Jam in terms of getting in a good area and being really positive and the second goal was a number nine goal.

“Korey’s in a crossing area, a brilliant ball, and he’s where he should be, in between the goal in the six-yard box ready to score.

“Jamal will get the headlines I’m sure, but everyone was excellent today.”

Swansea’s fifth win in eight games moves them above Brentford into the automatic promotion places, and six points above Watford who drop to sixth.

“I think it was the right result and the consequence of a brilliant performance,” said Cooper.

“I thought we were by far the superior team. We gave up a bit of territory late on, but that happens when it’s only a one goal margin.

“The idea was to really commit to playing with the ball today. I felt that we could build out from the back, through their formation and find obvious spaces to play in.

“We showed great character and resilience after going 1-0 down against the run of play to not let it phase us and carry on as we were.

“Today felt a little bit like unfinished business from the other night because we knew we played well.

“The lads were brilliant today. They got the right rewards.”

The Swans’ two previous home games had been marred by booing and jeering outside the Liberty Stadium as players took the knee in support of the Black Lives Matter movement.

The club have launched an investigation into the matter and were relieved to see no such pre-match protest this time.

Swansea boasted the best defence in the Championship with only 12 goals conceded prior to kick-off.

But centre-back lynchpin Ryan Bennett was missing with hamstring trouble, and Swansea suffered a new blow in the warm-up when Joel Latibeaudiere was injured and had to be replaced by Ryan Manning.

“Joel unfortunately picked up a niggle in his calf right at the end of the warm-up,” said the head coach.

“We’re gutted for him. He played really well against Bournemouth a few weeks ago, and he’s waited patiently again, came on the other day and did well against Reading.

“Although we were disappointed to have Kyle [Naughton] and Ryan Bennett out, we also know it’s great that Joel isn’t going to get an opportunity. Unfortunately it wasn’t his day today.

“In this unfortunate situation, Ryan Manning gets an opportunity and did really well.”

Cooper revealed Bennett is unlikely to be fit for next week’s FA Cup tie at Stevenage.

“He’s still out with his hamstring. It’s going to be at least another week, so I don’t think he’ll be ready for the FA Cup game.”

Swansea started on the front foot with confidence high after only one defat in seven games.

Connor Roberts’ driving runs were a huge threat down the right and the wing-back flashed a centre across the six-yard box where Korey Smith just failed to apply a telling touch.

Watford responded when former Swansea loanee Ben Wilmot robbed Lowe by the corner flag and Andre Gray almost squeezed home his cross at the near post.

Andre Ayew headed over for Swansea in an action-packed opening but Watford were ahead after 20 minutes.

The home side struggled to clear after being caught out playing from the back and Cleverley’s drive from outside the box was too hot for Freddie Woodman to handle.

Roberts wanted a penalty when falling under Jeremy Ngakia’s challenge, but the Wales international was soon back on his feet to set up an opportunity which Jay Fulton placed narrowly wide.

Swansea continued to push for an equaliser and Ben Foster tipped over from Ayew before making an even better stop to deny Smith.

But the former England goalkeeper had no chance moments later when the impressive Marc Guehi drove forward and found Smith.

He helped it on to Lowe on the edge of the box and the in-form forward curled home his fifth goal in six games off the far post.

Swansea started the second half as they had finished the first and Jake Bidwell had the ball in the net from a Roberts cross only for an assistant’s flag to cut the celebrations short.

Watford did fall behind, though, when Smith’s centre evaded Foster and Lowe showed the predatory instincts which have served him so well in recent weeks by heading home at the far post.

Lowe’s second brought a strong response from the Hornets and Troy Deeney and Francisco Sierralta both had efforts blocked by brave home defending.

Skipper Deeney blazed over at the far post, but Swansea weathered the storm and were boosted in the final minutes when loan signing Morgan Gibbs-White was welcomed back after three months out.

One thought on “Jamal Lowe Was Brilliant . . . But So Was My Whole Team, Raves Swansea City’s Steve Cooper”