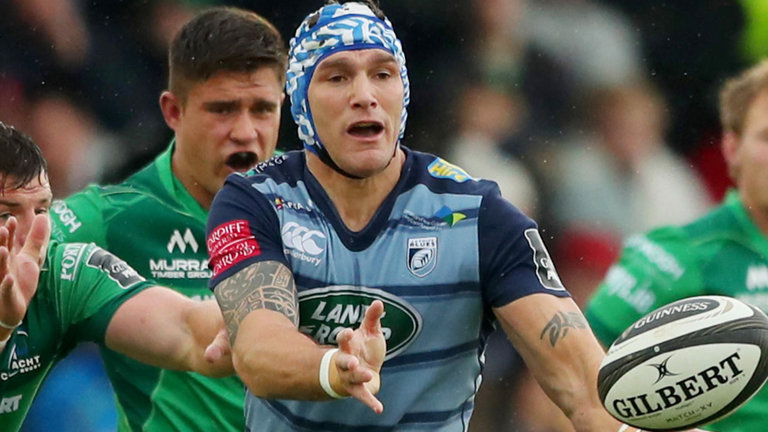 Tom James is fit and firing again after a difficult period and has a Guinness PRO14 landmark dangling in front of him as the new season gets set for the big kick-off this weekend.

The seven-times capped Wales wing is already out on his own as the leading Welsh try scorer in the PRO14 with 45 for Cardiff Blues. He also scored three Premiership tries while playing for Exeter Chiefs during his two season sojourn in England.

The leading try scorer in the PRO14 is Tommy Bowe with 67, with Tim Visser just behind him with 58. The only active player over 50 is Glasgow Warriors wing DTH van der Merwe, with 54, while Ulsterman Craig Gilroy is on 50.

But James compares very favourably with the most prolific try scorers in the tournament with a strike rate of a try every 2.48 games in his 112 Blues appearances. Visser’s strike rate is the best, at 1.70 for Edinburgh, while Van der Merwe is 2.07 and Gilroy 2.46.

Dragons flanker Lewis Evans will bring up his 150th appearance in the competition with his first outing of the season, while Scarlets skipper Ken Owens needs four more games to reach the same landmark.

Cardiff Blues hooker Matthew Rees, who turns 38 in December, broke through the 200 game barrier last season and is now the leading Welsh player having surpassed Phil John (196). His 202 appearances to date put him second on the all-time list behind Connacht legend John Muldoon (254), while two other hookers, Ospreys’ Sam Parry (99) and Blues’ Kristian Dacey (96), should join the ‘100’ club this season.

Three Welsh goalkickers will be hoping to join the ‘500’ club as soon as possible. Sam Davies (498), James Hook (446) and Steve Shingler (439) are all within striking distance this season.

Dan Biggar’s tournament record of 1,585 points looks like coming under threat from Munster’s Ian Keatley this season. The Irish international is currently on 1,418.