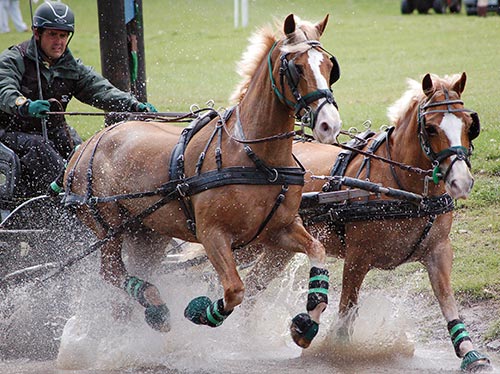 James Broome will go head-to-head with his Great Britain teammates this weekend, when the Welsh carriage-driver competes at the Tristar Welsh National event at Cricklands.

Two weeks ago, Broome – son of show jumping legend David – was part of the GB team that won a bronze medal at the Nations Cup in Holland.

On Saturday and Sunday, he will be in opposition to colleagues Daniel Naprous and Wilf Bowman-Ripley at an event in Crick that counts as both a qualifier for the UK National Championships as well as a selection event for the British team.

“We were all teammates a couple of weeks ago, but now we are trying to beat each other,” says Broome. “It’s going to be good fun.”

The trio hit top form at the Driving Valkenswaard International event in Holland, collecting a four-in-hand bronze medal through their combined efforts.

The British team were rewarded for their consistent performances throughout the prestigious competition, which attracts drivers from across Europe.

The success is even more notable, given that British drivers receive considerably less funding than almost all of the other teams. Oxfordshire-based Daniel and Wilf, who is from Essex, also secured top 10 finishes in the individual competition, with James showcasing his considerable experience in the push for a podium place.

Now, though, they are rivals at an event that spans the weekend, with the marathon in all classes on Saturday and the obstacle cone driving on Sunday.

Carriage driving remains something of a sporting mystery to many, but Broome – who is also a director at the Cricklands equestrian centre – believes this annual opportunity to view the best drivers in the country, as well as observe the novice classes, provides a valuable showcase.

“The sport is still a bit of a secret, but the reaction of people watching for the first time is often to be amazed at the skill level involved,” he says.

“But these are sports people who train every single day and it takes 10 years to get to advanced level. It takes a huge amount of commitment.

“It’s an inclusive sport for all ages and people from all backgrounds. We have one family competing this weekend who span three generations.

“This is also the most testing course in Wales and if the weather is not too bad, then it’s just a lovely day to get out, watch some sport, and even walk the dog.”

As part of the venue events team as well as a competitor, the weekend poses a double challenge for Broome. It’s like George North playing rugby for Wales, whilst also having to worry that fans are safely into the Principality Stadium and that the match-day operation is running smoothly.

“I’ll take that comparison with Geoge North, every day of the week! It is a challenge, but I’m very fortunate in having a team who prepare well and work very hard to make sure everything runs as it should do.

“That allows me to just switch off my phone and focus in hard on my performance.”