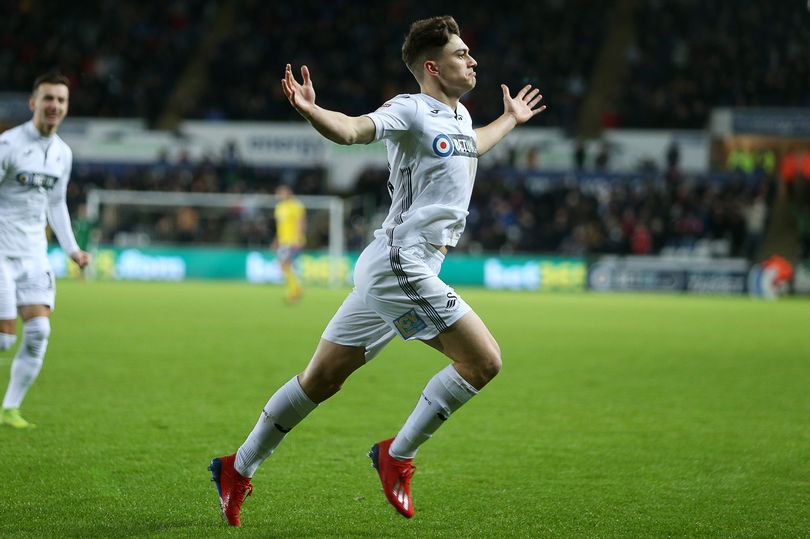 Dan James being linked with £15m switch to Manchester United

Dan James will play at Elland Road next week – for Swansea City against the Leeds United team he looked set to join on transfer deadline day last week.

The Welsh international wing was rested from Swansea’s 2-0 defeat at Bristol City last weekend to get over the disappointment of not making a £10m switch to the Championship title contenders after passing a medical at the club.

But Swans manager Graham Potter says he has no concerns about playing James again either against Millwall at the Liberty Stadium this weekend or at Leeds on Wednesday.

“He’s trained so well this week since coming back. He needed the time to speak to his family and prepare properly, which is normal.

“It was a bit difficult for Dan at the time, but he’s been fine. He has come back in as if nothing’s happened and he has trained really well.

“He’s philosophical about it and sometimes you know these things can happen. It didn’t work out for him, but he isn’t the first guy that’s happened to.”

James has said he was quickly welcomed back by his Swans team-mates when he returned to training.

“It has been a tough few days with everything that has gone on,” he told the club’s official website .

“But I am back here now, I trained today and I really enjoyed it. I do love it here, the boys have welcomed me back and there were a few laughs and jokes.

Potter also revealed that even though long-standing chairman Huw Jenkins quit the club last weekend, talks have begun with James and senior pros Leroy Fer and Mike van der Horn on extending their stays at the club.

Club captain Fer was another player who almost left on transfer deadline day, but instead opted to stay. He is out of contract in the summer, while both James and Van der Horn have year-long extension clauses that the club can invoke at the end of the season.

“We will start the conversations with Leroy, Mike and Dan. It is important from my perspective that they know we would like them to be here and we will try our best to keep them because I like them as players and as people.”

Swansea look like being without top goal scorer Ollie McBurnie at the weekend. The Scottish international has suffered an illness this week and only returned to training yesterday (Thursday).