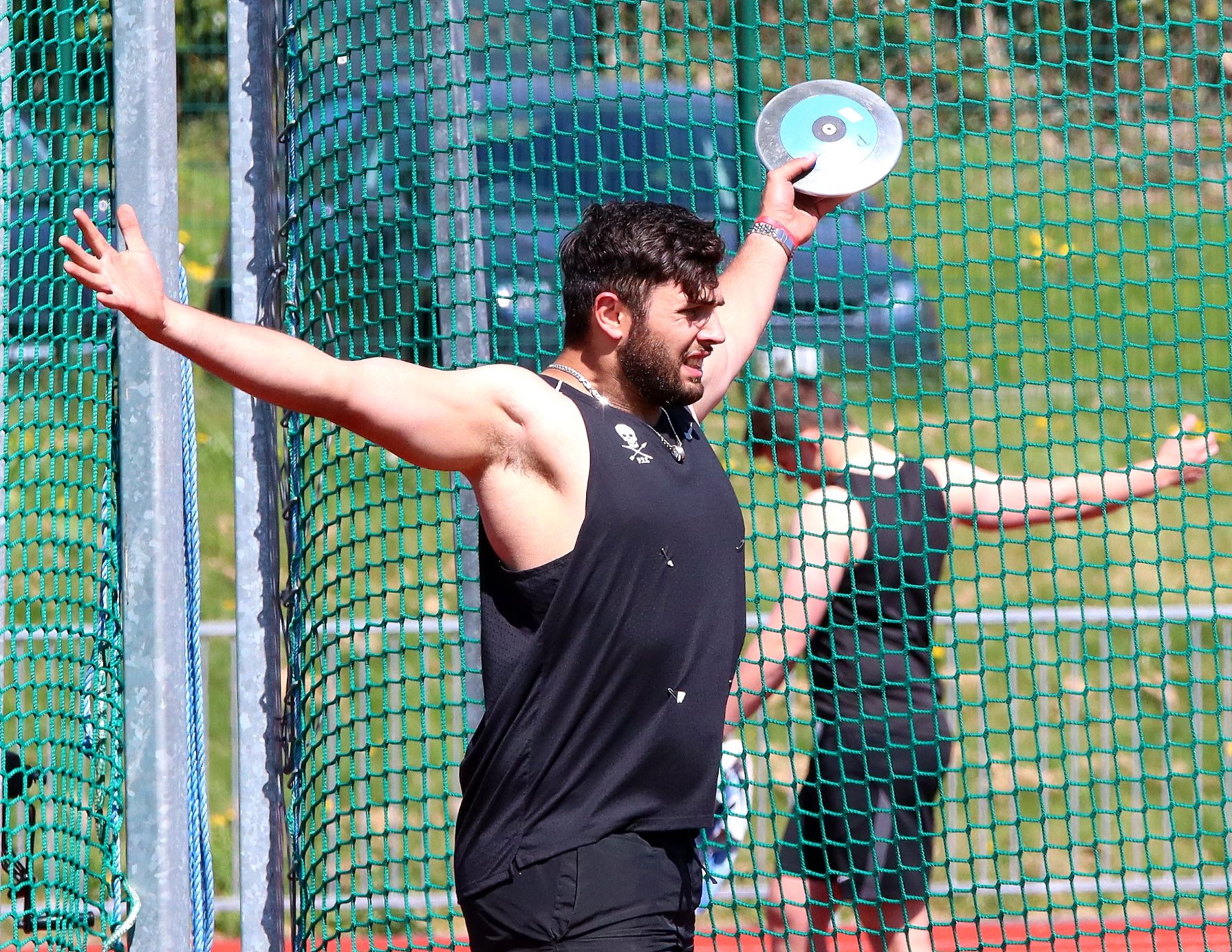 Rising Welsh discus star James Tomlinson is delighted to be back in action after going the whole of last season without competing.

The Pembrokeshire Harrier continued his build-up for this summer’s European Under-23 Championships in Norway with a win in Aberdare on Sunday.

Tomlinson threw a best of 52.39m to win the Welsh Athletics Elite Throws Invitational at the Ron Jones Stadium – this coming a week after he threw a new PB of 55.58m at the Loughborough Spring Throws on April 17.

All a long way from last summer when Tomlinson didn’t compete at all due to COVID-19 restrictions and injury.

.@WelshAthletics regional throws activity back up and running in Aberdare and Carmarthen today. Great day and a big thankyou to the regional coaches that run the sessions and all personal coaches and athletes that attended. #Unite pic.twitter.com/mWXR5sU2Vf

The inactivity was particularly frustrating for the 21-year-old who enjoyed a hugely successful 2019 season during which he captained Great Britain at the European Under-20 Championships where he finished fifth.

Speaking after Sunday’s competition, Tomlinson said: “2020 was awful! But since August of 2020 until now it’s been consistent, it’s been lovely, I’ve been able to flourish.

“Thanks to Welsh Athletics they have allowed the elite status athletes to train – socially distanced of course – so I’ve been able to get some solid graft done without having to worry too much about gym closures and track closures etc, I’ve been really lucky.

“If it wasn’t for Welsh Athletics I don’t think I would be competing again this season, so thanks to them for keeping the tracks open for the elite athletes. They’ve been good as gold, I can’t fault them.

“Last year, I was stuck in Pembrokeshire and I had no facilities to throw and I was battling a little bit of an injury back then, but that’s all in the past now. We move forward and we are 10 times better off than we were 12 months ago.

“Training has been amazing. I’m up in Loughborough once every four weeks to see my coach and it’s been consistent the last six months, there’s been no injuries, touch wood. I’m progressing nicely and there’s a lot of good stuff happening in the background, so I’m very happy.”

“There were several positives but some external factors got in the way today, but overall I’m happy. It’s an absolutely beautiful track here and the wind can be brilliant or awful because it comes off the valley.

“Today we were blessed with quite a nice wind, it’s unfortunate I wasn’t able to utilise it fully but it’s a lovely place to throw.

“This season, the main target is the European Juniors in Norway, that will be in July, fingers crossed, depending obviously on how the COVID situation goes.

“So we aim to peak in July sort of time and perhaps compete at British Champs and maybe get into the top five there.”

Asked what his target was for the European Under-23 Championships in Bergen, Tomlinson said: “Top eight? It’s early days yet, I need some consistent throwing over the next month and a half.

“I’ve always backed myself in a championship performance, I’m not going to write myself off by any means. I usually find form when it matters.”

Looking further ahead, Tomlinson is setting his sights on a place on the Welsh team for next year’s Commonwealth Games in Birmingham, having competed at the Commonwealth Youth Games in the Bahamas four years ago.

“Absolutely, 100 per cent,” said Tomlinson. “Get the qualifying this year and then travel to sunny Birmingham next year!

“It’ll be my first senior Welsh vest, so it’s going to be great and hopefully my whole training group will be there . . . Jac Palmer, Harrison Walsh . . . I have no double they will be there as well. It will be a nice group thing.”

Birmingham is a long way from the Nassau, where Tomlinson won silver at the youth version of the games.

But he says: “The location doesn’t matter, the medals are all that matter. I don’t really care where it is, everyone is competing in Birmingham.

“It’s obviously nice to go away to places like Australia, I’ve been to the Bahamas in the past, you take what you are given and given the last 12 months let’s just be grateful that we’ve got a championships on the horizon.”

There were a number of other Welsh athletes with their eyes on a place at next year’s Commonwealth Games competing at Aberdare on Sunday.

Decathlete Curtis Matthews, who is chasing a place at a third Commonwealth Games having competed in Glasgow and on the Gold Coast, took part in both the discus and the shot put.

Matthews registered 43.68 in the discus before claiming a big personal best in the shot.

The Cardiff athlete celebrated a best throw of 14.76m, surpassing his previous best of 14.69m achieved back in 2017.

Also competing in the shot was Welsh Champion Adele Nicholl, of Birchfield Harriers, who threw a season’s best 15.79. Another Cardiff multi-eventer, Lauren Evans, threw a best of 9.67m.

The javelin saw another Welsh competitor from the 2017 Commonwealth Youth Games taking part.