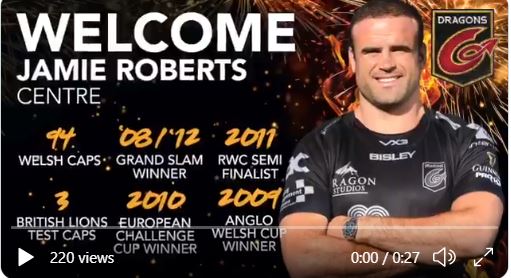 Jamie Roberts’ decision to join the Dragons has been taken just weeks after he said he would “struggle” to join any Welsh team other than Cardiff Blues.

The former Wales centre – arguably the only current Welsh player who can boast a career to compare with that of Alun Wyn Jones – has left the Blues wondering how his return to the Arms Park somehow escaped them.

Roberts, 33, has opted to join the Dragons following a seven-year stint outside of Wales during which he played for French club Racing 92, English giants Harlequins and Bath, before a brief spell in South Africa with the Stormers.

The Blues opened talks to re-sign him earlier this summer, but were told by the Professional Rugby Board that all moves to bring in new players had to be put on hold due to the coronavirus pandemic.

Since then, the Dragons have moved quickly to add him to a list of new recruits that includes Nick Tompkins, Jonah Holmes and Joe Maksymiw.

In March, Roberts spoke of his desire to finish his career at the place where he made his name and said: “I told myself as soon as I left Cardiff I’d want to play there again before I finish my career.

“I want to give back to Welsh rugby as a player or even after I’ve retired. The Blues gave me so much not just as a player, but as a person. They allowed me to play for Wales. I’d love to take them back to where they deserve to be, because they aren’t there.

“They are a capital city side, but they aren’t at the top table at the moment. They are a club who should be. Having been there I’d like to see them there again and help them as a player.

“If the opportunity to do that is there then I’d love to explore that.

“I’d struggle to play for another Welsh region.”

Four months on and Roberts has chosen to join the Dragons where he will join forces with Tompkins and Holmes in a new-look backline under director of rugby Dean Ryan.

Owned by the Welsh Rugby Union, the Dragons have had the lowest playing budget of any of the four regions for some years, but now it appears the Rodney Parade region are weathering the current financial storm far more easily than their rivals.

I’ve been very fortunate to have achieved the majority of what I set out to achieve in the game. I hope I can now harness my experiences from across some of the worlds top leagues and help the younger players @dragonsrugby strive to achieve theirs 👊🏼 huge potential in the group pic.twitter.com/pQ1oVvVuRh

Having confirmed his arrival, Roberts said: “Before playing through the junior ranks in Cardiff from the age of 15, my love for the game was born on the terraces of Rodney Parade.

“My Dad, Norman, has been a lifelong Newport Rugby supporter and for many years my brother and I would frequent the terraces on weekends and harness our love for the game I’ve been so fortunate to play professionally.

“No one would be prouder than him that I’m coming to represent the rugby supporters of Gwent.”

Ryan said: “It’s great news that we are bringing someone of Jamie’s quality to the region and we know he will make an immediate impact for us.

“He remains an ambitious and driven player and is looking forward to coming into our environment.

“To have his experience on the pitch will be a great addition to us, and he will also be an excellent mentor for the younger players in our squad.”

One thought on “Jamie Roberts In March: “I’d Struggle To Play For Anyone Except Cardiff Blues” . . . August: “My Love For The Game Was Born On The Terraces Of Rodney Parade””