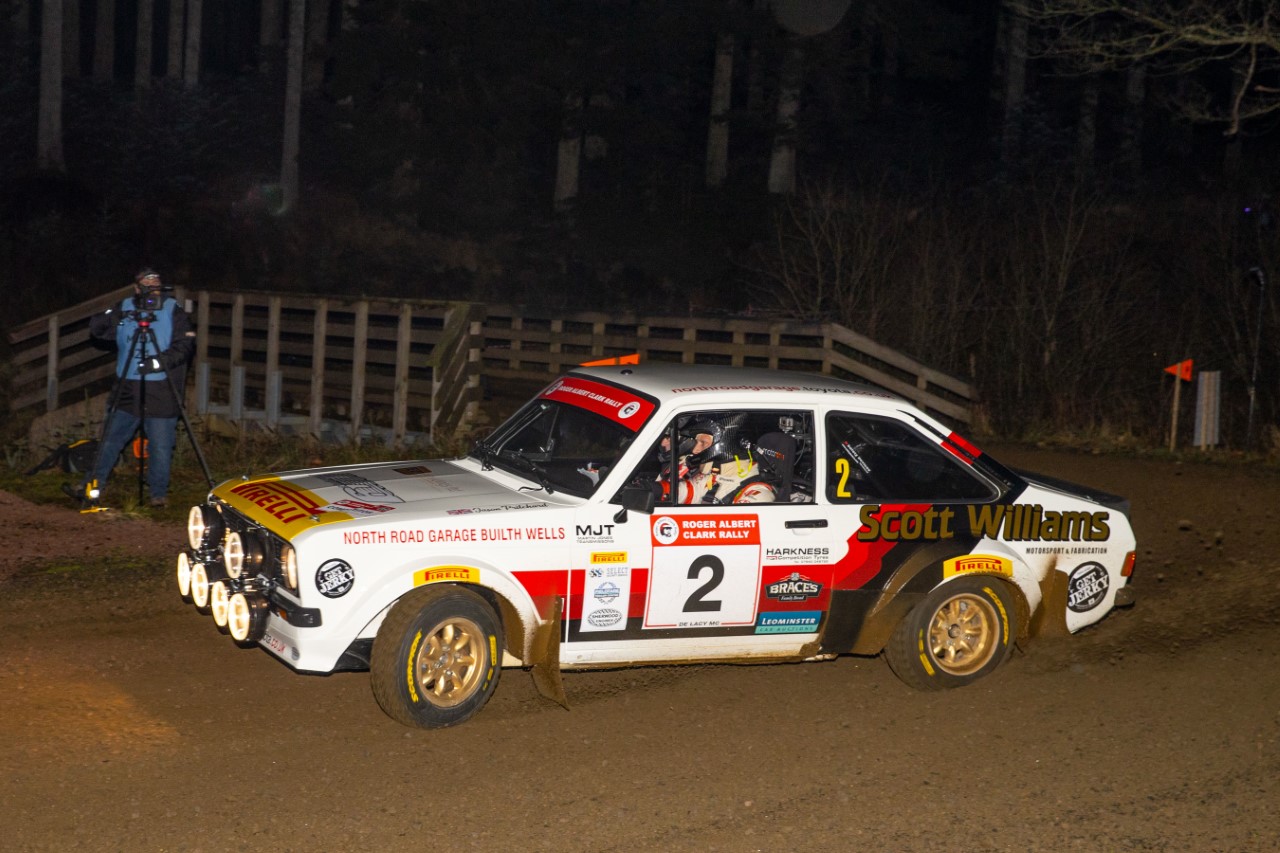 With Jason Pritchard in a healthy lead and Osian Pryce rapidly closing in on second place, it looked like there might be a magnificent Welsh one-two finish in Carmarthen come the end of the five-day Roger Albert Clark Rally.

They had survived Storm Arwen – which had caused wild blizzards in Kielder Forest and the entire Scottish middle leg to be cancelled – and had reached home turf for a final push to glory.

The duo had started as joint favourites for victory, but it was Pritchard who made the better start.

Co-driven by Phil Clarke in a Scott Williams Motorsport built Escort RS1800 Mk2, Pritchard set the fastest time (despite an early misfire) on all four of Thursday’s night stages to establish an 18 second lead at the end of Leg 1.

Storm Arwen threw all it had at them on Leg 2, but by the end of Friday’s longest day of the event, Pritchard had extended his advantage to 37 seconds.

Some stranded competitors had to sleep in the Northumberland forests overnight in their cars, their route cut off by snow and fallen trees.

Cancelling Saturday’s Leg 3 in Scotland on safety grounds was a sensible move, leaving crews to drive down to Wales for the restart from Welshpool on Sunday morning.

But snow on high ground and an overnight freeze made the Welsh forests treacherous and in Dyfi (SS23) Pritchard’s dream of winning the RAC Rally came to a spectacular end.

“It was not to be again on the Roger Albert Clark,” said Pritchard.

“Soft mud in a logging section put us sideways and I clipped a log pile and rolled out.

“It was all over in seconds.

“Thank you so much to Scott Williams Motorsport for not just building a car that’s led from stage one, but a strong car that Phil and I walked out of.

“I can’t thank Scott enough for this opportunity and I’m heartbroken that I didn’t give you the result you all deserved.

“Thanks to all the organisers and volunteers for keeping this event going during difficult times.

“To the team and everyone who’s supported me on the event sorry and thank you.

Pryce’s start was hampered by brake issues, but he still completed Leg 1 in second place, 33 seconds behind Pritchard.

Problems with the pace notes slowed him on Leg 2, leaving him in third – now almost four minutes behind Pritchard.

Arriving in Wales, Pryce was focused on closing the 3mins 27sec gap to Paul Barrett, although that became a charge for victory when Pritchard retired.

He and co-driver Noel O’Sullivan were flying in their RallyXtreme-prepared Ford Escort RS1800 Mk2 and had closed the gap on Barrett to just 1min 46secs at the start of the finish and final leg.

Unfortunately, on Monday’s opening stage through Walter’s Arena a front stub axle sheared on braking, sending the car spinning into a bank.

On the very same stage, Barrett and co-driver Gordon Noble slid wide at a corner and rolled into retirement.

With the top three out, Ryan Champion/Craig Thorley, who had settled for fourth a long time ago, won the event in their Porsche 911.

The top Welsh competitor home was Max Freeman, who co-drove Rhys Yates to fifth overall in an Escort Mk2.

There was success too for Malcolm Rich, who won his class and finished 28th overall in a Ford Anglia.

He was co-driven by Ryland James, who has now navigated competitively in seven different decades – and well before his 70th birthday too!

Having crashed on the first night and been forced to sleep their Escort Mk2 the second night, Brynmor Pierce successfully guided BBC’s Top Gear presenter Chris Harris to the finish.