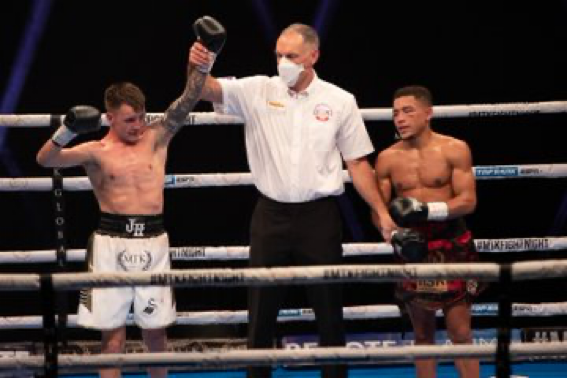 Jay Harris claimed a unanimous victory over Marcel Braithwaite on his return to the ring.

Jay Harris was made to battle all the way as he made a winning return to the ring in the MTK fight night.

The Swansea flyweight said he was ‘buzzed’ after a stinging left-hook from Marcel Braithwaite in the fourth round rocked him to his roots.

But Harris responded in what was a superb battle at the Production Park Studios in Wakefield on Sunday to get the unanimous decision from the judges.

It was Harris’ first outing since his valiant world title bid earlier in the year – but victory should take him a step closer to another title shot.

A massive left hook from Braithwaite rocks Harris in round four!

📺 The live action continues RIGHT NOW on @ESPN+ and @IFLTV.

“I was a bit sluggish and got caught with a lot of overhand rights where I shouldn’t really have got caught.

“I got punished at times, and credit to Marcel. He was as game as they come and gave me a good fight.

“In round four it was a good shot he caught me with and I felt it. It buzzed me but I managed to recover and see the round out.”

Harris’s overall class and work rate impressed the judges who scored the fight unanimously in his favour by 98-92, 97-93, 98-93, after a tremendous showing from both men over the 10 rounds.

The fight had been due to be for the Commonwealth title held by Harris but Braithwaite scaled well over the limit at a check weight this week.

Harris is ranked No 5 by the WBC and No 6 by the WBA, but knows he would have to improve if he were to get another world-title shot.

But Harris said it was good to get back into the ring in his bid to earn another world title shot and an opportunity to get used to fighting under the COVID-19 restrictions.

“It was my first fight back after eight months and it was a whole new experience for me,” said Harris, who earned huge praise for his performance in defeat against WBC champion Julio Cesar Martinez in February.

“Credit to Marcel. He did a very good job, but I know that I have to perform better than that if I want to mix it at world level.”